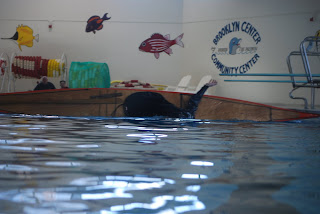 I took J & K to the pool session today, basically to make sure they could be safe this summer at the cabin. We practiced wet exiting with and without a spray skirt, then reentry using a second kayak (pool wall) and then the cowboy reentry. K then decided to try paddling while standing up which she could do very well once she got the hang of it. The girls then practiced the static brace position, they were not able to right the kayak from the position but they hung there for many seconds. I practiced rolling their new kayak, doing a regular roll (with no spray skirt), an extended paddle roll, a reentry and roll, and then practiced my static brace. The new kayak was easy to right, and seemed to flop back upright quickly when provoked to. The girls were not able to fully experience the rudder due to the limited length of clear water in the pool,and I didn’t bother trying it. The kayak turned very well when put on edge, I was easily able to turn 180 degrees with one extended paddle forward sweep stroke. 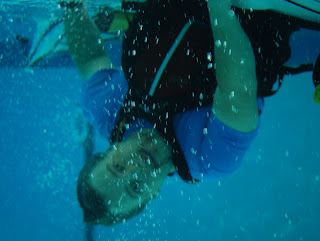 While the girls were showering off (K got very cold) I took my Nikon in a dry bag into the pool and took a bunch of pictures, I was pleasantly surprised how well they turned out. You can see the whole set here at this link. I spent some time photographing Jeff underwater, as well as attempting to capture all the action, with people teaching, practicing rolling, and practicing multiple kayak rescues.

I am not sure if Jeff is smiling, or manically making a weird grimace, either way he looks like he is having fun.