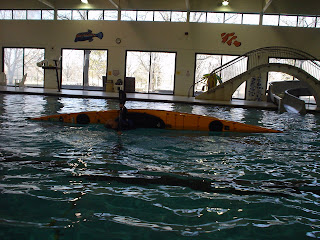 Today I went to the Inland Seakayakers Pool Session and practiced rolling my NDK Explorer, which went well, at least on my on side. I messed up once but recovered on the second attempt. I was also lucky enough to be able to try out a new kayak that was recently built by a club member as a replica of an early Greenland skin on frame kayak, but constructed out of plywood. It was extremly easy to roll (even without a spray skirt!). 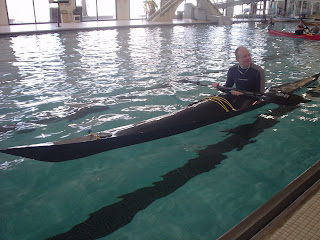 I then continued my practicing of the sculling brace, Tony assisted me, I found it tough to relax lying on my back facing the roof and not sculling, I will need further work on that. My father came and took the low res video and the two stills below. The camera did the best it could in the humid conditions. We left early as I am still nursing a cold and have a long flight to CA tomorrow for work.

Progress on the floor