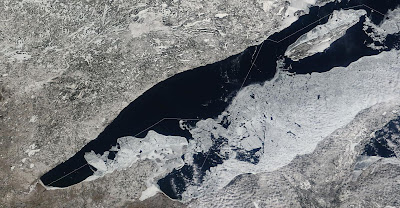 I naively had never considered the fact that large amounts of ice form in lake superior during the winter, I came across this satellite image take March 19th 2009 showing clearly the ice along the southern shore of the lake, a few days later these slabs of ice had fragmented and drifted apart, unfortunately the cloud coverage made the imagery less clear. the MODIS web site has a image per day for the entire country in 250M resolution, a tremendous asset.