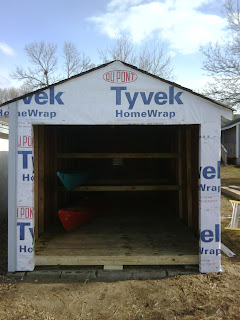 Today we got up early and headed over to the cabin for our last day before my folks return to the UK for the summer. We started on the inside to keep the noise down and not wake the neighborhood. We connected up the new bath tub, which of course then leaked from the old drain P-Trap where an ancient rubber ring had given up the ghost, I will have to fix that tomorrow with yet another trip to Homedepot. Yesterday when we made our daily visit to Homedepot a group of the store workers were gathered together and then finally they came over and started talking to us, they had realized they had been seeing us for the past 20 days and wondered what we were doing, I think they though we were kidding them when we told them everything we had done. 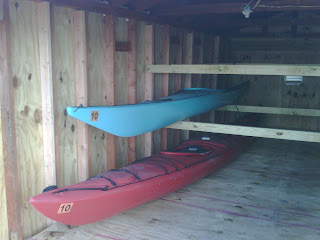 Last night we went to Menard’s to pick up some siding to smarten on the kayak shed, unfortunately a diode failed on the starter motor on BART (Big Ass Red Truck) so Dad froze while removing it lying on the black top in the parking lot in sub-freezing temperatures. He was triumphant and we finally were able to pick up the siding and made it home just before 10pm.
We spent this morning hanging a floor in the shed, 15/16 inch pressure treated plywood, supported by many many 2 by 4 frames, it looks great. We also put in a series of cross beams to support the kayaks and loaded a couple into it to see what it looks like. The afternoon was spent learning how to fit siding, we completed one of the long sides and also the back of the shed which was complex due to the roofs joining and having to mount a vent as well. 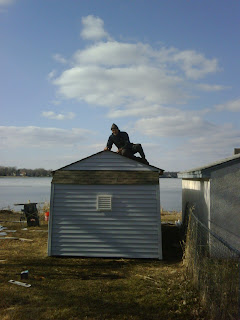 While we were working away in the morning the ice floating on the lake kept making the most amazing creaking groaning and cracking noises, a cross between a whale and a science fiction movie. We finished the day by putting the truck away for the summer, its done its job for now, having moved all the materials we needed to get the cabin to its current state.
Time to sleep now….