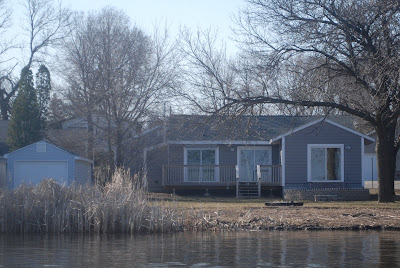 This morning I decided it was time to take the first trip of the year on the lake. I put on my dry suit for its first real outing, it was far less uncomfortable than I expected, I wore thermals underneath. With my neoprene skull cap and gloves I stayed just right in the bright but crisp morning.
I took the explorer out across the lake to the far shore, turned around and then went up the creek to the weir, I then explored a couple of the short tributaries flowing into it. The girls are going to have a blast navigating up their this summer.
There were about ten kayaks on the lake at peak during the day, several were fishing early in the morning, and I again saw fish jumping for flies. 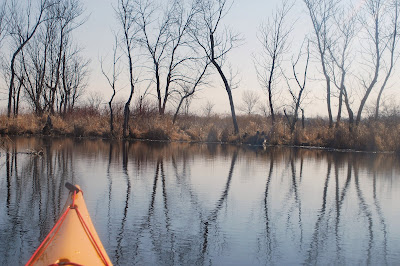 There was pool water still in the explorer’s day hatch and remarkably it was frozen when I launched. It had melted by the time I came ashore. I took the camera with me, the lens cover on the dry bag is getting scratched so I am going to have to attempt to polish it soon. The pictures turned out okay though, at the corners the get blurry and sometimes the camera does not seem to know what to focus on. I completed the floor in the master bedroom today, and then cut the moulding and quadrant to length, mitred the ends of each length, and then painted each with two coats of semi-gloss. 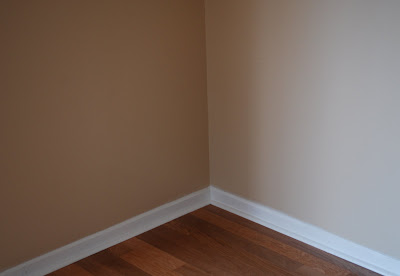 Once dry I fitted them around the room. It did not go as smoothly as planned but with suitable applications of caulk and speckle all was good. I am pleased with how the room looks. I still need to fit thresholds between the living room and the bedroom and across the sliding glass doors. And of course paint the window and door frames – maybe J’s arm will let her do that tomorrow.
At about four o’clock I could smell burning and imagined a neighbour was having a bonfire, the next door kids started yelling so I looked out and saw that someone had set fire to the reeds on the bank of the southwest shore. Fire trucks came lots of interest from the Police and the local TV station. The flames quickly died away and peace returned again.

Tomorrow not a lot will get done, family lunch at my sister-in-laws house. I have decided to remove and replace the dry wall tape I had used as it was ballooning. I have some mesh tape designed to stop that so I am hopeful this time it will work better. The kitchen is in need of cheering up, as is the bathroom. I intend to do another coat on the bathroom and kitchen walls to repair all the damage if possible. Then move back to the plumbing to sort out the bath faucets.

Then we are six