Paddling with the Mrs 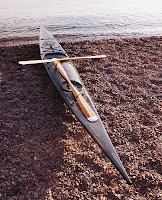 This weekend Mrs. C. and I had four opportunities to get afloat together. The first day we had been hoping to paddle along the cliffs by the Sea Arch, unfortunately we did not have time to paddle up the coast from the put in at Silver Bay and when we got to Tettgouche State Park there were a “huge” number of steps down to the beach and a certain someone decided she could not help get the kayaks down the steps (I don’t blame her they were steep). Not to be deterred we decided to paddle out from Grand Marais harbor that evening, it was my first time launching the Tahe Greenland through waves. I launched J easily through the surf with her skirt in place. You may ask why I didn’t do the same but the pebble beach was too steep for me to try shuffling into the water with my skirt on, and the small cockpit does not allow a bum first legs later style of boarding. Holly cow did I get wet! The low cockpit edge allowed all but the smallest wave to roll into the seat, oh joy when it was 45F! after I got afloat safely I emptied the kayak, this allowed me to get warm again….We paddled out of the harbor and into Superior, the waves were around 2 feet peak to valley, and about 20 feet apart. being close to the harbor walls a great confused sea was created otherwise known as Clapotis, J found it a bit too exciting to stay in the waves long so after about 20 minutes we turned around and surfed back into the harbor, it was a great way of trying out the Greenland without it being too threatening. 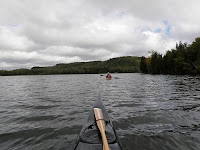 The following day we discovered a fabulous deep lake inland (Lax Lake) surrounded by woodlands, despite the brisk breeze we circumnavigated the lake and enjoyed the trees. The water was amazingly clear, and I heard my first Loon call. We launched at a public kayak ramp which also had a wooden dock. I had been reading about how the Greenland people launch not from beaches but rocks and Bergs to avoid getting wet, s I tried launching from the dock instead, the water was very clam, and I managed it all until the last wiggle and I got another seat full…. much better than the beach but still a lot to learn about staying dry!

Our third and best paddle was out of Little Two Harbors, the beach by Split Rock lighthouse. We had an awesome paddle in the bright sunshine, out under the lighthouse, playing amongst the rock garden and then circling the island. We took numerous pictures of each other (a few turned out!) Again the water was so clear we could still see the rocks under us when we were 100 yards off shore. The Tahe felt great in the waves, although it was rather disconcerting at times to have waves break completely over the stern deck. 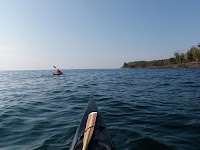 On our last day we hiked the falls at Gooseberry river and then launched from the rocky beach, it required some timing and a good push from me to get J out between the rocks and through the small breaking waves. I timed it well and actually launched dry in a break, getting the spray skirt on before the first wave hit me. We paddled south for a couple of miles, enjoying the scenery before turning around and landing at the mouth of Gooseberry River. I landed at a different gravel beach and then portaged back to the original beach as I did not fancy surfing in between the rocks in a fiberglass hull. I helped J in and she was easily able to slide through the rocks in her poly-prop hull smiling and very glad to be ashore out of the rolling swell that was making her feel a bit queasy. All in all it was four wonderful paddles, in great conditions.