A couple of people saw my new Greenland paddles in my car recently and asked what they were. Until a couple of weeks ago I had never paddled or rolled using one. But I went wild on my trip to Michigan and bought three different Greenland style paddles.

Betsie Bay Kayak is one of the few companies that I have ever found that has had any in stock, I purchased the Greenlander, Storm and Rolling Stick, here are the descriptions from the Betsie Bay website:

Greenlander:
Recommend for ‘Greenland style’ kayaks with narrow beam (less than 23”) and low decks (less than 12”). Higher hung seats may necessitate longer paddles. The Greenlander is our workhorse touring paddle. It’s size is the most effective for long distance paddling when used with a narrow beam, low shear kayaks. It allows a short, quick stroke at a cadence and effort level that can be maintained all day. Average weight is about 30 ounces. 84″ x 4”

Storm:
The Storm paddle was used by the Inuitin very rough and windy conditions, using the sliding stroke, In modern touring use, the Storm is an excellent spare, fitting on the rear deck. It is an outstanding paddle for surf play and rolling. 72” x 4”

BBK Rolling Stick:
A small hand-paddle based on the shape of the Inuit atatl (spear throwing stick), which could be used for rolling if the paddle was lost in a capsize. It is an excellent tool for learning the Greenland hand roll. 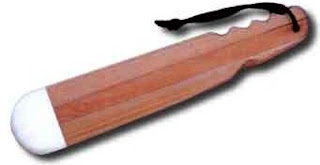 I have used the Greenlander and the Storm, I watched a few videos of the slide stroke prior to using the Storm, holly cow was it tough at first, but after ten minutes I got into the rhythm.

Apparently I found time to relax