Cockpit covers and lowering the SUT

Along with accomplishing many other things weekend I made my first two cockpit covers for the Tahe on Saturday. I was unable to find any thin neoprene so instead I used lightweight rip stop nylon, $5 a yard and I can get three covers from a yard. The first (let’s call it a prototype) worked but was not the best. I made them by first cutting out a newspaper template of the outer cockpit rim, I then drew around the template onto the nylon with chalk, I then added two and a half inches outside that and drew a second line which I used as my cutting line. My first attempt I simply folded the edge over to the chalk line and attempted to sew around the edge about half inch in from the fold. It was very difficult to keep the fabric aligned with the inner line; I was not able to neatly pleat it, the slippery fabric finish made it particularly tricky. Once I had circled the cover once I added a second row of stitches this time much easier as the fabric was held in place. I fitted this one with a length of string fed around the edge to see what the fit was like and was pleased with the effect (but not the seams/sewing). 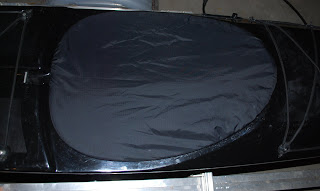 The second attempt was much better, I got some 1/6th inch bungee cord and then folded the nylon over the cord and pinned it very close to the cord, creating a clean tube around the edge, and trapping the pleats in place around the tight curves at the front and rear cockpit corners. I then was able to run the sewing machine foot right up next to the cord and get a smooth line of stitches and consistent pleats around the corners. I revered direction and added a second row, and finished each end of the tube with several extra rows of stitches for strength where the cord exited. I threaded both ends of the cord through a plastic stopper and tied the ends of the cord together. I fitted the cover to the kayak and then tightened the cord so it was snug. I towed the kayak to the cabin yesterday and the cover stayed firmly in place. I will be fitting a webbing strap and clip to the front soon so that I can clip the cover to a deck line just in case it decides to blow off. When I get the sewing machine out next time I want to try and make a cover that is just a little bit tighter width ways, other than that I think its pretty good – although I need to find a way to finish the edge of the nylon underneath so it doesn’t fray.

This morning I went for a paddle around the lake, I put on my thermals and my dry suit and fleece lined skull cap, all very dramatic, but I stayed warm. The air temperature was 45F and there was a 10-15 mph wind blowing. I am not sure what the water temperature was, chilly is the most accurate I can be (note to self get a thermometer). I wore my standard leather palm Warmer brand gloves – not a good idea, next time I will wear my thin neoprene gloves. After circling the lake I stopped 20 yards off shore and rolled once – successfully. And then went ashore to warm up. I was completely dry even my hair under my hat, I guess my face and neck were wet imeadiately afterwards…. Next time I will wear thin fleece on top of the thermals.

Last night a team at work was performing a lot of maintenance in one of the data centers and there were some unintended consequences which kept me up until just after 2am. I was crabby today (lack of sleep does that to me) and so I was banished to the sofa for a nap this afternoon. 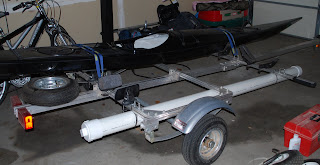 After dinner (fish tacos) I had an inspirational idea about how to modify the SUT and have now lowered the kayaks to about 18 inches off the ground, a much better height than the previous 30 inches. I also replaced a bunch of steel bolts with stainless ones. It’s nice that home depot is still open until 8pm on a Sunday. This photograph also shows clearly the paddle carrying torpedo slung under the rails, I have not yet worked out how to deal with the end cap, either with a lock or a better handle to open it, the thread tends to get very tight – it is meant to be water tight after all.
Looking at this picture makes me think I should replace the rear hydraglides with the same rubber supports as I have at the front, I don’t realy need to slide the kayaks forward I just drop them into place. The hydraglides offer little to no support sideways.

Kayaking with an iPhone