The kayak is black the shock cord is black so the deck beads had to be black, I ordered some from the local West Marine store – they took forever to arrive – I should have used the internet…

Anyway this evening after a recuperative nap I went out in to the garage to try fitting them to the Tahe, which then got me wondering what was the optimal layout for deck beads. Obviously it is very dependent upon the layout of the deck lines and shock cord. There are two things I know I want to be able to deal with single handedly one is removing and replacing the rolling stick and the other is removing the storm paddle and replacing it with the greendlander. 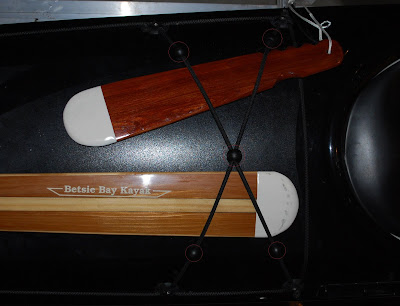 I decided upon the layout above (the beads are circled in red to help highlight them), a single center bead connecting both of the diagonal cords, and four corner beads on the top of the deck chine. This appears to make it easy to slip the tip of the blades under yet still retains tension on the blades once they are released.
Does anyone have any recommendations?