Thanks to Alex Pak for his excellent coaching I was able to obtain survivable rolls now of both the Armpit roll and the Standard roll with paddle behind neck. He pointed out the obvious yet elusive fact that these are all basically the same roll. He also made my standard roll much smoother getting the sweep started earlier and with the right action out not down, and the hip movement started as soon as the sweep starts.
The complement of rolls/maneuvers from today’s practice:

I nailed the butterfly roll at the first attempt thanks to online instruction from Helen. The Tuilik was a great help and made several rolls easier due to the buoyancy as well as massively increased the ability to get out of the cockpit, I was surrised to feel how different it was without a shirt holding me in.
When performing the side skull I was also able to slide in and out of the static brace without holding the paddle, this felt awesome as it felt like the begining of hand rolling, or more precisly the end of the roll. I also found it easy to roll into the static brace using either the butterfly or standard roll to get there.
I attempted to use the camera mount that I designed but unfortunately the mount pushed on the camera controls and prevented it from recording so back to the workshop to dream up an alternative mount. 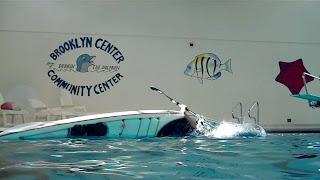 Postscript: This was not the order that I had planned on learning but it worked!