This pool session I knew I had to take it easier; I clearly overdid it on Wednesday trying too hard and hurting myself in the process. I started following Jeff B’s advice and practicing a lot of hip flick while doing a static brace I was able to get the kayak over a fair way and recover successfully. I then practiced all my previously learned rolls, ensuring I still had them licked. I then decided to add in an additional layback roll, the crook of the elbow roll which entails performing a standard roll but with the paddle hooked in your arm as if you are flexing your biceps, I found this easy, trusting my sweep and laying back just like the other layback rolls I have learned to date. I then returned to the chest sculling, I performed this a lot and then started doing a simple fall over and recover using the same position and technique at right angle to the kayak. Once I had managed that successfully a few times I progressed to the reverse sweep stroke falling face first into the water, I found I was able to hit this one most of the time. And then the final step rolling backwards with the paddle hooked behind the stern of the kayak, I managed to get upright a few times but required an occasional scull, I would definitely not say I have cracked this one yet. For a brief moment of fun I decided to practice paddling upside down, I was this time able to progress many feet in a straight line by watching the lines on the bottom of the pool to ensure I was not turning in circles like the first time I tried. I am not sure what the purpose of this maneuver is, but I suspect the girls will find it very funny if I do it next summer in the lake while they are watching.
During the week I had carved a new foam masik several inches thick, when in place it ensured that I had no problem feeling the kayak and I had none of the uncertainty of waggling my knee and hip around in search of leverage. The masik did however make the kayak a very tight fit for others to try.
I recorded some video I will upload later using an Olympus Stylus Tough 6000, I also recorded a few of my rolls with the strom paddle mount and my Flip Ultra HD, I am a bit dissapointed in the lack of wide angle lens, I think that the suction cup mount on the bow may work better as my head is constantly out of the picture using the current system. 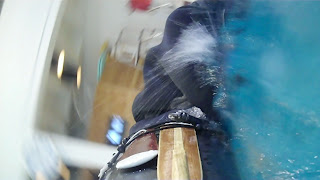 I took this still from the Flip video – I think it should be titled commited to the roll – I dont think I am coming back up at this point!
A cool thing happened this session, on three occasions I rolled up on my off-side using a standard roll to recover from a failed roll attempt of a more advanced nature, it was cool to not have to bother with setting up on my on-side and just to be able to trust my off-side roll, especially cool that I did not even think about it until after the fact.
In a fit of exuberance at the end of the session I decided to try the quick succession of standard rolls to see how many I could complete before I ran out of 10 seconds, I managed 6, which I my first attempt was not bad I thought.
My roll/maneuver list now has extended to the following: