At Sunday’s pool session I made a fair amount of progress, two news rolls to the list, possibly three if you stretch it a little. First off my hand roll, front to back, is getting very strong, so I kicked it up a notch and turned it into a clenched fist roll, front to back.
The second bit of progress was the rolling stick roll, back to back – this is also known as a mummy roll when performed without the rolling stick.

Working on the back to back roll without the stick bought to Alex’s attention that my head angle is all messed up. I am tending to lead with my head, I am looking to the left when I should be looking to the right, and this is then tending to make me engage the wrong leg slightly. The end result is I can get the mummy roll up to the point where I need to get my head onto the back deck, then whoops ….. I lose it. When doing the roll it is clear as a bell that it’s not going to work at that point, but I need to relearn the muscle memory. I went back to the basics practicing standard and angel rolls to get my head in the right place. It’s going to take a while to relearn it. The pool session was very well attended, a training session was being held on bracing I think for those that wanted it – many did. 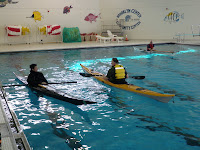 Alex leant me his magic rolling kayak so I could try some of the more advanced rolls in it, he describes the kayak as a plank or a flopper as it is so flat that once it is partially over it wants to help you and flop down. Using this kayak I was able to get the elbow roll into the static brace position, but I was unable to get onto the back deck, this is a combination of my head issue and not having enough control of my oblique’s. The stomach muscles I can work on out of the pool, but the head is going to require some more practice.
Unfortunately because of travel and other schedules I will not be rolling for two weeks, but there is another session on the 7th that I hope to be at.
Alex tri3ed out my Tahe and was also struggling with the elbow roll, we collectively decided it was time to take the seat out of it to lower my bodies center of gravity, which in turn should help with increasing the righting moment during the advanced layback rolls.
By the end of the session I was tired and Alex reminded me I needed to work on my crossed hands roll, it was a disaster, but I did manage a couple of wrong hand rolls by accident. I am looking forward to working on my speed rolls; it was fun trying and spectacular when it all goes wrong!
Anyway I was exhausted yesterday afternoon, a very satisfied feeling.

Under the paddle roll

Rolling Stick, back to back