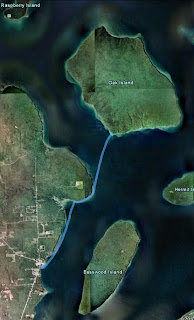 I woke up at 4:30am, thirty minutes before the alarm was set but I knew it was pointless trying to go back to sleep, so I rolled downstairs and packed the last few things into the car. My Explorer was already on the roof of the Volvo and so after munching down some cereal I headed to Ron’s house. Ron was still in his bath robe when I knocked on the door, so I sat listening to NPR while drinking some excellent coffee and playing with Ron’s GPS – they have come a long way since my eTrex.
We loaded Ron’s Q Kayak onto the roof and headed up Highway 100 and across to Taylors Falls. We stopped at a diner for a breakfast of eggs hash browns toast and coffee, then headed north east across Wisconsin, we took the path less travelled avoiding all the major highways seeing the small towns that have yet to be trashed by fast food and chain supermarkets.
We hit Washburn on the south shore of Superior around 11:30 and had a bowl of chili before heading along the coast to Bayfield. We located the park service center and got our camping permit and headed up the coast for another fifteen minutes to Buffalo Bay. The marina office was closed so we visited the casino and paid our parking and launching fees for the week. We were glad to escape from that smoke laden hell hole of flashing lights and buzzing slot machines.

Photo courtesy Ron Steinwall.
Buffalo bay is a tiny harbor combined with a small marina with around a dozen docks for mooring reasonably large sail or motor kayaks, there were only a couple afloat. The air temperature was around 50F and the wind was blowing from the north east about 10 Mph. The harbor provided complete shelter from the wind and the wave in the west channel. We unloaded the car and packed the kayaks, I mounted my video camera on the foredeck in anticipation of shooting some video on the way to Oak island. Ron had forgotten to get water so he filled up his containers by pumping/filtering some fresh Superior elixir. We dragged ourselves into dry suits slapped on some sunscreen and got afloat.
As we rounded the end of the harbor breakwater, our kayaks felt alive, lifted up by the first real waves, spray shooting out to the sides, the bow burying into the next wave in time for it to rise up again like a Disney roller coaster. With the wind on our quarter we paddled north along the west shore passing the wreck of the Fedora, now just a dozen ribs pointing skywards, the resting place for the local flock of sea gulls. We crossed Schooner bay and headed to the wreck of the Ottawa, an old Tug kayak wrecked in 1909. As we crossed the bay we started to encounter a lot of clapotis, caused by the Red Cliffs reflecting the waves driven against them by the stiff north easterly breeze. The Explorer felt at ease taking the waves in its stride and taking good care of me, its passenger and engine.

Rounding Red Cliff Point we headed out to the port hand navigation marker in the channel and then set course for the Oak Island campsite, our home for the night. The crossing grew calmer as we escaped the waves reflecting of the point and Hermit Island created a wind shadow easing the waves. The beach at Oak 1 is sand spit sticking out into the channel, we landed on the easterly side, and the waves were breaking onto the beach so we lined ourselves up with their path and paddled/surfed ashore. We both ended up with a good amount of water in our cockpits as we released our spray skirts to exit as waves broke over the stern.

The camp site at Oak 1 is beautifully situated tucked in amongst some trees just off the beach, room for a couple of tents, a fire pit, a bear box to protect your supplies and table/bench to sit and eat at.
I quickly learned that having a large duffle bag is a good idea for moving the plethora of dry bags from the kayak to camp, six trips later I was ready to pitch my tent, inflate my sleeping pad and get my bed ready for the evening.

Shelter first, then food – at least that’s what Bear Grylls always says. After making camp and hanging our damp dry suits and clothes up we prepared our dinners, mine was Jambalaya with a pack of tuna stirred in for extra protein, I treated myself to an appetizer of a tin of anchovies and finished the meal off with a nice cup of ginger tea. The world seemed a great place with a belly full of food and warm drinks.

We walked along the beach, looking at rocks, animal footprints and waiting for the sunset. As the sun set the temperature plunged, after taking a ton of pictures we retreated to camp and lit a blazing fire. Eventually I crawled into my sleeping bag and hunkered down for a cold night.