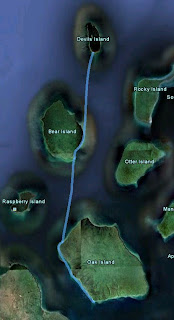 The previous night we had listened to the forecast and decided to rise early to make some progress in the calm of the morning, however the weather came early. We woke at 5am, still dark. Oaky to say I woke is an overstatement, I saw most hours during the night, it was frigid, in the low 20s and I was getting used to camping again, I did not wear enough clothes to bed, and I used a single chemical heat pad to try and stay warm – it was insufficient, more clothes and more heat would be in order for night two.
We awoke and I dressed quickly and warmly, brewed a cup of coffee and then we walked down to the beach. We could hear the waves and sure enough the water was not the calm lake that had been forecast. We returned to camp and listened to the NOAA forecast and learned that the wind would be changing direction and calming in the early afternoon.

Photo courtesy Ron Steinwall.
So we elected to sleep some more and aim to leave no later than 3pm in the afternoon, we figured this would allow us to reach Devils island with enough time to set up camp before dark if we averaged 3mph. I cooked some oatmeal, and then (wearing more clothes) went back to bed and slept until about 10:30. We cooked some noodles for lunch and then slowly broke down the camp and packed the kayaks.

We hit the water on schedule, small waves were breaking onto the beach making it fun to launch into their surf. The wind was blowing 15mph from the East but we were heading west so it pushed us along. We surfed around the sand spit and then found the lake calm and sheltered under the wind shadow of Oak Island. We made quick progress, passing the park ranger working at Oak 2, and pulled up onto the beach at Oak 4. The camp site is about 50 feet up from the beach and has lovely views out to Raspberry Island. We didn’t stop long, the lake was calming down and we headed north towards Bear Island. By the time we reached the south east peninsular the water was as calm as a mirror, just the remnants of a gentle swell making it rise and fall like a giant sleeping under a duvet.

Refueling was in order, we had done about 6 miles by then and had another 5 ahead of us, a snack of cheese smoked sausage and some olives were in order – a true delicacy. I cleaned out my skeg box – finding my blunt tipped knife perfect for the job, small pebbles from the beach had jammed it tight. We didn’t stop long, the sun was way past the zenith and we knew we were on the clock.

As we headed up the East coast of Bear Island we came the first natural arch, not exactly spectacular by the standards of Devils Island but it was fun to slip underneath it and feel the water surging around the rocks. As we left Bear behind us I saw how isolated Devils Island was, you really got the sense that you were a long way from the shore and it seemed like the island would never get closer as we paddled the hour the southern tip. The wind was picking up a bit 1 – 2 foot swells were rolling in from the north east but we made good progress and arrived at the harbor with plenty of daylight left.

We dragged our kayaks into the shelter of an old kayak shed left over from another era, the camp was way up on the cliffs and se we hauled our gear up and pitched camp quickly, this evening was colder than the previous day and we had little time to dry off and get food in us.

The camp was well equipped and perfect for our needs. The sunset that evening was spectacular; we sat on the dock and ate our supper, this time chicken curry for me, and drank tea as the sun set in front of us and the moon rose behind us.

During our launch this morning I managed to break the mount for my Flip video camera so I attempted a repair using some gorilla glue, it was extremely messy but functional and with an addition of a cable tie or two it worked fine for the rest of the trip.

We had a roaring fire going as the temperature dropped and we listened to the marine forecast to work out the plans for the next day. We were disappointed to learn that there was a small craft warning predicted for Thursday or Friday so we decided to adjust our plans.

Neither of us felt like sitting on an island being wind bound for two days, nor did we feel like doing battle with potential five feet waves unless we had to. We opted instead to paddle back to Basswood Island the next morning, having first explored the north coast caves. The decision made, we roasted our hands by the fire, ate some chocolate and went to bed, this time dressed much warmer and with two chemical heaters keeping me company. We set the alarm for 5am again.