I am going to assume that you are reading this because you already have decided to not use a Euro blade, and instead are going to use a Greenland paddle (GP) or Aleutian paddle, many of the Greenland style rolls can be completed using a Euro paddle but the Euro blade lacks many of the characteristics that make the GP a great rolling aid, so if you are going to use a Euro blade I wish you luck but I am not going to attempt to describe how rolling with this style paddle will work or feel as I do not have experience of trying it, apart from the basics of the screw, sweep and c-2-c roll.

There are three primary functions of the paddle during rolls; first is to create lift by moving through or over the water and then to use this lift as resistance to the righting forces applied to the kayak through the legs and hips, the standard roll is a great example of this function in action. The second function is the brace, which is when the paddle provides support due to its resistance to a downward pull of the paddle, this could arguably be due to the paddles buoyancy but the size and shape of blade and the water resistance this shapes causes to the blade moving downwards through the water seems to me to be far greater in magnitude than the buoyancy caused by its displacement. The C2C version of the storm roll is a classic example of this at work. The third function is simply the paddles buoyancy being used as support, the static brace is perhaps the simplest example of this, where the paddle is grasped by the paddler and used to support the paddler and kayak, the angel or butterfly roll is a more dynamic example of using the paddles buoyancy alone.
In all three of these functions the paddle’s dimensions will affect the benefit the paddle provides the roller. For the rolls where lift generation is the key a longer blade will create the greatest support as the same angular velocity will cause a faster water flow across the blade surface the further away from the center of rotation that the blades surface area moves. In addition to the length, the cross section shape of the blade will also affect lift, just as a plane’s wing cross section affects its ability to fly. There are many great books on hydrodynamics that will provide the best possible cross section for different water speeds and blade widths as this is used in yacht design to help improve racing performance. For rolls which rely on the paddles downward motion resistance it is the surface area of the blade as well as the blades length that will change the effectiveness of a paddles design, the wider and longer the better it will be – up to a point. For situations where you are simply relying on the paddles buoyancy it is a combination of size and material choice that will determine how much the paddle will support, the larger the paddle and the lower the density the greater the buoyancy.
It is not uncommon to see paddles in excess of 100 inches in length and as much as six inches wide in Greenland rolling competitions; these designs provide dramatically improved rolling performance but would be awful as a general paddle for everyday usage.
A friend of mine introduced me to the Aluet paddle design; this differs substantially from the Greenland design, it is not symmetrical, one side of the paddle blade has a rib running along it, this face appears to be the power face which faces the rear of the kayak during the forward stroke. Also the blade shape is more like a feather and the loom (the straight center section) is much longer than that of a GP. 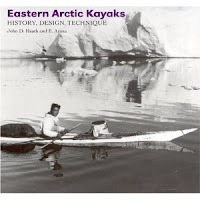 If you read books on the history and design of Greenland Paddles and kayaks you will come to understand that there is more art than science to paddle design and construction and a great deal is up to the individual paddler and builder.
One school of thought is that paddle length should be directly related to your arms reach, another states that length should be related to the width of the kayak as well as your reach, and another school of thought suggests that you need a paddle length based upon the angle of the paddle during your stroke, high and aggressive or low and relaxed.
Whichever paddle length religion you subscribe to you may decide you want a paddle just for rolling, especially while learning, in general longer and broader equals easier.
My current favorite paddle is an 86 inch long 3 inch wide carbon fiber GP with no shoulders, made by Ron Steinwall owner of Novorca Paddles.

What to wear when learning to roll.

Learning your first roll – Part one, the sculling brace.