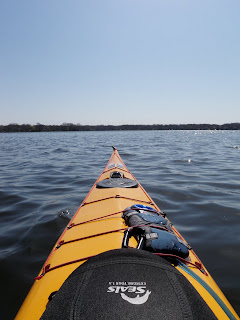 Ron S and I hit Spring Lake at 9am this morning, the air temp was still a crisp 40F and there was frost on the cabin roof as we pulled in. We had intended to go round the lake once, but Ron felt inspired to do it twice so we managed eight and a half miles before lunch, not a bad effort for so early in the season. I got to try out the new PFD which worked well, and also the deck mounted bladder for drinking. This afternoon I worked on a novel spray skirt mounting system for my GPS, more on that when I get my camera out again.
Spring lake was very peaceful, there was one fishing kayak out and a pontoon kayak was out laying the navigation markers to highlight the rock hazards at the west end. About a quarter of the docks were in the water now, but very few kayaks were afloat.
After our paddle we had a quick cup of coffee while basking in the sunshine on the deck. I cant wait to get the cabin opened up for the season.