This past Wednesday we had a two hour pool session at Olson Middle School in Bloomington, I used it as an opportunity to shoot an hour of underwater footage and then spent the rest of the time practicing offside rolls as well as a few harder forward finishing rolls. 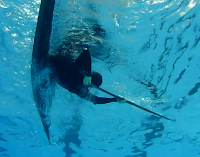 This shot shows me just starting the sweep of a behind the head roll, this is one of those rolls that looks a lot harder than it is, the paddle even when held behind the head is controlled mainly by the right hand which is able to carry out a large sweep and the paddle is tucked out of the way making the slide onto the back deck easy. 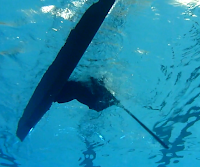 The spine roll had me fooled for quite sometime, when you watch videos of people doing the roll you tend to see them setup with the paddle straight up and down the spine, then as they recover magically the paddle is still there behind them. This shot of me halfway through the recovery shows the magic: you don’t keep the paddle parallel with your spine during the recovery you angle it away from the kayak allowing you to get onto the back deck while still getting some support from the paddle and preventing it from fouling the edge of the kayak.

When I started to learn the reverse sweep roll I applied so much pressure downwards with my hands, wrists, arms and shoulders I felt sure something was going to break. Now I have come to realize how gentle a roll it can be, I am able now to pause during the roll, use my core to right the kayak a lot more and rely on the paddle just for that last bit of resistance to rotate the kayak.

Fred generously covered the cost of the pool session, which was very nice of him. On top of that he bought cake and ice cream so that we could celebrate Fran’s birthday (21 again). We forget a cake server but Pete’s emergency rescue knife from his PFD served us admirably. Of course by the time I got home at gone 10pm I was wired on a sugar high which took a while to recover from.
The DVD project is coming along very well, I have a large collection of video content now to begin splicing together to tell the story – more to come….

A day off from the pool