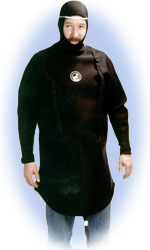 I started using a Brooks Tuilik about three years ago; they are the predominant Tuilik worn by the Greenland aficionado at the local paddling club (Inland Sea Kayakers). Brooks  is a family run business out of Vancouver, onthe west coast of Canada. The Tuilik comes in 15 standard sizes matching chest, waist, hip, height, and weight approximately for men and woman. The material isa 3mm nylon two sided neoprene, it has a very adjustable bungee around the base, one inch wide adjuster straps over the shoulder and Velcro to seal the wrists.
I was given a Reed Tuiliq by my parents as a gift two years ago, these are not as common in the US as the Brooks Tuilik. Reed is a small family run business in Devon in the west of England. Every Reed Tuiliq is made to measure; this starts with exactly fitting your kayaks cockpit, and moves all the way up your body to fit your head perfectly. A measurement guide is provided to allow you to be measured correctly, a vital part of purchasing the Reed Tuiliq. It is made from soft Aquatherm Fleece and uses a super stretchy material for the hood, cuffs and neck. 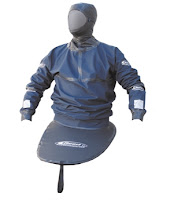 Both come in black, the Reed Tuiliq has reflective material on each wrist and a small logo on the spray skirt and shoulders. The Brooks Tuilik has a larger logo on the chest.
The two items feel very different when you wear them. The Brooks is bigger and baggier, and is considerably heavier, it also feels warmer. The Reed feels like it was made for you, a good custom fit, snuggly fitting head neck wrist and without excess fabric except in the long body tube to allow for easy rolling. The Brooks skirt is gently tapered and integrated into the body “tube”, the Reed skirt is just like a regular spray skirt sewn and the bottom of the body tube. The Brooks wrists are loose until sealed with the Velcro strap which allows for a lot of adjustment and sizes of individuals, the Reed’s are a snug custom fit – but only for you the one size. The Brooks hood is a good fit and slides back easily for conversation when you don’t want it up, the Reed hood is a much tighter fit and it takes some practice to pull it back off your face and down around your neck. They both tighten around the face with elastic cord with toggles on the end.
The Brooks being bigger gives me a lot of room the wear other things under it, for example I can wear a dry suit with the Brooks Tuilik but did not have my Reed one made sufficiently baggy to allow that. Because of the extra room in the Brooks it provides more buoyancy, this aids in some rolls and makes a static brace especially easy. But that said I have completed all my rolls in both garments.
Because the Reed is fitted so precisely to the cockpit it is only useable on kayaks with the same size cockpit outer rim. I have it fitted for my Tahe Greenland, and am unable to use it on my NDY Explorer. My Brooks works on all my kayaks, even the doubles with their huge cockpits. Similarly you wont be lending your Reed Tuiliq to friends, it fits you, it is unlikely to fit them as well. The Brooks is not custom fit and so fits a much broader range of shaped and sized people. With the Brooks Tuilik I am able to wear a PFD either under or over it, with the Reed it will only fit over it.
The Brooks Tuilik is worn with the hood pulled under the chin, The Reed Tuiliq is worn with over the chin. I minor detail but an important one to get a good seal around the face for rolling.
On a summer’s day the Reed Tuilik is cooler than the Brooks, the material does not seem to absorb as much heat. Either though allow you to roll or brace to cool down so this has never been a problem. In the winter I have worn the Reed Tuilik with thermal fleece underneath it and stayed lovely and warm too, albeit without a dry suit.
Both make rolling a breeze, although as I stated earlier, the Brooks does give you a bit more air to float with and can as a result make certain positions easier to maintain.
To sum up, I am glad I have both, if I only had one kayak I would definitely go for the better fit of the Reed, but if I had multiple cockpits to fit then Brooks is the only economic option. The reed feels like an advanced “cool” piece of paddle gear, the Brooks feels more traditional (just replace neoprene with seal skin..).
What do you think? I would love to hear from you.Jerry Borenstein posted a response to this review on the qajaqusa.org commercial forum which reminded me of another differentiating factor, when they get wet the surface fabric (nylon) of the Brooks seems to absorb/hold water and this results in some weight gain.

My mate Ander Thygesen recently sent me an email where he pointed out an omission from my post, and I agree wholeheartedly with him:

“Being a paddler and not only a roller, I want to point out that the brooks tuilik is a great multipurpose garment.  So, If you plan on doing other activities than rolling your kayak, I feel the brooks tuilik has some great advantages.  Here up north (Anders lives in Norway), the warm summer days are few, and the tuilik is a great insulating paddle jacket for touring. It keeps you very warm and dry in the winter, but also all the many rainy/windy/cloudy days that we paddle here in Norway. Also great for surfing and playing in big waves. When on land during breaks, the tuilik is great since it insulates well and covers most of your body against the wind.

And the best thing – I’m concerned about the junk pile we leave behind us – Seal skin is of course the best choice since it will rot some day. But if we cant’ use seal skin, I think the brooks tuilik is great. It is practically indestructible. The 3 mm. neoprene is really tough. I’ve used it for many years, and I have yet to see one being worn out. For touring, toughness is good. It doesn’t puncture easily, and even the lower part that fits the cockpit rim doesn’t seem to get worn. ”

I had overlooked the lifespan in my earlier assessment and I am included to agree with Anders the Brooks is certainly the most robust of the three and while mine has faded over time it still functions like it did on the first day it arrived.