First let me say I take no credit for this success, Dan Segal provided me the insights and guidance that led to the breakthroughs.
Dan pointed out to me that I was way too comfortable executing my storm roll, I was able to easily do it and as a result had become complacent, my form was off and I was getting away with numerous poor style areas just because my body knew how to get the kayak up. 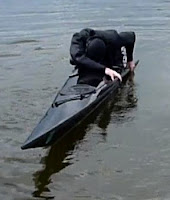 So back to basics, stretching, last week my nose was at least 8 inches off the deck and it took a lot of effort to pull it any closer. The forward finishing rolls require a very slow center of gravity as righting forces are a lot less than in extended paddle layback rolls. I spent the past week working to regain my stretch, three times a day stretching my hamstrings using exercises as simple as touching my toes while standing and sitting. I am now able to place my palms flat in the floor while standing and when sitting to get my nose and forehead onto my legs and nearly onto my shins. Yesterday when I got afloat for rolling practice I was able to touch the foredeck with my nose immediately and hold it there without effort (or pain). 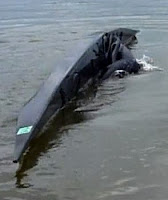 “Roll slow” was the next piece of advice, to not roll in with a big splash but to use the paddle to slow my entry into the water. This has too effects, probably the most important is that it decreases the sense of urgency to get set up and recover and slows the whole roll down, enabling me to really focus on body position and paddle angle. It the past I was deliberately rotating the paddle blade prior to rolling in so that there was little resistance, this weekend I learned to maximize the resistance of the paddle even moving it away from the hull a little to increase it’s resistance to the rotation to allow me to roll in without a huge splash. This was also helped by the forward tuck being much lower, no longer was a large bulk of my upper body sticking a considerable way off the deck but instead tucked forward pushed low on the foredeck. 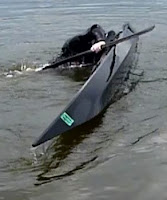 Head angle and position, if you have ever ridden a horse you know that it generally goes where you point is head, rolling is much the same if you point your head in the right direction your body (especially your spine) while obey. The storm roll has two spine phases the first is a concave phase during which you arch upwards to get your head to the surface, you are basically forcing your face up trying to get your chin to surface ( btw you also want to be looking towards the forward quarter at this point). The second phase is the convex phase, some people call this the chin to chest phase. The action of brining your chin to your chest causes you spine to curve the opposite direction which then causes the kayak to be pulled under your body and start the recovery roll.
Head out last, your head is a seriously heavy thing, and our survival instincts tell us to get it out of the water so we can breath. For successful forward finishing rolls the head needs to stay in the water a long time, and then not be pulled out but to come out naturally as a part of rotating your body onto the foredeck. This requires a conscious decision and thought, so having slowed the roll down enough you now have time to think through this nuance. 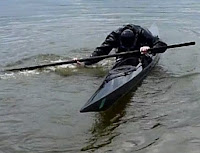 Recover as low as possible, keeping the head in longer forces your weight to remain low, keep this process going by literally dragging your nose across the foredeck as you recover attempting to keep your head and chest pressed low, again keeping the mass as low as possible and minimizing the resistance to rotation that your body can create.
After having practiced alL these points I was able to feel a considerable difference in the roll, much less blade was needed and I felt much more power from my body. I then focused on the paddle experimenting with putting blade sculling action in the roll, and attempting a forward sweeping low brace at the end like I had seen Maliqag do in the videos of his competition rolling. This worked well, in fact once I was able to scull myself up from a poorly executed finish with three sculls, something I had never tried before. I was also able to work on keeping the blade on the surface more. The other aspect of the blade I focused on was my off side hand, I noticed that in the videos the other rollers did not keep it on the deck but instead used the side of the hull, this allowed them to get the paddle up higher and more parallel to the waters surface, this seems to help with my aim of keeping the paddle afloat. I also modified my wrist throughout the roll, deliberately rotating it to get the blade to have lift in both directions as I sculled. Previously I was just keeping it flat for a more perpendicular paddle angle and just using the paddle as a lever.

After I had worked on the blade rolls I decided to work on my forward finishing norsaq rolls, Dan had told me I would find them much easier if I fixed these points above. I did. My forward forward norsaq and my reverse sweep norsaq roll both came to me instantly. My reverse sweep had been particularly elusive recently and now I can put that down to the exit portion of the roll, keeping the head in, low and rotating it forward not dragging it up and out is critical to my success. The forward forward similarly benefits from that low center of gravity. In both cases I slowed the roll down and thought about what to do underwater, I surprised me that I was able to slow down the execution of both and have greater success, previously I had just muscled my way through them with little thought.
So in closing I would like to express my thanks to Dan Segal for some great advice. Dan exhibits one of the delightful characteristic of many Greenland Paddling and Rolling enthusiasts that I have come across, the desire to pass on skills so they can survive the generations, cheers Dan.
For the paddle rolls I worked on I was using my new Root Beer Novorca Carbon Fiber 90 inch monster paddle, I had it made so I could feel the difference and see about producing a fast low angled paddle stroke. I will talk more about that in another post, needless to say, rolling with it is a breeze, and low angle paddling with it is a different experience than my 86.