Progress on Rolling with Sticks™

About eighteen months ago when I was looking for things to keep me occupied I created a concept for a single page kayak rolling tutorial. I started with the Throwing Stick Roll swept from Stern to Bow. I developed diagrams of the kayak from two different angles and in four different stages of the roll. I augmented the diagrams with written descriptions of each stage. I used a simple stick figure for the illustrations. This was the genesis for the Rolling with Sticks™ concept.
Mike Holgate from Poole Bay Canoes in the UK saw my first attempt and encouraged me to continue the initiative. Unfortunately work came along, and my summer plans for paddling and working on the book project work stopped under the pressure of starting a new gig.
This summer something sparked inside me. It was the idea of needing a story for my rolling DVD project. This then led me to understand the power of the content I was creating on my web site. I set myself the goal of finishing one roll description every working day of the week. The idea being 6-7 weeks later I would have all the rolls completed and be able to produce something of interest to the paddling community. While working on these roll diagrams and descriptions I noticed that every time I updated them people started viewing the web pages. And so was born the Roll of the Day series. Each week day I publish a brief, sometimes humorous, description of a roll and then link to the tutorial page with the diagrams, description and video.
This year four different G-Style DVDs are being, or have been, released. This put the kybosh on my idea for my rolling video. Until I see what is released I don’t want to focus on the video. I want to make sure my video editing efforts produce something that is differentiated and valuable as a supplement to what my fellow rolling video makers have produced already. There is no point in making yet another video that just does the same old same old. So what was I to do? So sprang forth the idea of producing Rolling with Sticks™ as a printed guide book to teach a progression of rolls. Taking it one step further I wanted to make it something that was used while actually paddling. I have a vision of the book being opened up and slid under the deck lines on a kayak. 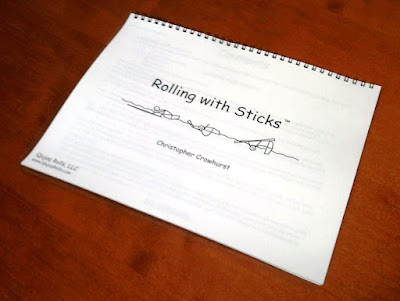 This past week I have been focused on establishing myself as a publisher. I incorporated an LLC under the name Qajaq Rolls. I submitted a trademark application for Rolling with Sticks™. I purchased an ISBN. Found the paper for the book. Last but not least I enlisted the help of my father and mother to proof read the content multiple times.
And now I am waiting in eager anticipation of seeing the first sample. It will be laser printed on water and tear resistant polyester paper. Spiral bound with a plastic binding. With clear vinyl covers front and back. I am taking the sample for some paddling in salt water over the next two weeks which should be a good test for the printing and materials.
I am working on getting quotes for printing in quantities that will make it economical to sell, as well as establishing an ecommerce platform and looking into shipping options.
I look forward to being able to launch the book within three to four weeks…

Roll of the day – Clenched fist roll, forward to back

Roll of the day – Rock roll, forward to back