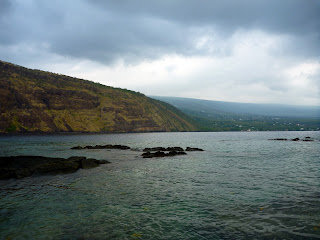 While on the Big Island we indulged ourselves with much hiking and paddling. We first approached the location of Captain Cook’s landing (and subsequent demise) on foot. It was a tough hike back, gaining 1300 feet in the matter of a couple of miles in a tropical downpour. The friable rock underfoot acted like roller bearings with each step, but the views when we reached the bay were breath taking. So too was the aquatic life.
A couple of days after hiking down to the monument we rented a tandem ‘yak  from Kona Boyz and paddled across Kealakekua Bay. 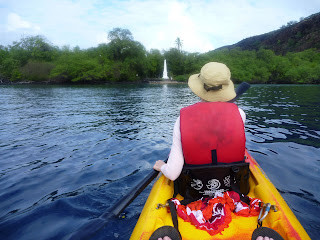 Note the rather attractive Greenland paddles. These were the multi-part Novorca Carbon fiber paddles that I have for exotic excursions such as this trip. We deliberately did this trip early in the morning. This is perhaps one of the most publicized places for snorkelling on the island and as such we had been warned how busy it gets. We arrived just before 8am and were perhaps the 5th kayak afloat. Crossing Kealakekua Bay we were were treated to an acrobatic display by spinner dolphins. This had the advantage that it captivated the other kayakers and allowed us to reach the bay and the reefs underwater well ahead of all the other visitors. We had roughly fifteen minutes of the place to ourselves. J snorkeled first and I acted as her rescue kayak, patrolling near her in case she felt the need for some rest. Then I dived in and got to experience what is rated as one of the top ten places in the world to snorkel. By the time we left, the place was over crowded with powerkayaks, kayaks, swimmers and a lot of tour operators yelling at each other. Early hour – golden hour. 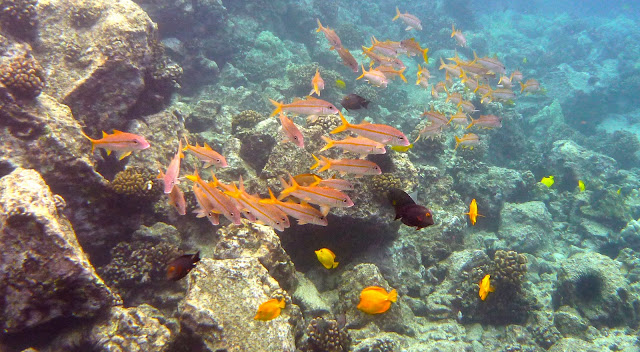 Passing it forward through Qajaq USA