Trying out a different style of paddling

This morning I got a chance to try out a Hawaiian outrigger canoe. I made a rookie mistake at first. I used the wrong face of the paddle for the power face. Like SUP the paddle blade bends forward allowing it to be vertical when the paddle shaft is at your hip creating maximum thrust. The canoe was surprisingly light for a beach rental. I took it out of the sheltered cove and played in the surf. The four foot waves were breaking over a shallow rock shelf. It was very strange to be in surf with only a single bladed paddle. Switching sides often was required to correct the effect of the waves. The outrigger definitely affected how the kayak turned. I had seen the locals using short swift strokes so I did my best to copy them. After a good solid soaking I retreated to the shelter of the cove again and enjoyed paddling with the fish and turtles. Much remains for me to learn about this sport. 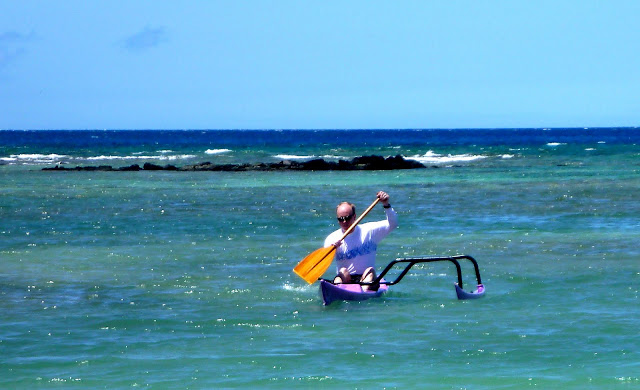 Roll of the day – Paddling upside down