Why was I smiling 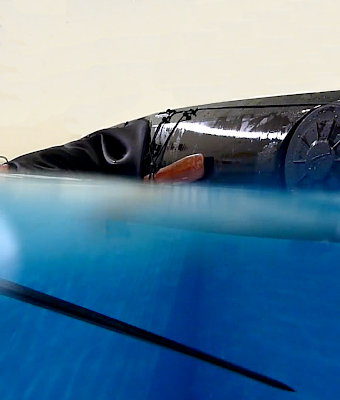 When I arrived at the pool last weekend someone mentioned that I was looking cheerful. Most winter Sunday mornings you will find me there practicing rolling. That is reason enough for me to be smiling.

Filming this session provided some interesting learning moments. The two foot long camera mount is too long. The force it is subjected to during rolling was too great for the joints, causing them to bend  despite being tightened. The camera I was using, the Panasonic Lumix, has a focal length of 4.9-22.8mm, this is equivalent to 28-128mm in 35mm lenses. The widest field of view is insufficient for capturing rolling. This picture shows the field of view when positioned two feet off the bow (vertically). My head is out of the picture, as is most of the kayak. I have asked Mrs. C. for a Hero2 HD Pro. This has a far greater field of vision and should allow me to take much better underwater video. Despite the challenges with the camera and mount I was able to learn a few new rolls. Watching a video of Warren Williamson from Washington,  I saw him practice a few interesting rolls. One was the back deck roll, originally taught to me by Alex Pax a couple of years ago. This is a forward finishing roll which allows you to roll up having fallen face first sideways with the paddle across your chest. Apparently this roll’s origin is in the white water paddling community. I found it a fun roll to work on. The only real complexity was what to do with the left end of the paddle. It is necessary to get the paddle up over the hull as the finishing move is much like the storm roll, a low brace. The second roll Warren inspired me to practice was a variation on both the hand roll and the butterfly roll. Simply put, you perform a hand roll while holding onto the paddle in your offside hand. The paddle actually helps the roll by acting as a counter balance assisting the kayak to right. The final roll of the day was inspired by Eiichi Ito of Japan, doing a static brace with the paddle held vertically rather than horizontally as is the norm. The challenge here being that the paddle provides extra weight, making the brace harder to control. I decided (with a little encouragement from Jeff) to modify this one step further and perform a hand roll with the paddle held vertically instead. It was awkward to hold the paddle, but in reality it helped the roll finish well.  As I moved the vertical paddle out on the offside it helped right the kayak.
This rather odd camera angle was a result of strapping the camera directly onto the underside of the paddle while performing a continuous roll, otherwise known as the under the paddle roll.After the holidays I will video these for posterity with what I hope will be a new camera. The sculling roll learning is continuing, with no success to report yet. I am slowly training my body to scull correctly, but I think my torso is not doing the right thing. I am tending to leave the kayak behind as I scull the rest of my body up. The greatest success I am having is with the paddle under the kayak, as this forces my chest against the foredeck throughout the roll.
Next weekend there are two pool sessions back to back, so four hours of training time. I can’t wait!

Inspiration of another sort