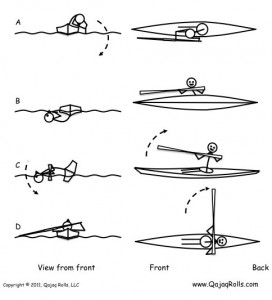 You may or may not know what caused the second edition of Rolling with Sticks to be developed. It was as a result of some really great feedback from Christopher Cunningham , the editor of Sea Kayaker Magazine, who proposed I redraw the kayak to look more like a Greenland kayak, and add opacity to the paddle and paddler so it was clearer where the paddler, paddle and kayak were in relation to each other. This rework produced, in my opinion, a far superior looking guide book. Well this week Christopher pointed out that the web site still had the old banana kayak images. So while sitting rather bored waiting for my girl to compete in an Ice Skating competition I updated every image on the web site to match the book – I hope this helps make them more useful. Let me know what you think. You can check them all out from the new roll page here.

An additional bit of feedback caused me to update the cross-hands roll to point out that while one can roll with hands crossed in either way (left over or left under) there is only one way that is correct in competition…. naturally I learned the [wrong] way first.

Caught in the act