Many people have sent me questions about how to video themselves rolling, so I thought I would share what I am currently using to mount and control my cameras. To record video I use two GoPro HD Hero2, usually statically mounted on the bow and stern. I also use a helmet mount at times.

GoPro makes a very robust suction cup mounting system. I have over a dozen kayaks so it is important to me that the cameras can move between kayaks. The GoPro mount comes set up with the correct mount for the camera, allowing easy adjustment. The suction cup is very strong. I do however add my own tether in case the cup fails.
You can purchase the suction mount from GoPro for $29.99

When not using a GoPro mount most systems need an adapter to convert from the GoPro attachment system to the standard 1/4 inch thread used on camera mounts. GoPro supply a small plastic mount that can be attached to the base of the camera for this purpose.
You can purchase the mount for $7.99 from GoPro

My second favorite mounting system is made by Kayalu Gear. I like their RAM suction cup mount and their ToughBar extensions. I use the 18 inch one. I find it adds a lot of drag when doing hand rolls and I worry how it would handle really tough surf. It comes with a tether so even if it fell off it should stay attached to the kayak.
You can purchase the ToughBar extension from Kayalu here for $44.95, and the RAM suction mount here for $39.95

For really rough conditions or when I want extra camera stability I use this Fat Gecko Dual Suction Mount from Delkin. This works well on the side of the hull when I want a wide boom to get some interesting angles. It also works well on curved decks as the whole base is articulated to take on many shapes and contours.
You can purchase the stand from Delkin Devices for $69.99

GoPro recently started shipping a wireless remote control system. I have one now that controls both my cameras. It comes in three parts. The first piece is the WiFI Bac Pac.

The BacPAc attaches to the rear of the camera. It contains its own battery so it doesn’t drain the main camera’s supply. On the rear of the BacPac is a small LCD screen showing battery status and the status of the network connection with the remote.

When the remote is fitted to the camera it no longer fits in the standard camera housing. An extended rear cover is supplied that allows the expansion unit to fit within the water tight housing.

The remote control is waterproof and comes with a handy wrist strap which easily fits over a thick wetsuit or tuilik. The remote has its own battery built into it, and so far it has lasted over four hours powered on.
You can purchase the remote and BacPac as a kit from GoPro here for $99.99 and additional camera BacPacs can be purchase here for $59.99

The standard GoPro waterproof housing comes with a curved glass lens. When the camera is underwater this lens causes the camera to lose focus and blur the picture. To compensate for this blurring GoPro now sells a dive housing. The large flat glass lens on the front now allows the picture to be clear underwater. It also allows decent pictures above the water. The dive housing appears to narrow the wide angle range slightly although I have not yet accurately measured its effect.
The Dive Housing costs $49.99 and can be purchased here.

The Surf kit from GoPro provides a number of stick-on mounts which work if you want the camera mounted close to the deck or helmet. It also comes with a float back housing which has a piece of foam glued onto the standard back. This back will not hold the WiFi BacPac. I use the float when I cannot tether the camera, on my helmet as an example.
Update the Floaty Back Door is now available separately from GoPro for $14.99 and can now be attached to any existing Back Door, this makes it much more useful allowing for its use with the WiFi BacPac.

All these accessories certainly increase the cost of the camera, but they do contribute considerably to the success and quality of the videos you can make using them.
If you have any questions about this equipment feel free to add comments below and I will do my best to answer them. 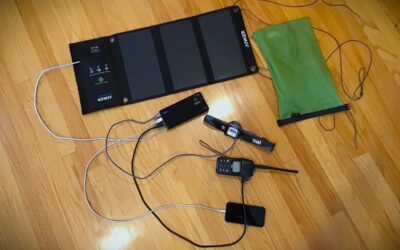