For the past few years I have been suspicious that I may have a shoulder problem. After intense paddling or rolling sessions I was developing a sharp pain between my right shoulder blade and my spine. Two weeks ago after a particularly intense weekend of rolling I finally convinced myself to go and seek help at the local sports medicine clinic. The initial examination involved numerous arm lifting, stretching and bending exercises while the doctor examined how my joints moved.
The good news from that exam was that I have no joint issue per se, thankfully no rotator cuff damage. Two possible diagnoses were suggested, one a trapped or pinched nerve in my neck and the second was scapular instability, basically an imbalance in the muscles around the shoulder blade. The proposed differential test was an MRI of my neck to look for potential nerve issues.
I have never had an MRI before. As an avid watcher of the now ended TV show House, I knew what to expect, but even so I was surprised by the MRI noise level and length of the test. Even with earplugs, the twenty minutes of scans left my ears ringing.
Unfortunately the scan was inconclusive, some mild bones spurs and some mild disc bulging, but nothing more than the doctor expected for a forty three year old neck. The next recommendation was to see a physical therapist and have them treat both potential issues.
The experience at Tria Orthopedics was excellent; the total visit took about four hours, without an appointment. This involved seeing the doctor twice and having the MRI. The facilities were very modern and clean and all the staff members were very pleasant and appeared competent. The only thing that nearly sent me over the edge was the woman in the waiting room who kept eating and munching in the most annoying noisy fashion. She was another patient, hardly Tria’s fault! 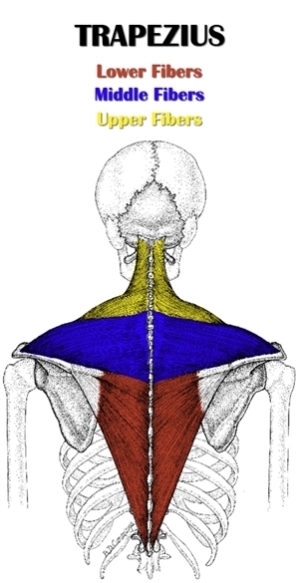 The physical therapy appointment was at a different facility and a couple of days later. Using the feedback from the MRI the PT had me perform a considerable number of exercises to find out what was going on with my neck and back. She identified four possible areas to work on; my upper and lower neck vertebrae are barely rotating with my head and as a result the middle vertebrae are hyper-rotating to compensate. This is one possible reason why the bone spurs are developing. The other area is my trapezoidal muscles. My middle traps, on my right side, are over developed compared to my lower traps. My lower traps are barely firing, and have become weakened as a result. Additionally my upper traps, in my neck, are considerably more developed on my left side than my right.
I have been given exercises instruction to work on engaging my right side lower trap. The PT taped my shoulder blade down across my back in an effort to show the muscles how to engage. Talk about uncomfortable. Maybe the discomfort is an indication of the tape working? I find the neck and back exercises tough, which is a good indication that they are needed. They are tough because my body is able to do the movements using the “Wrong” muscles and hence I have to really concentrate to use the “right” muscles that have been identified as the weak links.
When I think about my rolling being the cause, it is clear to me that I need to balance my practice more. I must work on my offside rolls to ensure a balance in muscular development. Coincidentally I had started focusing this offside regimen last weekend.
I hope the PT works, the next treatment option is steroid injections which I don’t like the sound of.