Newton’s laws of rolling – a meditation on floating

“If you don’t float you won’t roll” is an oversimplification, but it does highlight an aspect of rolling that is frequently underestimated by many rollers and learners alike.

1. “Corpus omne perseverare in statu suo quiescendi vel movendi uniformiter in directum, nisi quatenus a viribus impressis cogitur statum illum mutare.” Translated to English, this reads: Every body persists in its state of being at rest or of moving uniformly straight forward, except insofar as it is compelled to change its state by force impressed.

2. “Mutationem motus proportionalem esse vi motrici impressae, et fieri secundum lineam rectam qua vis illa imprimitur.” The alteration of motion is ever proportional to the motive force impressed and is made in the direction of the right line in which that force is impressed.

3. “Actioni contrariam semper et æqualem esse reactionem: sive corporum duorum actiones in se mutuo semper esse æquales et in partes contrarias dirigi.” To every action there is always an equal and opposite reaction: or the forces of two bodies on each other are always equal and are directed in opposite directions.

We generally use our legs, knees and lower torso to apply force to move the kayak. If this was the only force involved then all that would happen would be we would pull ourselves under the kayak and end up snug against the kayak which remains upside down. There are however two additional large forces to consider. The obvious is the huge force you can create using the paddle. If the paddle is moving across the water, then a force can be applied vertically to the paddle and it will remain on the surface due to the lift created by the blade moving across the water. This vertical force can be used to oppose the force of the knee, allowing the kayak to then move under the paddler as opposed to the paddler moving under the kayak. A lesser force, the one I am specifically interested in today, is the paddler’s buoyancy. Just like the paddle lift force, the paddler’s buoyancy can provide an additional vertical force against which to right the kayak. When learning the lay-back roll we are taught to get our shoulders flat, parallel to the waters surface. Being flat causes us to float the highest. If we rotate our shoulders to vertical, we will float with our head below the water. The static brace performed without a paddle is a great way to experience the effect that keeping one’s shoulders flat has on one’s ability to resist the kayak’s rotation forces simply with the knee pressure and body buoyancy. 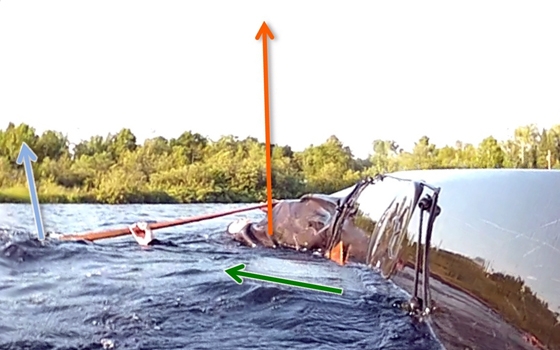 This weekend I drove my family back from a vacation hiking along the North Shores of Lake Superior in Minnesota. I find hiking to be one of the times when I can do a lot of thinking, as is long distance driving. During the many hours of hiking and driving I found myself meditating on the teachings of Cherri and Turner in their new DVD. I used some of their language and techniques at a rolling session last week. With one specific roller the concept of floating really resonated, as did the “if you don’t float, you won’t roll” language (they were learning a hand roll). It got me thinking how floating did not just apply to lay-back rolls, but is also critical for forward finishing rolls. Newton’s laws apply which ever way your face is pointing.

I found myself thinking about how to slow down my forward finishing hand roll by pausing for a moment to float. I began practicing this weekend using a norsaq to perform chest sculling motions. Over the course of 15 minutes I slowly reduced the amount of the blade I was using until I was chest sculling (and recovering) using just my hand. Of course I was not just using my hands, I was also using my upper body’s buoyancy. I then applied the body mechanics I had developed through the chest sculling to my forward forward hand roll. This worked instantly. And then after one aborted attempt I attempted the Assammik kingukkut —”using your hand, starting aft” the hand roll, sweep from stern to bow, finish tucked forward. It felt great to get this roll, and in a slow manner. Previously all my forward finishing hand rolls have been executed very fast, using a lot of arm and shoulder muscles. Now, by taking the time to allow my body to float, and using the force of the flotation to help provide resistance for my knee to right the kayak, I have been able to execute the rolls slowly and with a greater frequency of success. Plus I learned a new roll… 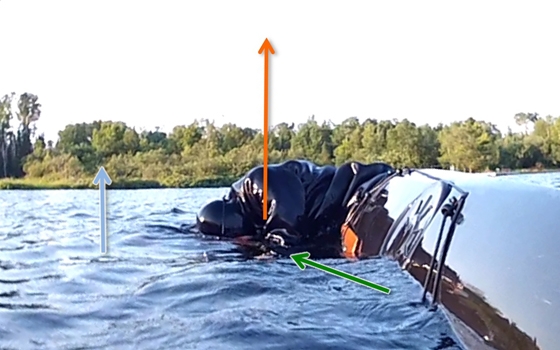 What a wonderful use of a very long drive down highway 35. My next plan is to get all four of my hand rolls to be smooth, slow and dependable. And then work on ways to help teach these skills. We have a forward finishing roll session scheduled next month with a lot of local paddlers coming. I want to make this an effective use of everyone’s time by finding ways to teach the body mechanics of the forward finish.

An evening of rolling