Knackered. That wasn’t the first word that came to my mind to describe how I felt at the end of the weekend. Austin Powers used a better word but it is probably not PG rated.

Saturday was the Inland Sea Kayakers Annual Picnic and Rodeo. I had not previously attended the event. This year I attended with my wife and my stepdaughter, Katelyn. When we arrived a party of paddlers (is that the correct group description?) had already taken off on a paddle around the lake, so we just lazily drifted across the lake and back again at our own pace. Once back at the beach Katelyn decided to goof around and practice her static brace, which she pulled off admirably.
Once the main group of paddlers had returned we gathered in the shelter for a kickoff. I had no idea what to expect from the Rodeo; I had vaguely heard it was fun and something that Fred had historically pulled together. Peggy, the club president, welcomed everyone to the picnic and then handed over to Fred to introduce the events. There were to be five separate competitions, as well as an overall competition aggregating the points for each event. 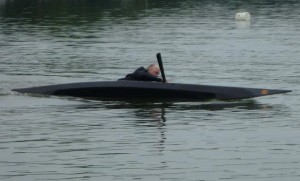 A gate was set up at one end of the course, and then about a dozen buoys were arranged in zig-zag fashion, stretching about 80 yards parallel to the beach. The event was against the clock. You started at the gate, wiggled your way along the course and then turned 180 degrees at the end and then wiggled back along the course and back through the gate.
I was paddling my Tahe Greenland and using an 86” Novorca carbon Greenland Paddle. I was the fourth paddler to attempt the course. I tried hard to keep my kayak as parallel to the course as possible, and not let the kayak get too wide. Edging the kayak aggressively around each buoy helped allow the kayak to turn while on the move. At the far end of the course I used steep edging and large sweep strokes to rotate the kayak through 180 degrees using alternating sides of the sweep like Maligiaq Padilla had taught us at Qajaq TC. 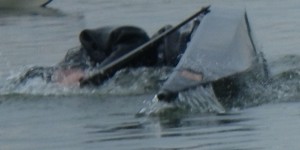 How many can you do in 15 seconds? That was the competition. The only rule was you had to compete in the same kayak for all events. Some people changed paddles. It was awesome to see how many people successfully rolled. I could not help but feel a sense of pride when several of the folks who have been to rolling sessions with me were able to pull off very clean rolls. A variety of techniques was used, some forward, some standard Greenland rolls, and some C-2-C spoon rolls. The continuous storm roll proved the most successful for me. I practiced earlier to see if I was faster using a norsaq but found the time transitioning from side to side slowed it down. I stopped too soon as I could not hear a thing so I probably had one more roll in me.

The sprint was a straight line from a buoy about 100 yards off the beach to the finish line literally 20 feet from the shore. We were paired up in the order we started the competition. I found it very hard to go fast; the stern of the Tahe sank low and the bow lifted high, shrinking my water line dramatically! 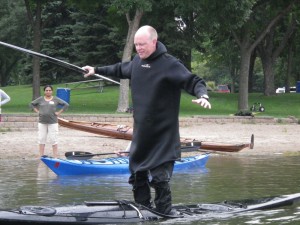 This event had a very strange Hawaiian sounding name that it derived from the dance we were supposed to do once standing. The duration of the standing was timed, and the “style” of the dancing was awarded points.
I was able to stand for a long time, but the moment I attempted the dance in my dry suit and tuilik I was heading for the bottom of the lake. Many people had someone steady the kayak to enable them to standup. Balancing is something that takes practice and I have found the regular use of a balance stool my father made me has dramatically built my confidence and ability to stay loose at the hips and stay upright. Another secret weapon I have is I spend all my workdays sitting on a balance ball rather than an office chair. (Postscript it was the Watusi dance, nothing to do with Hawaii.)

The final event was another time trial. We raced against the clock around buoys laid out like a baseball diamond. We started at home plate, raced to the center (the pitcher’s mound), turned right and went to first base, then crossed the diamond to third base. We then performed a quick 180-degree turn then raced back to the pitcher’s mound, turned left and then rounded second base before heading back to home plate and the finish line. After my poor showing in the sprint I did not expect to do well in this event. It was a staggered start so I had someone to chase which helped me keep fighting. 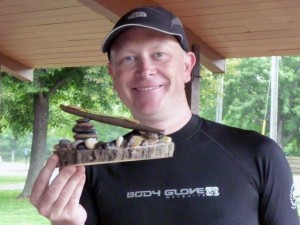 After the event we had a prize giving. The prizes included some camping/kayak goodies, and a hand made trophy, which was fashioned by Mike and Lynette from a slice of a tree branch with local stones and a wooden replica of a kayak mounted on top. It was my honor to win the overall prize so it is sitting in our living room, ready to be handed to next year’s winner. The event was well attended by both competitors as well as spectators. Fred and his team of Rodeo Wranglers did an amazing job of organizing and running the event and Lynette and team did a great job of catering. Special thanks to Jeff the Grill Meister. I can’t wait to go again and next time I want Katelyn to compete in all the events.