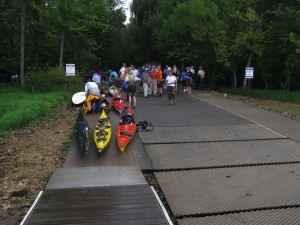 On Sunday the Make–a-wish foundation ran a fund raising event on the St. Croix River, starting at Still Water and ending at Bayport. 20+ competitors attempted to swim the 3.5 miles down the river. I had been asked to recruit kayakers to act as the spotters to make sure the swimmers did not get into trouble. In all we had 14 kayakers and one SUP paddler show up. Without everyone’s help the event would not have gone off without incident.
Swimming 3.5 miles is no small achievement. With hindsight, it was apparent that several of the swimmers should should not have entered to race 3.5 miles, as they had no intention of completing the event. There was a small group of elite athletes that stormed down river and completed the race in magnificent style. The remaining few struggled along and most made it. 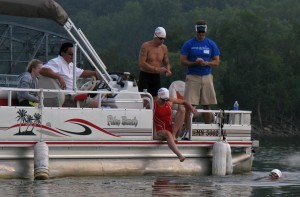 There were many things that could be learned to make the event better in the future. Perhaps the first is that there needs to be an alternative event if people only want to do a short distance. We ended up using 5 kayakers for a long period of time to babysit a group of people who were pulled out at the first mile marker. Some required towing to get that far. They stated they had no intention of completing the event. By the time they were pulled out, the lead swimmers were nearing the end.
The ratio of powerkayaks to kayaks needs to take into account the spread distance between the leading and trailing kayak (swimmer). Once the kayaks were spread across 2.5 miles the distance between kayaks and the nearest powerkayaks was too great for a timely response. Perhaps requiring a maximum time for each mile should be a requirement to help minimize the spread between swimmers and hence their safety team. 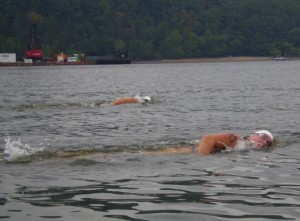 There was at least one swimmer who put them self at risk by ignoring requests from the kayakers, lifeguards and the sheriff to leave the water and board a powerkayak. Their own stubbornness made them push them self to a point where they were unable to finish the race and they ended up being towed the last few hundred yards by a volunteer kayaker. Clear rules should be established about carrying on. Swimmers who needs support from a kayaker should be pulled out onto a kayak and not continue further, in my opinion.
A similar issue arose concerning hydration and food. There was no provision for either to be carried by any vessel to assist the swimmers. Some of the less fit/prepared swimmers required sustenance to complete the race. There should be clear rules surrounding food and drink and provision made appropriately. Either it should be deemed acceptable (and supplies on powerkayaks), or it should be cause to pull the swimmer out if they require outside sustenance to continue.

Despite these challenges the event was successful, much money was raised, and no one was injured or drowned. Many paddlers had a glorious time drifting down the river taking care of the swimmers. I will be working with the event organizers to ensure all the learning from this years event’s are applied to ensure the event continues to run without major incidents in the future.

In a subsequent conversation with one of the kayakers they also suggested that when paddling in support of an individual it was very helpful to know upfront information such as which side they breath on, and where they like the kayaker positioned (parallel or in-front).