I was a Qajaq Training Camp virgin this year so knew little of what to expect. Located in the North west of Michigan, it took a little over thirteen hours to get there. The first six hours were spent driving to Milwaukee, accompanied by Tim, another resident of Minnesota, who rode along as my travelling companion. After a great lunch at an organic café we took the high-speed ferry across Lake Michigan. Finally we drove two hours north along the lakeshore to reach the training camp.
Camp Lookout is situated beyond the end of the road, literally. You arrive at a wooded parking lot. We knew we were in the right place due to the dozen or more vehicles with kayak racks and trailers strewn amongst the trees. 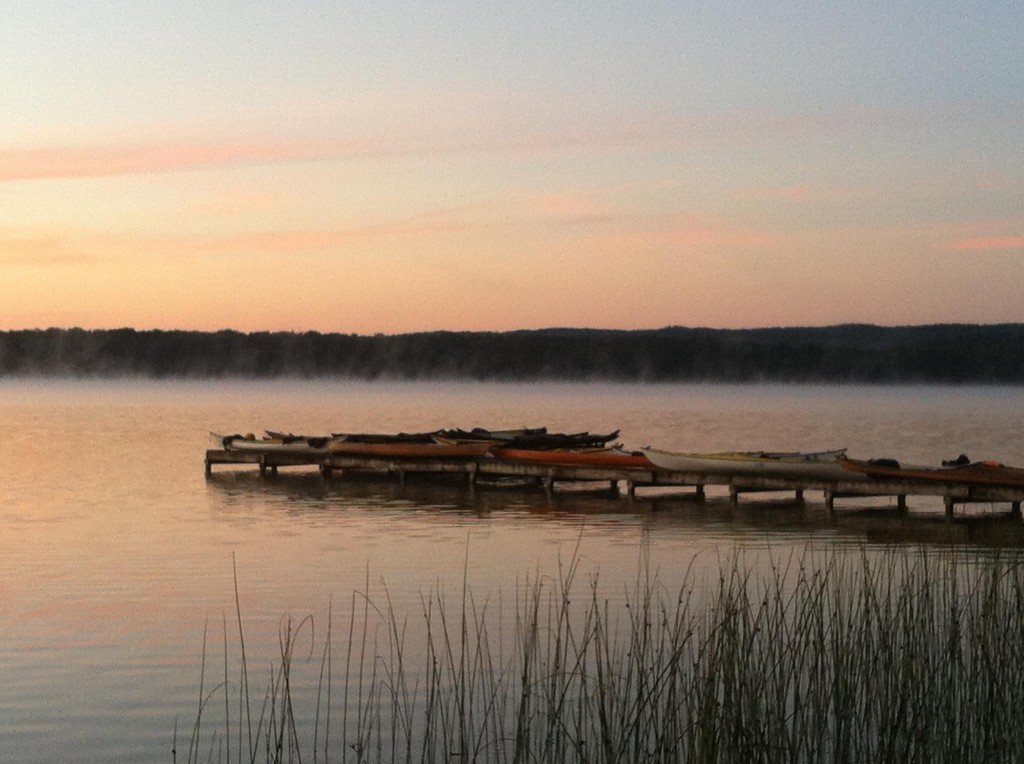 As we pulled up I saw the familiar face of Chris from Boreal Shores paddling off in a beautiful TideRace Xtreme, propelled by a shiny Novorca carbon Greenland paddle.
We unloaded our gear onto the dock along with all the other gear waiting for the pontoon kayak to transport it to camp, then pulled on our dry suits for the short paddle along the lakeshore to Camp Lookout.
We had driven hard, knowing that the scheduled dinnertime was around 6pm. As we paddled closer to the camp we could hear the sound of sixty excited paddlers reacquainting themselves with old friends and greeting new ones. We made it ashore minutes before the dinner bell was rung.
Throughout the weekend Michael and his merry band of helpers fed us. They provided magnificent food, which tasted great, and was plentiful. The food was far better than I had expected or ever experienced at “camp”.
We were each assigned to a cabin; mine had seven bunks in it (plus a resident mouse). There ended up only being three of us staying in the cabin, Tim and Don were my cabin-mates for the weekend.
About a third of the attendees were new, I was the only virgin mentor. Without exception I enjoyed every conversation I had with every attendee. It is rare to be surrounded by such good, caring, interesting people each with a story to share and something to teach.
The mentors were easy to identify, we were all given red bandanas to wear. We could usually be found up to our waists in the warm ,clear, blue water off the docks. The location is ideal for rolling teaching, the gently shelving lake bottom providing ample area to stand along side someone while they learn to roll. 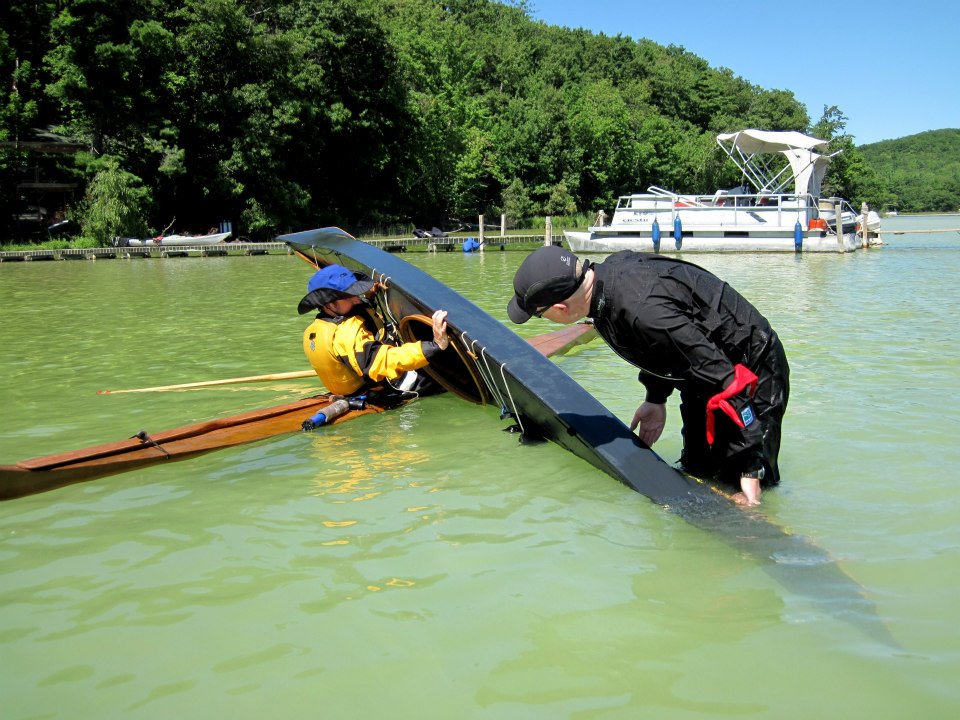 Even though I came to mentor I was still able to learn a great deal. As usual I learned a fair amount about how to teach. Especially how to help people overcome their own lack of flexibility and still be successful as a roller, either layback recovery or forward finishing recovery. Alex and John were able to help me get my forward sculling roll with paddle on the foredeck a few times. Now that I have felt the correct motion I am sure that with a little more practice I will be getting it consistently.
Along with much rolling mentoring, I helped demonstrate Skin-on-frame kayak rescues including X rescues and seal rescues, a rare chance to help people understand how much harder skin kayaks can be to recover and re-enter. 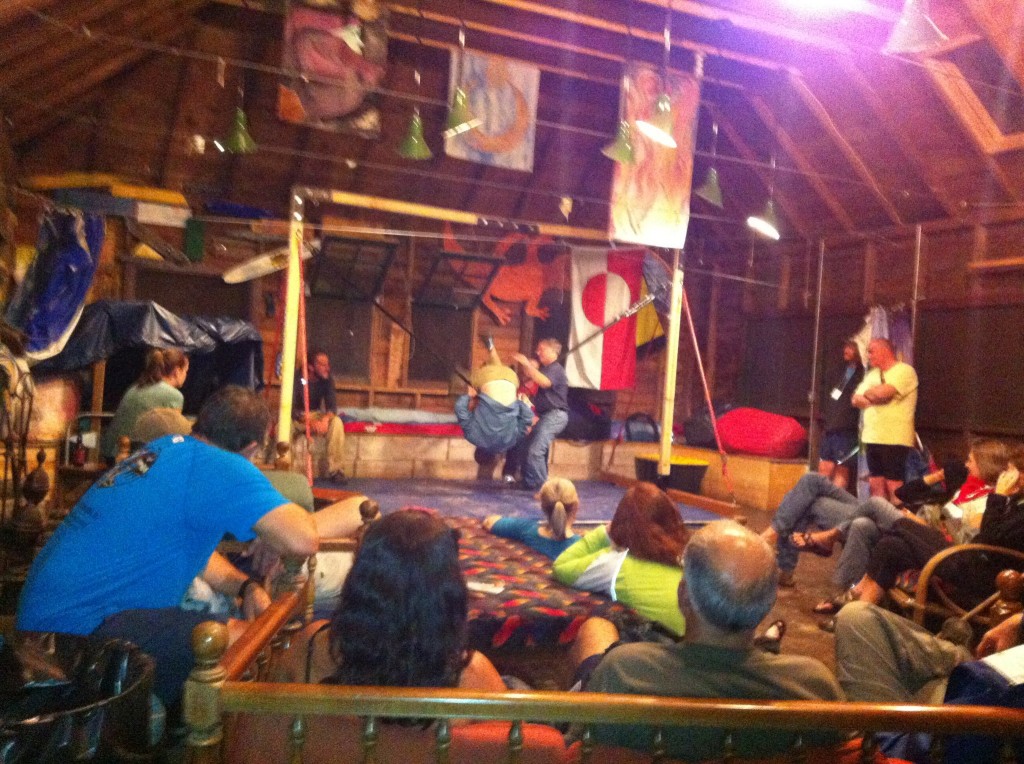 During the evenings camp activities were very varied, with Greenlandic Rope demonstrations and a chance to play if you felt so inclined. On Saturday night there was a fund raising auction (live and silent). Every night there was a campfire with live music provided by the many talented paddler/musicians.
The event was very relaxed, and whilst there was organization (provided admirably by Nancy and Sharon) it was more to provide guidance to those of us that had never attended previously than to set a rigid structure. Qajaq skinning, paddle making, surfing, rolling, strokes; there was something for everyone.
The venue, the weather, the location and of course the people made this a very special event. I hope I get the chance to go again.

Thanks to Sharon for taking the pictures. I was too busy to get any afloat!