Saturday morning started early. I woke up at 4am and my mind refused to let more sleep be an option. So I pulled out my laptop and set to work adding Spanish translations to the 25 Rolling with Sticks rolls to this website. If you go to a roll, try the Standard Greenland Roll for example, you will now see a link to español just under the title, this link will scroll the page down to the newly inserted Spanish instructions. There are still a dozen rolls without translations, I will have to see if I can twist Iván’s arm to translate the others.
After the rest of our house woke up and breakfast was consumed, I loaded the Tahe onto the Volvo and filled the trunk with dry-suits, tuiliks and avataqs. Snow was falling lightly, thankfully the snow wasn’t settling. The air temperature was in the upper 30F, just above freezing. There was a light, 10mph, northerly breeze blowing.
By the time I arrived at our cabin on Spring Lake the weather was looking thoroughly gloomy, dark clouds, snow, the wind was kicking up small waves breaking on the beach. In reality these were great conditions to practice rolling in preparation for Lake Superior. 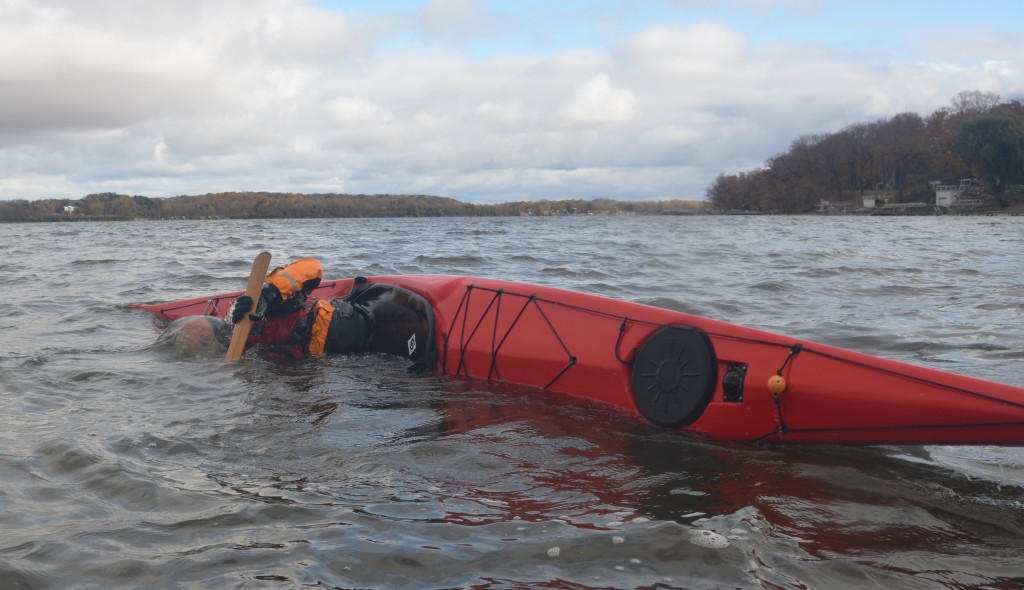 My companions for the mornings rolling sessions had reduced to just one, Aaron, most people had dropped like flies once the forecast started predicting cold windy weather. Aaron hasn’t yet found a dry-suit, he is actively engaged in bidding on them on eBay, but without one I felt his time in the water would be too limited, so we agreed he would wear my Kōkatat Expedition.
I donned my Reed one-piece fleece suit, pulled on my Kōkatat g’fer, slid into my Reed tuilik and finally put on some NRS Rouge gloves. Aaron was able to squeeze into the Kōkatat Expedition and we headed out onto the lake.
Aaron recently made tremendous progress with his rolling, slowing it down and decreasing the need to heave down on the paddle to right the kayak. His first roll caused a quick return of old habits. The paddle never surfaced the angle caused it to plunge downwards and the cold water resulted in Aaron bailing out into a quick wet-exit. T- Rescues then became the order of the day and we had the opportunity to practice them a number of times. But soon Aaron became accustomed to the water temperature (43.2F) and relaxed. With focused effort Aaron began to roll gracefully again, and was soon able to recover from blown rolls without wet-exiting. 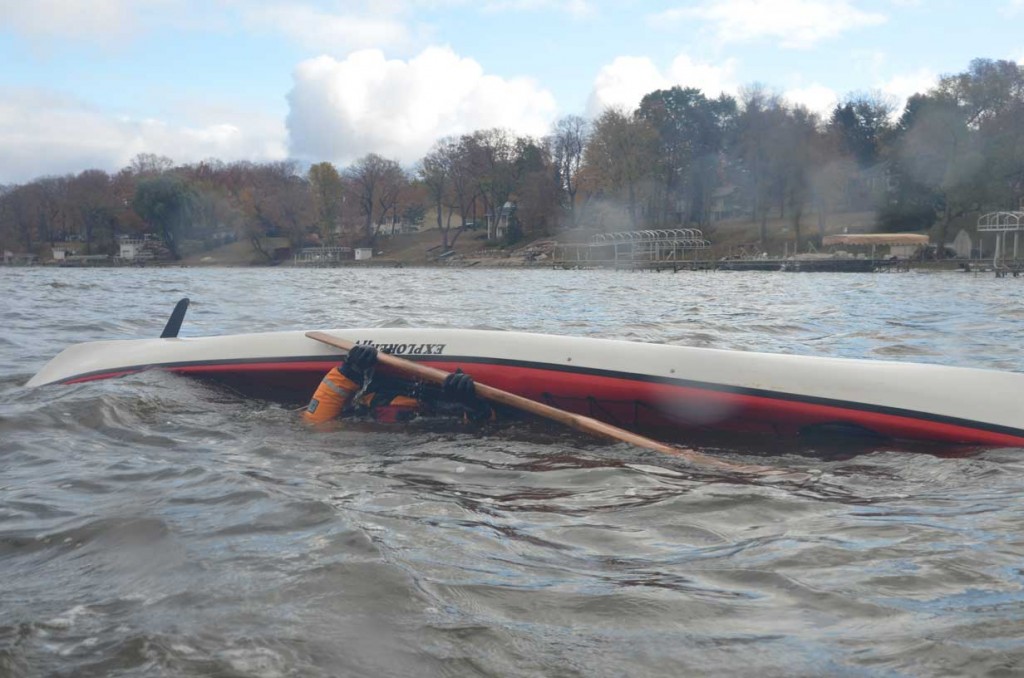 Once confident in his standard roll we moved onto the Shotgun Roll. I learned how to maintain my kayak position near his bow and simply hold onto the bow toggle during his roll. If needed I could then flick the kayak up in a sort of bow based hand of God rescue. Aaron knows how to lay back which meant despite his size I was able to twist the bow sufficiently to get him upright. The Shotgun Roll came quickly (and well) for Aaron, with only one blown roll out of a dozen or so performed.
We took occasional breaks from rolling to paddle about to keep our bodies moving, brain freeze was affecting Aaron a little and so he put in ear plugs. I had pulled my Reed tuilik good and tight and I got no water in my ears throughout the whole session. With the gloves HydroCuff pulled over the tuilik (and dry-suit) no water was entering anywhere and I was toasty (apart from my exposed cheeks and nose). 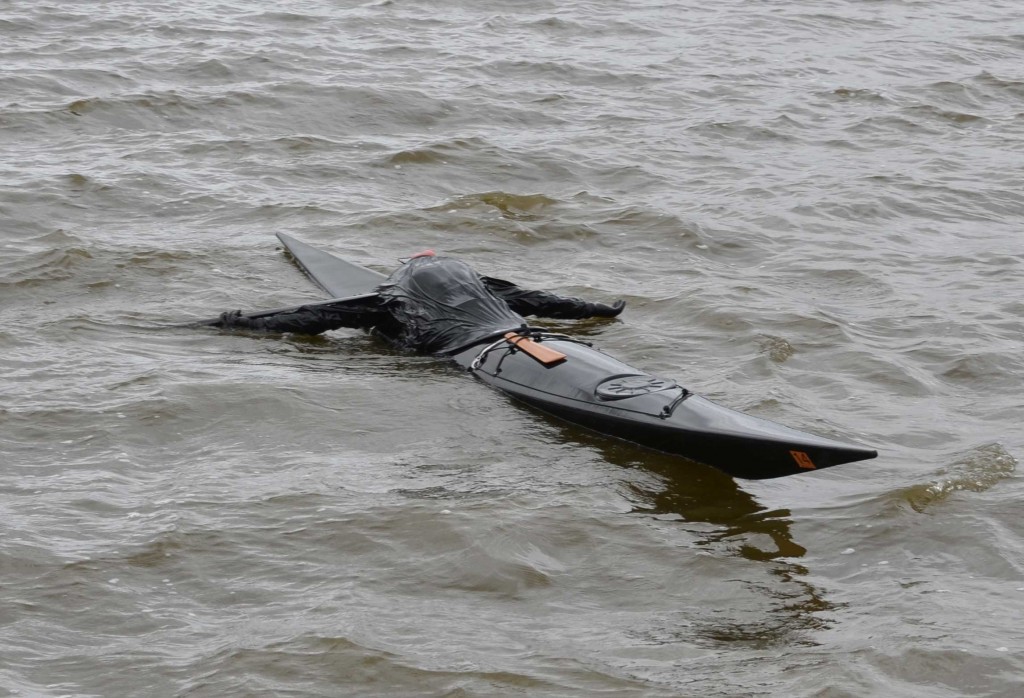 After the triumph of the Shotgun Roll we moved onto Butterfly Roll practice. I demonstrated a few and then Aaron instantly did one! After 90 minutes of practicing Aaron was beginning to get tired. The final roll he started ended abruptly when he was unable to get under the kayak. The dry suit needed to be burped. For some reason air had entered and he was floating like the Michelin man. We decided to call it a day and Aaron dragged his kayak ashore.
I spent a few minutes running through my rolls. I had the pleasure of using my new Novorca Razor 3-part paddle. I was able to get the forward starting forward finishing hand roll on my first attempt which was very pleasing given I was bundled up and rolling in chilly water. I also worked on all four reverse sweep rolls and was successful. 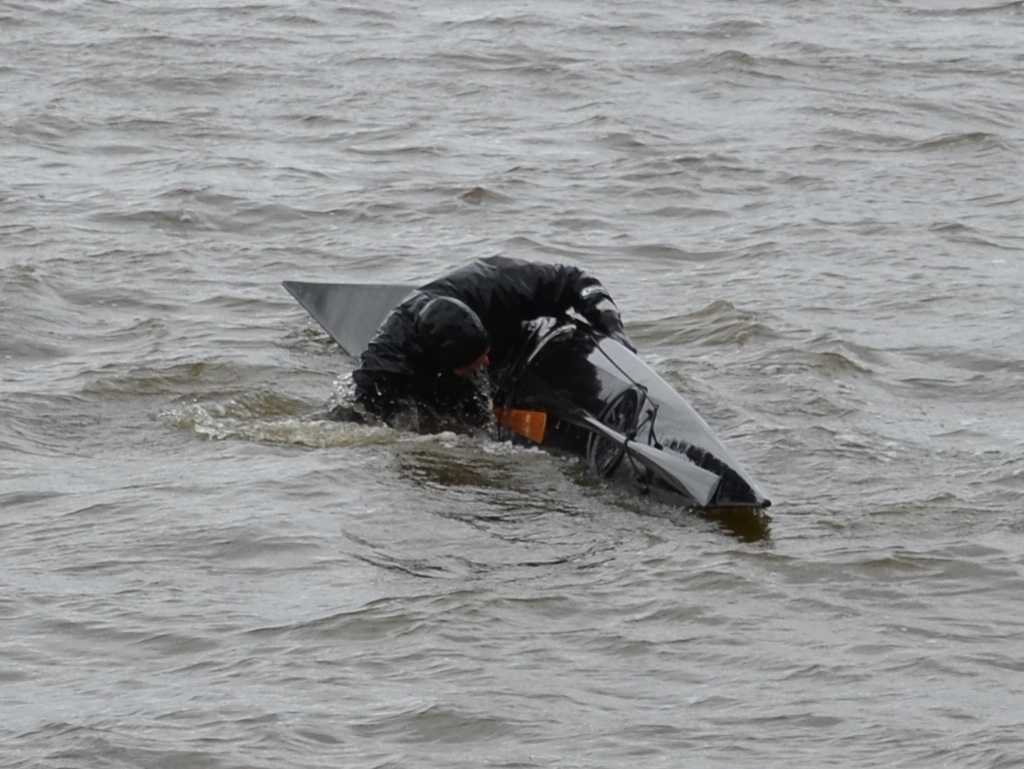 I spent the afternoon working on two projects. First I reorganized the Qajaq Rolls LLC office and optimized the packing area to help with now fulfilling books in two languages. I fulfill the book and DVD orders early every morning before heading off to my day job, so making it a simple and efficient process is important. My second project was to continue work on the Kraken, the folding Yost designed sea kayak my Father and I are constructing – more on that later.
No one ever said working couldn’t be fun.

The Spanish are coming