Being an ex-pat with a blended family certainly can complicate family gatherings. This past weekend family members travelled from three different US cities to spend a weekend together at the seaside in Florida. There was barely enough moonlight to see the palm trees when the Minnesota contingent arrived at 2.a.m. We did however get to hear the crash of the waves on the beach before turning in for the night.

We had rented a large condo on the Atlantic coast. The view was spectacular, uninterrupted white sand beach stretching as far as the eye could see. Blue ocean water, schools of dolphins were eating their way along the shoreline.

Our kayak fleet recently expanded to include a Nordkapp RM. My father found the kayak being sold by an outfitter who was disposing of their fleet of sea kayaks in favor of SUPs and other flavors of watercraft. The RM signifies that the hull’s construction material is roto-molded polyethylene, perfect for bouncing off rocks and being dragged up beaches. 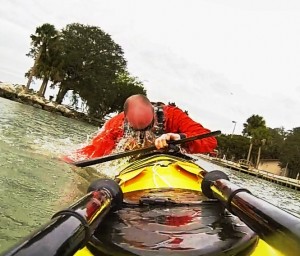 This was my first chance to try her out. Naturally as soon as we got afloat I tested how the Nordkapp bracing and rolling felt. Being alone in unfamiliar salt water I was wearing a PFD loaded with safety equipment (VHF radio, flares, PLB etc.). Even with the PFD and equipment the kayak rolled beautifully. Layback rolls were smooth. The back band and deck height worked well. I did not experience any of the sharp pain that some other larger kayaks have caused me in the past. Forward finishing rolls were very positive. My thighs fit snugly under the side decks by the keyhole cockpit which allowed me to get low on the foredeck. The primary stability was considerably softer than my NDK Explorer, yet firmer than the Tahe Greenland. The point where secondary stability occurred for me was at a considerable angle of heel, with the edge of the cockpit underwater. I noticed while paddling aggressively the bows rode up on the bow wave, I suspect that when loaded with camping gear I will be able to push her along harder with the longer water line. Underway there was an interesting chuckling noise from the bow with each stroke, possibly due to the wider stem caused by the construction method. The hull design allowed for easy turning as well as sideways motion with draw strokes, without seeming to compromise the straight line tracking. I am looking forward to getting her afloat on Lake Superior in the Spring.

My mother taught me to cook when I was a child. This weekend we got to sample a creation she has been working on. Her own version of a cereal bar. They are excellent paddling food: 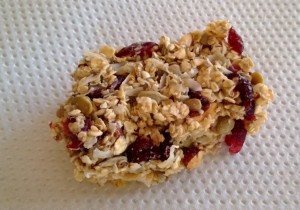 Warm condensed milk in a large pan until runny. Add all the rest of the ingredients and stir well. If there is still condensed milk that hasn’t been absorbed add a little more oats.
Put into a buttered or lined baking tin. Press down firmly.
Bake for 1 hour. Take out of oven and cool on rack for 10 mins then cut into bars. Leave to cool completely in the tin. Transfer to air tight containers.

These make an excellent breakfast, or paddling snack.

Other than enjoying the water and company of family we also ventured to St Augustine. An historic Spanish town which despite being filled with gift shops has still managed to maintain some of its original charm, despite the fact that they still fire their canons at the British.

On our way back to Minnesota we experienced a 92 degrees temperature swing, going from 82F and bright sunshine at Orlando to a bone chilling -10F wind chill at Minneapolis airport.

I will be rolling in the pool this weekend – It is time to prepare for the rolling demos at Canoecopia.