VIPaddles is run by Randy Millar in British Columbia. Last month he contacted me and asked if I was interested in reviewing one of his Greenland paddles. I of course replied favorably as I love to try out every and any skinny stick I can get my hands on. I had heard of Randy’s paddles previously. Christopher Scully used one when he placed second in the 2011 rolling competition at Greenland Week in Washington State.

Randy makes solid and laminated paddles, I believe he also makes two part paddles using a carbon joint system to break them down. After a brief email exchange the dimensions of the test paddle were agreed. I prefer shoulder-less paddles but to quote Randy ‘I don’t make shoulder-less or hard shouldered paddles as I consider the shoulder that I carve as my “mark” in paddle making’.

If you read through Randy’s website you will learn that the wood he chooses does not come from a big box store. One of Randy’s claims is that he knows within 200 meters where the wood that makes every paddle came from. He uses old growth cedar from a local sustainably harvested forest. Randy works closely with the feller/sawyer who harvests the wood, which they custom cut in the bush just meters from where the tree was felled. The choice wood is then selected according to color and grain direction. Randy then naturally dries the timber before carving the VIPaddle.

Kayaking can quickly become an expensive activity. My collection of paddles probably cost over five thousand dollars. Some of the more complex multipart custom carbon paddles can cost upwards of $500. The latest Lumpy Paddle I reviewed is listed on Bill’s website at $175. Randy lists his paddles at $150. So they are similarly priced and certainly considered at the lower end of paddle costs. 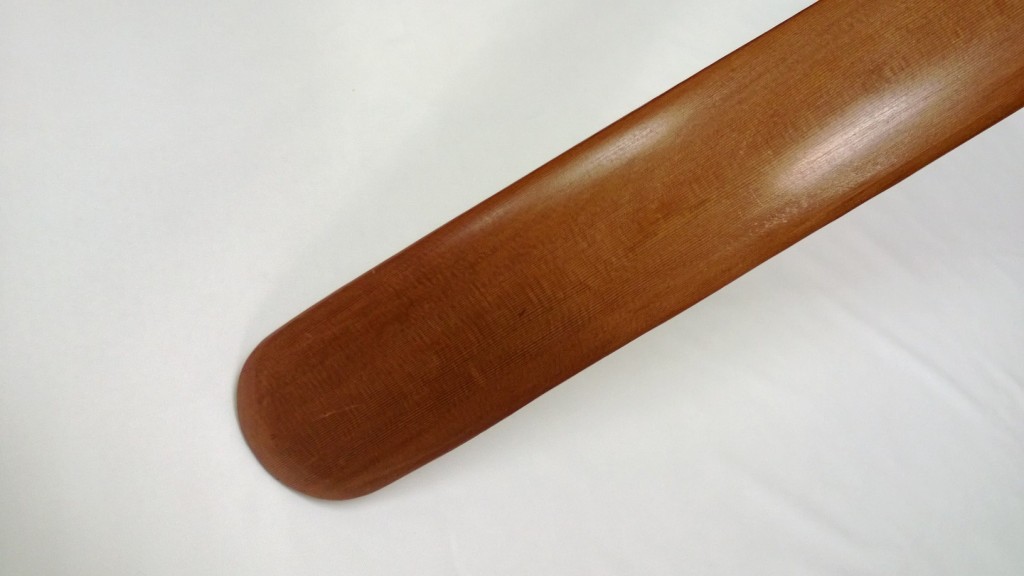 When I received the VIPaddle it came wrapped in heavy duty bubble wrap. All paddles I had previously received from paddle makers had come shipped in rigid plastic or cardboard tubes to protect them. After peeling off the bubble wrap it was apparent that during shipping the paddle had been placed under numerous other packages, some of which had indented the soft cedar. The damage appeared minor and cosmetic only. Since discussing this with Randy he has sourced a telescoping cardboard tube which should better protect the paddle. 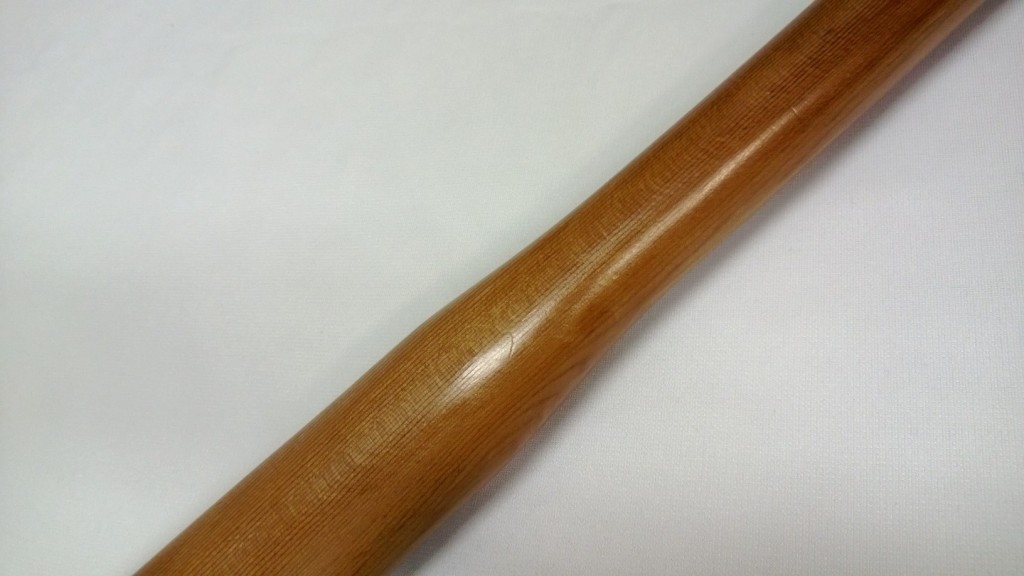 I had specified the length and width of the paddle and loom. Randy made the other design decisions. The shape of the blade and shoulders are his design. The blade is very flat, approximately half an inch thick at the tip, and remains flat for the first 8 inches of the blades. During the next 16 inches the blade gradually increases in thickness. In the final 7 inches before the shoulders it rises rapidly to meet the loom diameter. The shoulders are indeed soft. What this means is that the lateral distance along the paddle during which the paddle transitions from the loom profile to the blade profile is longer than in a hard shouldered paddle. In this paddle the transition takes two inches. Each style of shoulder has a characteristic feel. The inner blade profile also has considerable effect on how a paddle feels in use. The fingers generally are placed diagonally across the blade and so its profile affects the angle at which the blade is held. As I mentioned earlier I am a fan of shoulder-less paddle as I like the ease with which I can slide the paddle between hands. I also paddle with a canted stroke. The VIPaddle’s soft shoulders offered little resistance to sliding, which, for me, is a plus. The profile of the blade where my hands fell did not create an automatic cant, so I found it necessary to bend my lower wrist slightly to produce a cant. This is easily solved by creating a slight diamond shape in the blade profile where the hands rest.

When picking up a wooden paddle it is hard not to consider its aesthetic appeal. My recent review of the Lumpy paddle certainly raised the bar on paddle finish. The VIPaddle had a few tooling marks that were visible if the light caught them just right. Some of the marks may have occurred during transit. The VIPaddle was finished with Tung oil and then a thin coat of spar varnish that combined to give the paddle a pleasant sheen.

Still being winter here in Minnesota, my only option was to try the paddle in a swimming pool. Randy makes it clear on his website that he makes light paddles designed to decrease the impact on the paddler; a touring paddle is how he positions them. In a pool it is hard to assess the paddle for touring. Most of the time in the pool is spent performing turns, rescues and rolls, with very little straight line touring. My initial few strokes highlighted how flexible the paddle was. I could immediately feel the give in the catch as the wood flexed to absorb the load of my forward stroke during acceleration. I performed a few sweep turns and stern and bow rudder turns. Again during the reverse sweep turn in particular, the paddle’s flex was apparent as my weight was transferred from the blade to the water. 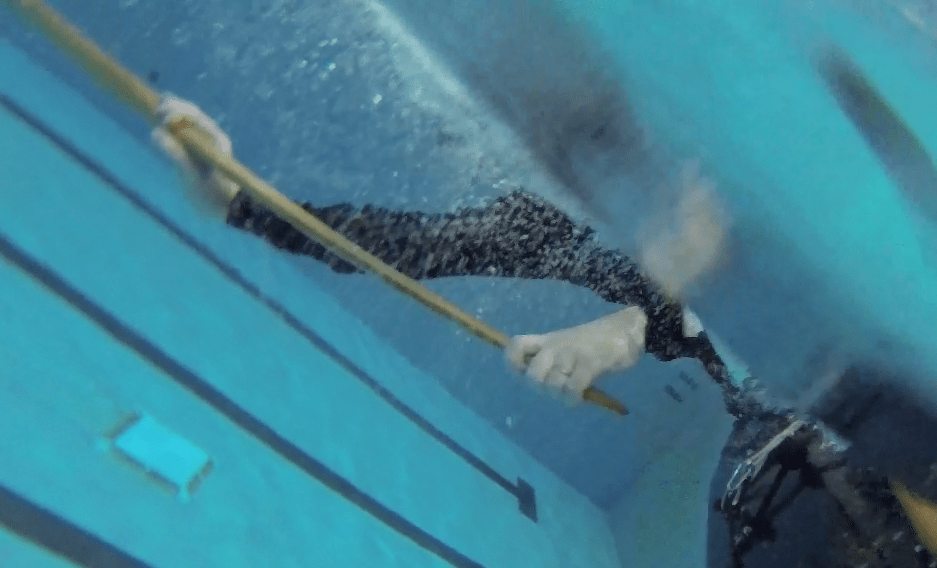 My testing then switched to rolling. I rolled for about 15 minutes, performing a mix of forward finishing, lay-back rolls and sculls on both sides using the paddle. During the reverse sweep roll the flex was very apparent and during one roll the paddle snapped. I had my GoPro mounted on the kayak foredeck and it captured the moment. The flex in the paddle is clearly visible. The paddle had previously survived over a dozen reverse sweep rolls, all of which I had videoed. The paddle broke just above my right hand and I used the remaining stub of the paddle to perform a norsaq or rolling stick roll. The rest of the pool session I used as an opportunity to practice rolling with both parts of the broken paddle as well as practice my rescues (seal, bow rescue, reentry and roll etc)

One key factor in the paddles performance was its flexibility. After the paddle broke I carried out a fairly unscientific measurement comparing it with three other paddles, my Joe O and Lumpy solid cedar paddles and my Novorca 86B carbon fiber paddle. I held each paddle loom in a soft jaw vice and then applied a force of 25 pounds to the paddle blade four inches from the end using a one inch wide strap. The VIPaddle tip flexed just over 5 inches, the Joe O paddle flexed 4.5 inches, The Lumpy was roughly 3 inches and the Novorca was 3.5 inches.

The VIPaddle snapped at the point where it decreases in thickness from the loom to the blade. Close examination of the break shows a 50% variation in grain density between the two edges of the blade. The grain gave way first on the wider grained side, the crack spread across the blade diagonally and down until sufficient wood had split that the remaining grain just snapped laterally. When I examined the paddle after it failed I noticed that the blade that did not break had a much higher consistency in grain density. 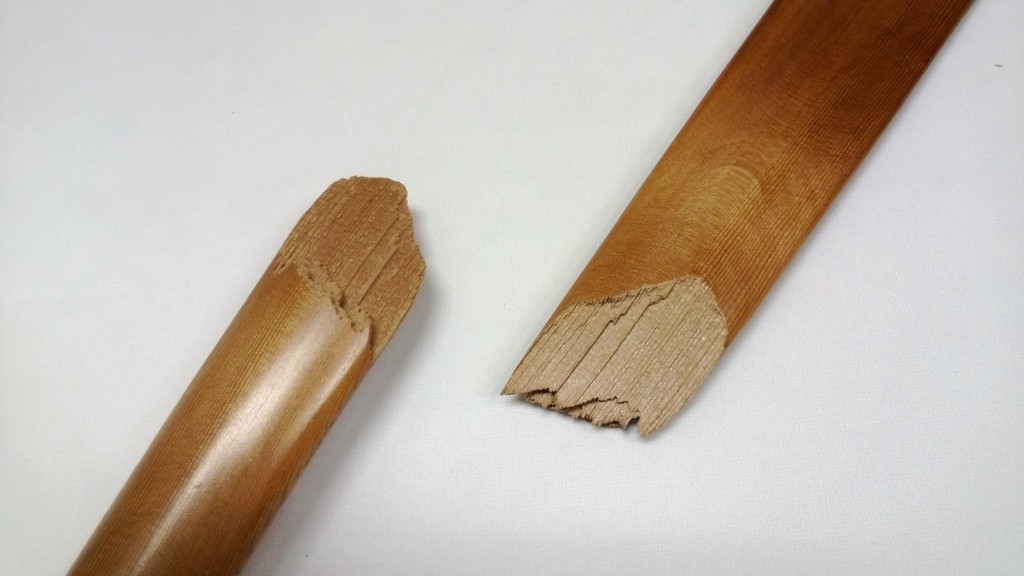 Note, I am not a paddle maker, and certainly not an expert in the art and craft of woodwork so treat my comments with the appropriate level of skepticism. It is my opinion that two factors contributed to the paddle not surviving the load applied to it. First the variation in grain density provided a weaker edge which allowed the grain to start separating earlier than the rest of the paddle. And secondly the rate at which the paddle reduced in thickness from the loom to the blade.

I spoke with Randy after the fact, and he responded well to the feedback when I suggested to bring the oval shape of the blade further down to the tip to increase the strength and create a more gradual transition between the loom and the blade tip.

Wood is not like carbon fiber, it comes out of the ground, not a factory. Wood’s performance under load will always be slightly unpredictable, whilst a great craftswoman or man can read timber’s behavior, no one can fully predict the performance of the paddle. Two factors seem to play a critical role in wooden paddle performance, the timber itself and the shape carved. I believe Randy is treating this as a learning experience and will continue to evolve his carving style. He seems to be focused on providing a high level of customer service, and this can only be applauded. Many people would have asked me not to publish this review, but Randy graciously agreed to it. Randy provides many demo paddles to people before they settle on a size and shape. If you wish to buy one of his paddles I suggest you also discuss the type of paddling and rolling you intend to do so he can factor that into the paddle he makes.

What am I taking away from this experience? First, buying or building a paddle is a complex task involving careful analysis and compromise. Second, be prepared for your gear to fail and have a plan to deal with it. As my buddy Jeff says: “Train for the worst; Hope for the best”. 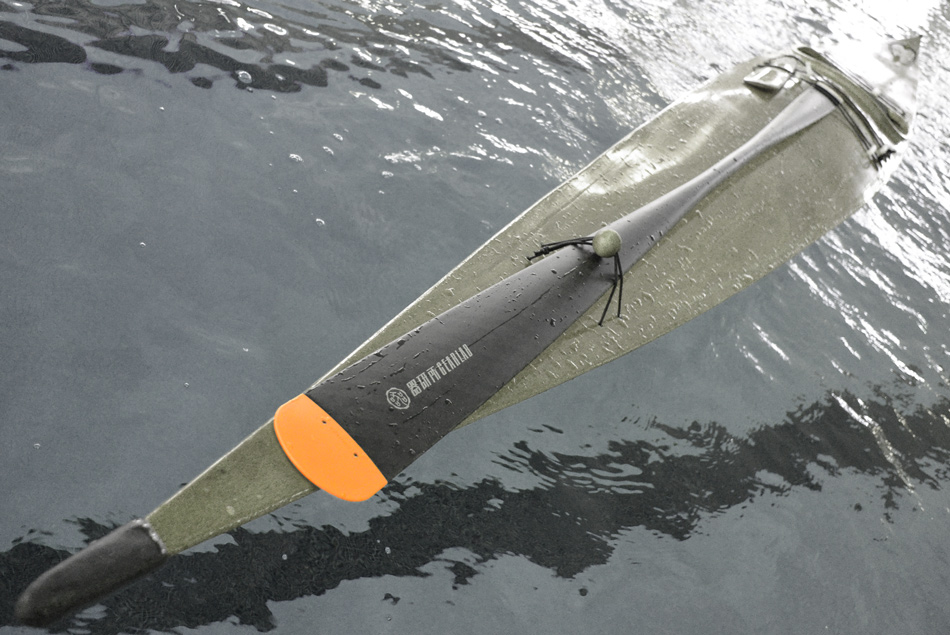