Winter has decided to squat on Spring in Minnesota this year. We were granted another delightful 8 inches of snow this past week, and have another forecast for this week. Being Minnesotans though we are making the best of it.

Video courtesy Peggy O’Neal
Despite screwing up a ferry glide in most spectacular fashion this weekend’s paddle was a blast. The Mississippi was running well, the St. Paul river depth gauge was showing the water a foot higher than the previous weekend. I met up with a large group of local paddlers at Hidden Falls and we headed up river towards the Ford dam. Unlike previous times the water was coming over the dam head creating very obvious recirculation. We kept well away from the dam to avoid the danger, but that did not prevent us having a lot of fun and learning a great deal. Below the Ford dam is a small low island that splits the flow. The west side is considerably narrower and shallower and we used this as our route upstream. Once we had crossed to the west bank we were able to regroup in a perfect back eddy sheltering us from the main flow.

The training challenge for the day was to attempt to turn a sharp 90 degree corner to the left with the water flowing swiftly from the left. (Route shown in the picture in red) Failure resulted in the kayak’s bow being whacked downstream in spectacular style and sending one straight into the choppy chaos of the confluence of the two streams. 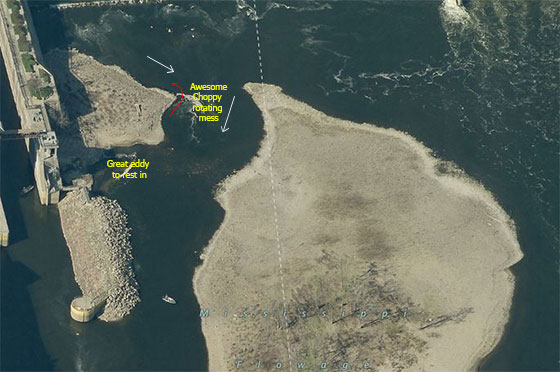 We established two solutions. The first was to attack the corner hard, maintaining a good speed on the approach and as soon as the bow entered the flow perform a couple of aggressive extended sweep strokes on the right, using the return stroke as a support stroke on the right. This was the muscle approach. It required good timing and being prepared to hug close to the rocks. If the bow was grabbed by the flow prior to you engaging your arms and core to throw the kayak around the corner then it did not work. I was fortunately able to get this approach to work well. I think the extended sweep with my GP allowed me to apply considerably more force than many of the EP paddlers could accomplish. Several people attempted to apply a reverse sweep on the left side, this stroke resulted in the kayak slowing down and accelerating their swift backwards demise. It was critical to maintain the kayak’s momentum relative to the fast flowing water. The second approach we developed worked really well and required a lot less effort. We slowly navigated our bows to the corner and then allowed the flow to align our stern parallel to the flow while never taking our eyes off the corner nor allowing the bow to move from it. Then we were perfectly angled to enter the strong flow and were able to control the kayak as we entered in a very fine angled ferry glide. Once we had perfected these two approaches it was time to get crazy so we practiced the turn with the kayaks backwards. This required careful concentration and kayak control, but Jeff and I were both able to turn the corner in reverse and navigate our way backwards. It was good practice for Jeff’s new training session “Bass Awkwards Paddling” which is two hours of moving your kayak backwards.
After a succession of practice runs I hung out in the choppiest area of water and practiced sculling braces. Warren Williamson, one of the icons of the Greenland Rolling scene, has written numerous times how valuable a skill it is to be able to hang out in rough water and time your recovery using a sculling brace. It certainly was a lot of fun to bounce around and be rotated by the currents while happily supporting myself and the kayak. 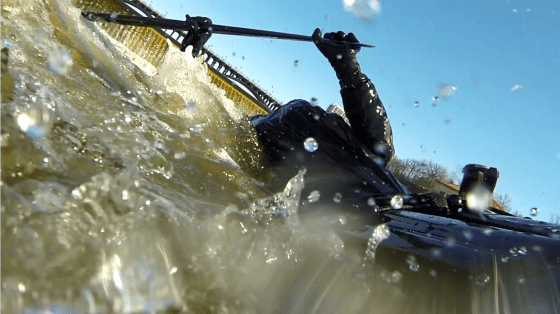 The morning’s paddle was quite a workout. I can still feel it in my arms and core as I type this post. I need to get back there again soon to continue learning how to control the Tahe Greenland.