At last the ice has melted and we are back afloat in Minnesota. Last week we were still getting frost warnings and today we are heading to the mid 90’s Fahrenheit. We already had to cancel our first scheduled rolling clinic. The ice went out on the lake the day the first session was scheduled. I did get afloat with a couple of friends but the beach was still full with the dock and boat lift, so the idea of hosting 26 kayaks was not viable.
I was able to reschedule a couple of the guest mentors, Pete Kuhn and Tony Schmitz, to help out on the 11th. And so this weekend we hosted a dozen paddlers. It was, as Winnie the Pooh would say, a blustery day. The wind was gusting over 35mph, white caps were blowing across the lake. The kayaks were being blown around on shore. And for some, paddling was challenging.

Three of the paddlers who showed up were beginners, with no roll yet. Pete took them through some land drills, then worked with them in the shallow water off the beach. I took a group into deeper water and we ran through some braces and rolls. We tried to find some of the larger waves, 12 – 18 inches to practice in. Several of the group had never rolled in anything but calm water. Tony took another group and introduced them to the delights of harpooning using his own harpoon and the one I purchased from Jill Ellis at Adanac Paddles.

I was paddling the recently acquired Nordkapp, I was delighted by its feeling of stability and control in the waves. I was able to comfortably maneuver around the rollers and perform a few hand-of–God rescues quickly. More to come on this boat as I gain experience with its characteristics.
We rotated groups between Tony and me. The cold water (37F) was enough to quickly give most people Ice-cream headaches. Once everybody was thoroughly cold we went ashore and I had a chance to work with a couple of the beginners, which is something that I find personally very rewarding. 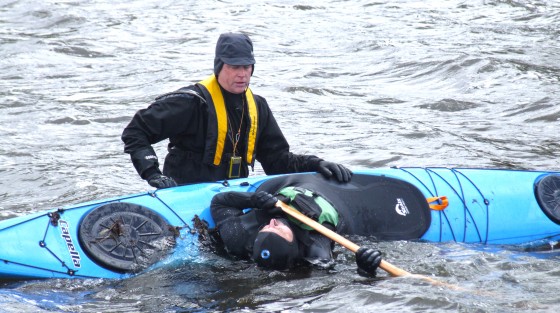 It was a great morning, despite the weathers attempts to thwart us. A terrific way to kick off the season of rolling clinics.
Photos courtesy Kathy Casey O’Leary

How a carbon traditional paddle is made

What’s in a word?