What’s in a word?

A good friend of mine, James Manke, recently traveled to Japan where he to took part in a Qajaq rolling event (GUTS) organized by Qajaq Japan. On his return he wrote about the use of the word “boat” being offensive to the Inuit that he met. He was told that as a part of respecting the Qajaq culture the Inuit are sensitive to the words used to describe kayaks. Qajaq is used to describe those skin-on-frame craft constructed using the traditional Greenland method, Qajariaq is used to describe other kayaks including hard shell and plastic ones. “Boat” is never used. The term was used by Europeans “invaders” when they arrived in Greenland, and this resulted in a derogatory connotation being established. In the early ’80 the Qajaq culture was nearly extinct in Greenland. Through the diligent work of a group of enthusiasts it has undergone a renaissance. Now there are well over a thousand members of the Greenland Qajaq community.
I recently reviewed the content of this website, and out of respect have removed any reference to “boat”. One challenge I had was how to refer to the shed that I use to house all my kayaks (Qajaq and Qajariaq). I contacted John Pedersen from Ilulissat in Greenland. He told me that whilst they traditionally don’t use sheds to house Qajaq in Greenland, they do build kayak shelters and they call them Qaannivik.
Ron Steinwall was gracious enough to carve this sign to hang above the door of my qaannivik: 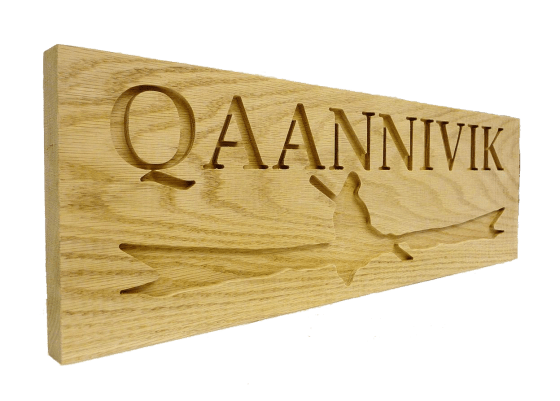 It is very easy to argue the etymology of the word “boat” and use this history to defend its use. I choose not to. Instead I plan on respecting the wishes of those who descended from the mighty Inuit hunters of Greenland. I choose to call my kayaks Qajaq (or Qajariaq). What you do is up to you.