This past weekend I led a three day trip up the North Shore of Lake Superior in Minnesota. There were six of us, each at very different places with our paddling skills and experience of paddling Lake Superior.

I car pooled with Jeff, bringing along the kayak trailer to allow vehicle consolidation once we all arrived. We camped at Tettegouche State Park on the lake shore. The rain relented long enough for us to pitch tents and erect the tarp in relatively dry conditions. Everyone arrived before dark, and after checking the near shore forecast we planned our first day’s paddling.

We traveled an additional 90 miles north to the town of Grand Portage, situated in tribal land at the extreme North Easterly end of Minnesota where it meets Canada. We had arranged to leave our cars at the old Voyagers Marina, the Isle Royale Ferry terminus.

Patchy fog was forecast. I have had experience of navigating in fog and I know firsthand how disorienting it can be for some people. We divided the paddlers into two clusters each with sufficient GPS, radios, strobe lights etc. to ensure that they could if necessary operate independently should the need arise. Should it become necessary, Lisa was to lead one and I was to lead the other. We paddled out from the marina and went in search of the Spirit Tree, a sacred old withered tree down at the lake shore. A place where tribal legend requires tabaco offering to be laid to ensure safe passage. Joan had bought along the requisite cigarettes and a suitable amount was offered to the tree. All the time we were shrouded in dense fog, providing an eerie vista.

Prior to making our crossing to the Susie Islands we grouped up and discussed the potential risks and hazards. The group decided we should cross, so we headed off on compass bearings with GPS way points as back up. The crossing was an uneventful two and a half miles of paddling through fog with about 200 yards visibility. We rafted up once for a hydration and snack break. Jeff rolled to cool down (His tuilik and wetsuit were causing him to overheat). We saw one other vessel the entire trip, the Tribal Enforcement Patrol. They checked us out and then left us alone.

As Susie Island emerged from the fog we entered a lovely sheltered bay with a steeply shelving pebble beach. We landed here and had lunch. As we munched, the fog thinned out and we were treated to enticing glimpses of neighboring islands.

Lisa has paddled the Susie’s previously and after lunch, at her recommendation, we headed off to Magnet Island. We decreased our journey time by navigating through a shallow canyon cut through the tip of Susie Island.

Magnet Island provided a veritable feast of rock gardens to play in. The sea state was such that there were only small one foot waves rolling in to play in, but even with such small waves the area was fun to maneuver around.
We circumnavigated Magnet Island and then headed to Lucille Island where we stopped for a brief break. I rolled my Nordkapp just off the beach. The water was incredibly clear and a brisk 37F.

Our path home was a direct crossing from Lucille to Hat point, two and a half miles of downwind paddling that passed quickly. We made our way back to Voyagers Marina without incident. Throughout the day we had been periodically listening to the NOAA forecast on the radio. A slight chance of thunderstorms had been indicated, but none had been seen or heard while we were afloat. After this we landed, loaded our kayaks and headed up the highway and pulled into an observation area that overlooks the Susie’s. From this vantage point we could see in the South West a large storm system approaching. Our timing had been very fortunate. 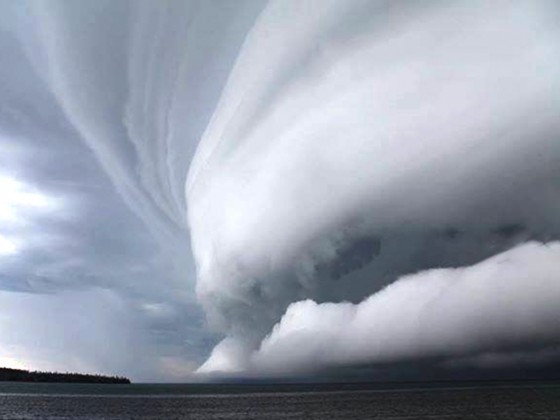 Our original plan for the next day was to paddle out of the Baptism River and enjoy the coastline north and south. The forecast and actual conditions were for conditions that would have made some of our party distinctly uncomfortable, so we went to Plan B. Plan B involved a forty mile drive into the Boundary Water Canoe Area (BWCA)to Brule Lake.

Brule Lake is a gorgeous mile and a half wide lake stretching over ten miles east to west. Numerous islands and intricate bays add to the interest. Boreal forests come down to the water’s edge, and wildlife abounds. The BWCA is a National Forest and so is covered by numerous regulations that must be adhered to. The maximum group size is six people or four boats, thus we split into two groups. We paddled east to Brule Bay where we stopped for lunch. Jeff’s skin-on-frame Qajaq had developed a leak so he and I set about finding and fixing the leak. My handy dandy repair kit came into its own and provided a large piece of Tenacious Tape to repair the two holes we discovered.

While Jeff and I repaired the Qajaq the others paddled over to a portage route where we had heard there was a beautiful waterfall. Our return trip was via the north shore of the lake. As we tucked our kayaks’ noses into North Bay a distant roll of thunder caught my attention and so we turned south and headed back across the lake, weaving our way through the myriad of islands before returning to our launch point. By the time we had landed the waves had built sufficiently to allow us to catch rides and surf along. An excellent end to a lovely gentle paddle.

As predicted by the forecast our final day had the best weather. Bright sunshine and gentle winds made for a glorious day of paddling. After carrying the kayaks the hundred yards or so down to the mouth of the Baptism River we launched into Lake Superior and headed north east along the coast.

We beached in a secluded cove in Crystal Bay and took a short break before making a beeline back to Tettegouche where we stopped for lunch.

Our afternoon paddle took us South West along the coast to Palisade head where we played in the rocks, caves, slots and arches.

For several of the paddlers it was their first time at the Head and it was fun to see the expressions of surprise and wonderment as they saw the magnificent cliffs and caves.

Additional photographs from the trip are available here.