When you are stuck, stop

Rolling a kayak consistently has a lot to do with developing good muscle memory. As we repeat the motion of a roll our body learns the sequences of muscle movements we need to execute to perform it, and we develop muscle memory.
When learning a roll we inevitably fail a few time along the way. It is important that we don’t reinforce an incorrect body position or motion by constantly training our body to fail. But how can we learn a roll if we can’t keep practicing the roll because it fails?
This weekend I was working on several rolls to improve the fluidity or smoothness of execution, and decrease the effort needed. My off side Storm roll is effective but I am using too much arm strength. I did a few rolls concentrating on what I thought the issues were, but that didn’t help. Simply repeating a roll that I am not very efficient at did not improve it. Instead I needed to focus on the mechanics of the roll and break it down into steps.
Forward finishing rolls all generally have two similar stages to the recovery. First a portion where the roller’s back goes from a concave shape to a convex shape as the head is plunged down, followed by a forward motion stage where the head moves towards the front of the kayak. It was evident to me that the forward motion was missing on my offside. 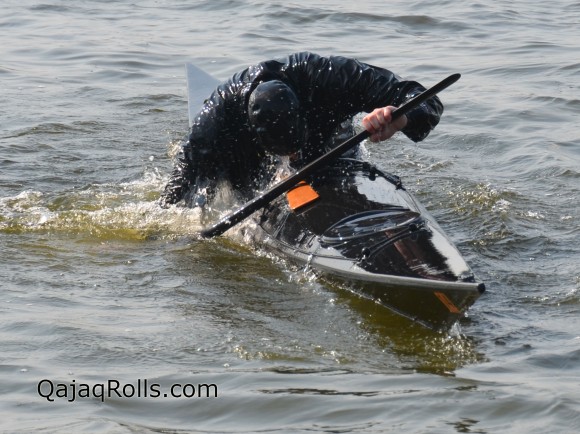 The chest scull is my go-to practice technique for forward finishes. It is very evident when recovering from a chest scull how much force is being used by the paddle. If you are using a lot of force you will quickly feel it in your upper arms and shoulders. By pausing when you recover you can quickly see where you head is in relation to the deck and cockpit to determine if you are low enough and forward enough.
I performed a few onside chest sculls and recoveries and then switched to my offside. By thinking about the feeling of the motion I was able to appreciate that I was not using enough of my legs and thigh muscles to rotate the kayak and so instead I was overusing my upper body to right the kayak. Having identified the first issue I set about practicing how to rock the kayak with my legs while underwater (the method of practice is described in this blog post Subtlety not strength).

Once I started using my legs correctly I was able to identify that I was finishing much higher on my offside than on my onside. I did this by holding my finishing position, when I was upright, and seeing where my head was. My offside finish was about 6 inches further aft than my onside finish. I was not using my oblique muscles to pull my body forward, so the last part of the recovery was missing. I went back to using an avataq to practice that motion and reinforce the forward nature of the recovery.
After five minutes of avataq and chest sculling practice I returned to practicing the roll. Voilà, I was now rolling with much less arm effort and my finish was low and forward.
Next time you are stuck on a roll, think about not practicing it for a while. Find some alternative muscle training exercises and use those to reinforce good muscle memory. Train your muscles to do the right motion. Then, and only then, practice the roll again.

Sculling success on a busy weekend