Greenland Rolling in the UK

I recently returned from a trip to the UK. During the trip I was fortunate enough to be able to spend a couple of days afloat. The first day was spent paddling with my father in the vicinity of Plymouth Sound, enjoying the fast tides, salty water, rock gardens and secluded beaches of the stretch of coast westwards towards Rame Head. The second day was spent at the Mount Batten Water Sport Center teaching rolling. 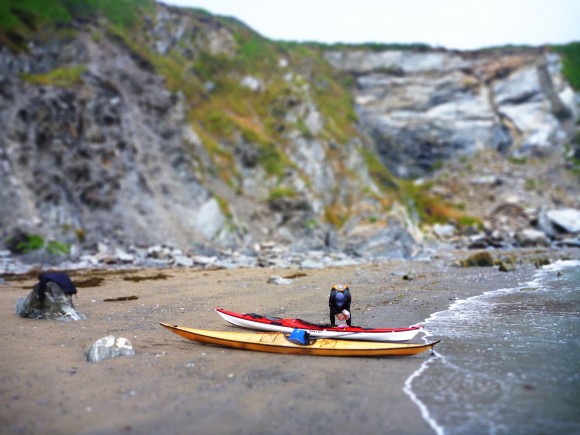 I ran three separate rolling clinics. Each filled within an hour of being open for registration. Like all my clinics these were offered at no charge, continuing the spirito Inuit. Demand for rolling mentors is clearly substantial in the UK, and several people travelled a considerable distance to get to Plymouth.
The rolling was great fun, and everyone was very engaged and eager to learn. The standard of rolling varied from people with no roll to those who wanted to focus on more advanced lay back rolls, as well as a few working on forward finishing rolls. 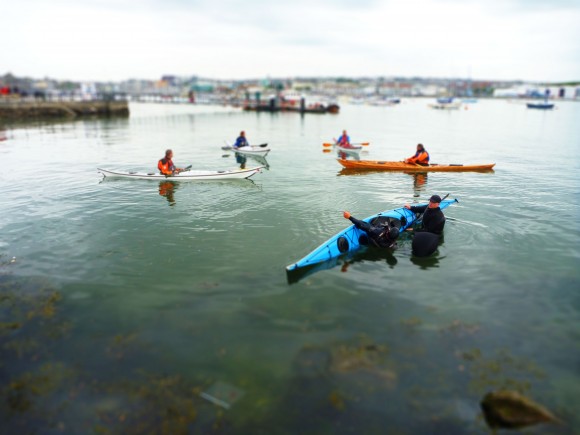 The gear that people showed up with was superb, a wonderful collection of sea kayaks, including some of the latest models from Tiderace, and a lovely strip built design from Ram Leisure. The paddles also varied considerably. One person came with a BlackLight paddle from Sweden, and this gave me my first opportunity to see and handle one. Several people showed up with wooden Greenland paddles, either commercial or self-made, and a few showed up with commercial Euro-blade paddles.
The BlackLight paddle was intriguing. It is clearly engineered to a very high standard, and the finish of the carbon fiber and resin was impeccable. The paddle was a two part version. The loom cross-section was oval, as was the carbon tube insert that connects the halves. The oval shape prevented any rotation and provided for a very solid feeling joint. The blade and tip profile was very flat and thin. There was barely any curvature to the blade surface at the tip and the edges of the blade tapered to a narrow edge before rounding. The blade’s profile certainly caused it to be more sensitive to the angle of rotation during sweep strokes, sculling and rolling. I would describe it as a highly technical high performance paddle, and now any doubts have been removed, I definitely want one. 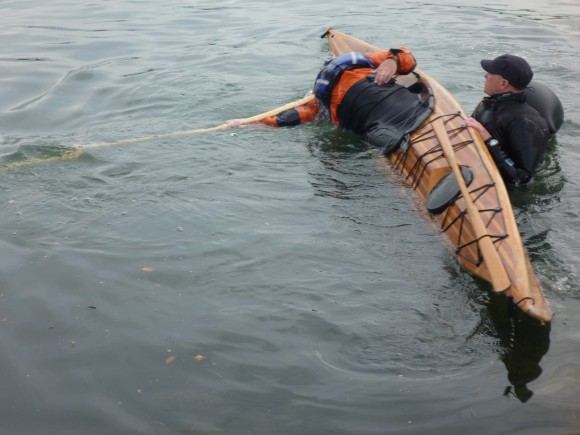 Richard Bracey, the owner of Ram Leisure, presented me with a wooden Greenland paddle that he had made. Richard hand makes Kayaks and paddles of many varieties. He showed up at the rolling clinic with a strip built kayak of his own design. The kayak looked similar in profile to the Night Heron design but with a lower profile. It rolled very well and Richard, and his partner, were able to hold a very comfortable static brace in it. You can contact Richard through his web site: Ram-leisure.co.uk
I bought a three part Greenland paddle with me from the US, along with my drysuit, tuilik and other paddling gear as checked luggage. Unfortunately the TSA are still banning kayak paddles as hand luggage on planes. I used my father’s 1977 Anas Acuta while I was paddling. I also had the chance to roll a bunch in it, as it was sometimes necessary to cool down, and frankly I just like to roll when I paddle. I have previously rolled a modern Anas Acuta at Michigan Training Camp. The early version rolled extremely easily. The nice rounded foredeck made forward finishing rolls very smooth and easy to initiate, and the low back deck provided a gentle recovery for lay back rolls.
The salt water was wonderful. I have become accustomed to the sting associated with fresh lake water. Being able to open my eyes underwater and enjoy the view was a lovely change from my home waters. The area where we held the clinics is very tidal, and we were there for one of the largest Spring tides of the year, with nearly five meters difference between high and low water. This meant we had to be constantly keeping an eye on the water depth and adjusting where the rolling was taking place to avoid the bottom. 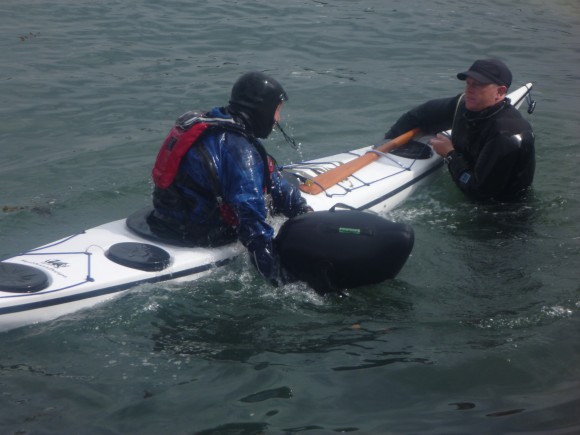 My avataq was kept busy, helping the many people who got their first Greenland roll during the clinics. Others expanded their rolling repertoire considerably. A couple of the more flexible paddlers were able to advance considerably, and consequently got their norsaq and hand rolls. We also saw success with forward finishing rolls, both storm and reverse sweep being developed and solidified.
I had a wonderful time at the clinics, and everyone was very welcoming and appreciative of the time we spent together. It is always a pleasure to see such strong progress and smiling faces. I am hoping to influence a few more mentors to visit this area of England so we can continue to develop the cadre of Greenland rollers. There is no shortage of demand for training.