Paulo Ouellet is a man on a mission to create traditional paddling gear that is comfortable to wear. He has created a unique take on the Inuit tuilik. This week I received a custom made tuilik based upon the multitude of measurement I filled out on the Comfort Paddling web site.
When first examining the tuilik some of the differences between it and the other commercially available tuiliks were instantly apparent. The dry suit wrist gaskets, the soft neoprene hood seal and the soft neoprene around the cockpit seal to mention a few. Also the fabric was significantly different. Up until this point I have used two other tuiliks extensively, one made by Brooks of Canada and the other by Reed of England. The Brook’s tuilik is made from 3mm neoprene, the Reed tuilik is made from 1mm Aquatherm fabric. The Comfort Paddling tuilik is made from a breathable fabric similar to Goretex.
Being made of thin breathable fabric, the tuilik does not provide the thermal insulation that the other tuiliks offer, but it does provide excellent protection from the wind. Additionally it does however provide one unique property, watertight seals. The neck and wrist seals of all my previous tuiliks leak. I can reduce the leak to a small dribble by cranking down hard on the ropes, elastic or Velcro, but they still leak. This means I frequently wear a drysuit under my tuilik in order to remain dry. The Comfort Paddling tuilik is a different animal, as it has seals like a drysuit. Throughout all my tests the wrist and face seals remained impervious to water. More about this aspect later.
I put the tuilik through a diverse set of tests, first in my home lake in Minnesota. I spent thirty minutes working on rolls, probably performing somewhere close to fifty rolls. I noted two things during this session. First was the flexibility, as the cut of the fabric made me feel unconstrained. Unlike other paddling wear I did not feel restricted at all by the tuilik. I was able to layback, rotate, and crunch forward all without feeling like I was pulling at or stretching the fabric. The second noteworthy item was the buoyancy. Considerable discussion has taken place about how a neoprene tuilik is a “cheater tuilik” as it helps you float during the rolls. The Comfort Paddling tuilik floats well. Being made of such a light fabric the air inside quickly rises towards the surface and you can feel the benefit of the air’s buoyancy during rolls and braces.

The wrist seals are covered by a layer of the breathable fabric and closed with a Velcro strap. Initially I closed them tightly with the Velcro, as this is the usual approach with a Brooks tuilik. After rolling with the straps tight I found that water collected in my wrists under the fabric but outside of the wrist seals. It felt weird to have water collecting at my wrists. The solution I found was to release the tension from the wrist straps and instead keep a small gap around my wrists to let the water drain. An alternative might be to fit a drain hole to the wrists to allow them to drain whatever the tension is on the straps.

The next chance I got to use the tuilik was during a surfing session on Lake Michigan. As usual the surf rotated me in many directions testing not just my surfing and rolling skills, but also putting my gear to the test. Lake Michigan’s water temperature was in the low 50’s and this was quickly apparent when rolling. My head got cold when lying in the waves enjoying a static brace to recover some energy. The lack of thermal insulation in the tuilik was quickly remedied with a long sleeve polartec fleece and a smart wool beanie. The tuilik’s watertight seal kept these clothing items dry throughout the session.
The version of the tuilik I purchased came with a tunnel. The tunnel’s purpose is to seal with dry suit pants to create a complete dry system of paddling clothes. I have ordered a pair of these pants to try, so stay tuned for my findings. I bring up the drysuit like nature of these items to mention one important consideration. Unlike a drysuit there is no neck seal. The waterproof nature of the tuilik is derived from the wrist seals and the face seal. If the hood is not up and fitted snugly then you are not going to be able to rely on the drysuit properties which it can offer. If you like to paddle with your tuilik hood down then you will need to dress for immersion under it. It would be interesting to consider adding a neck gasket under the hood to allow the full range of paddling options, but maybe that would be uncomfortable? 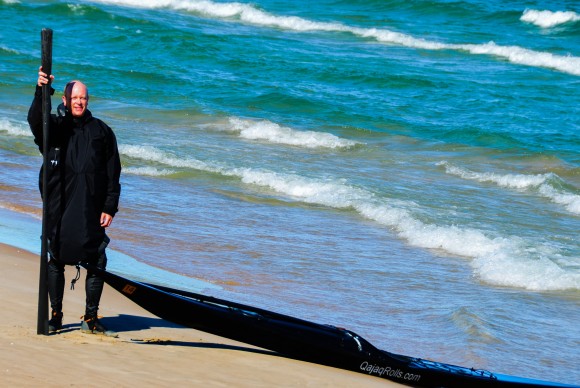 The next day’s paddling was quite different, a relaxed paddle, in warm weather, covering many miles, accompanying my wife along the coastline of Peninsular State Park and the proximal islands. If you have ever paddled in a drysuit on a warm day you know that they get damp. The dampness is not from the water you are floating in, instead it is that odiferous moisture that drips off your body called sweat. I wore my PFD under the tuilik, and this allowed the entire external surface of the tuilik to breath. I was pleasantly surprised at how little moisture collected inside the tuilik. As expected the moisture collected at the wrists just like a drysuit, and the rest I am sure vanished downwards and out of the tuilik into the kayak.
During the day’s paddle the winds rose and the sea state rose to match it. As the waves broke over the bow of my Tahe the tuilik was awash in the spray. A small amount of water collected in front of me in the folds of the tuilik, much like on a nylon spay skirt. At no time did I feel like there was any danger of the tuilik giving way and allowing the water in, but is was an unusual sensation to have a cup sized puddle in the cockpit area. In several of my warm weather touring skirts there is a small plastic batten, much like those found in sailing dinghy sails. The batten helps lift the skirt and prevent the downward ballooning that allows water to collect. The addition of a simple batten in the tuilik might aid in this area.

The head and face fit of the Comfort Paddling tuilik is superior to any I have previously tried. First it is easy to get on and off, including when you pull it down when you want to paddle with the hood down. Secondly the adjustment is very easy. First you tighten the strap behind your head then you pull down on the elastic at your chin. Even with the elastic pulled tight the soft neoprene prevented any discomfort. By contrast the Reed tuilik is tough to get on due to the tight fitting of the tuilik on my neck and small face opening. The Brooks tuilik has to be pulled really tight to seal and is frankly uncomfortable at times.
The cockpit seal on the Comfort Paddling tuilik is made from a very soft neoprene. The neoprene seals extremely well. I experienced no leaking through all the test paddles. I do wonder how robust the soft neoprene will be over time, especially if I performed a seal rescue across the deck and cockpit. Being neoprene it would be very easy to fix should it need attention. Perhaps the front section coud be armored like many high end sprayskirts.
I don’t think this tuilik is perfect (yet), but I am very excited by it. I am looking forward to trying the dry pants which, if they perform as well as I expect, could create a unique traditional paddling outfit, second to none. If you are in the market for a tuilik then consider getting Paulo to custom make you one. I doubt you will be disappointed; I wasn’t. This tuilik rocks.
You can contact Paulo and get a custom tuilik made through his web site.

A Qajaq journey of discovery