Plan A was to visit Devil’s Island in the Apostles. A progressively worsening forecast put the kybosh on that idea. With a forecast predicting five to seven feet waves with the wind on our nose, temperatures in the low teens for a high and the potential for precipitation we decided not to head east along the southern shore of Lake Superior.
I got up at 5am, showered, drank a couple shots of espresso, hooked up the trailer to the Volvo and headed north to find Bernie. It was still pitch black when I backed the trailer up his driveway and knocked on his front door. We loaded Bernie’s Explorer alongside mine on the trailer, threw his gear in the back of the car and headed north into the cold darkness.
We had a few ideas for alternatives to the Apostle Islands. Visiting the Boundary Waters Canoe Area was high on my list, however due to the plummeting temperatures up north we heard reports of the lakes already skimming over with thin layers of ice. Visiting the sauna islands off Thunder Bay in Canada was another idea, but the forecast was calling for strong winds parallel with the islands and I had been warned of the funneling effect between the mainland and the island creating substantial seas.
Despite several trips to the North Shore of Lake Superior, Bernie had never paddled around Palisade Head and Crystal Bay, two beautiful sections of coastline, with some magnificent natural features to explore. We settled upon this as the destination for Sunday, with camping at Split Rock.
The near shore forecast was for building winds, starting in the northwest, then backing to south west and strengthening. My preferred launching point for this section of the coast is at Baptism River, a small creek that enters the lake in the heart of Tettegouche State Park. It requires a portage down some steps but with two of us we bought the kayaks and gear down in four easy loads. 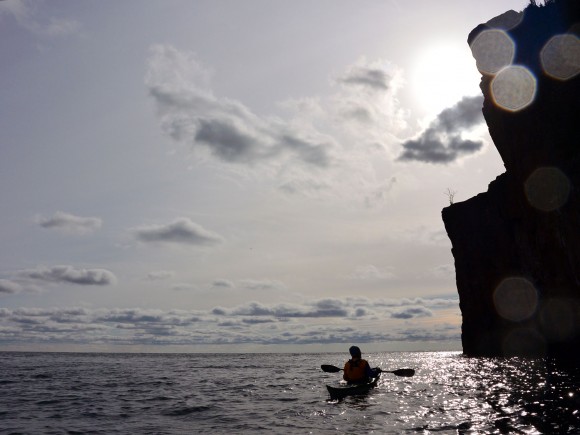 The coastline runs north east to south west, so the wind was initially offshore and was forecast to become parallel. Palisade Head was upwind of our launch site and we headed there first. It was great to be paddling with a fit competent partner, we kept a swift pace going and covered the mile and a half rapidly. As we traveled along the headland marveling at the beauty of the red and orange cliffs we saw parties of climbers braving the temperatures and ascending the overhanging cliffs. 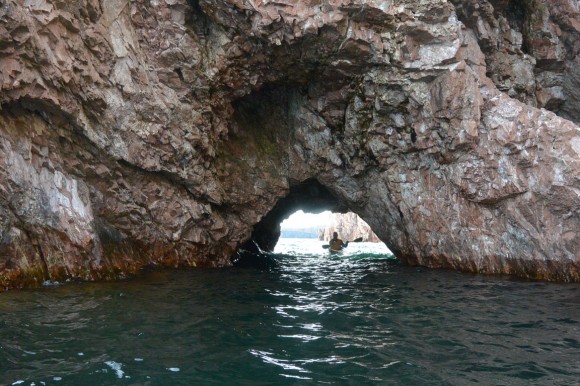 The lake was calm with wave generally less than two feet. With careful timing we both paddled through the sea caves at the southerly end of the headland, before turning north east and retracing our path towards the put in area. The paddle back was equally rapid especially with the waves now providing us the occasional ride. 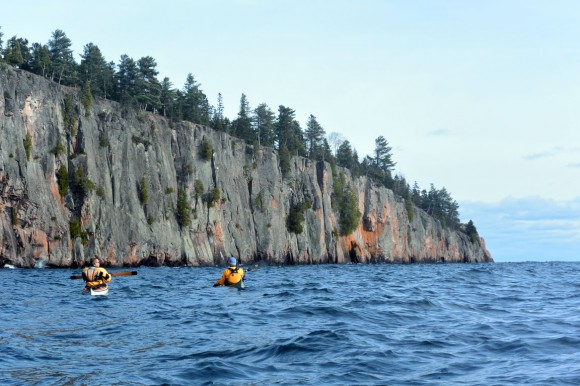 As we approached Baptism River we noticed another paddler launching. To my surprise and delight he was another skinny sticker, using a Greenland paddle he had purchased from the Folk School in Grand Marais. Dave, as we discovered he was called, is a guide for one of the outfitters along the North Shore and was coming out for a paddle and rolling practice. He tagged along with us for the remainder of our paddle.
We headed past Tettegouche and out along Shovel point. The sheer cliff face jutting out into the lake was reflecting the waves and creating some clapotis and we stayed close to the cliffs playing in the messy water. As we rounded the point I was able to catch a few waves and entertain the watching tourists with some surfing. 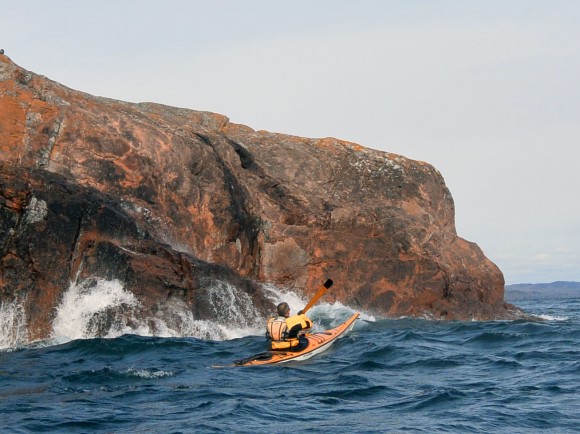 We headed north east along the coast and into the bays, coves and caves that make up Crystal bay. The conditions were perfect for Bernie’s first visit to the area. Shovel Point providing enough shelter to calm the lake sufficiently to make entry into the caves safe. Eventually we reached the furthest cave and after the obligatory venture into the cave we turned around and headed back along the coast towards our put in. 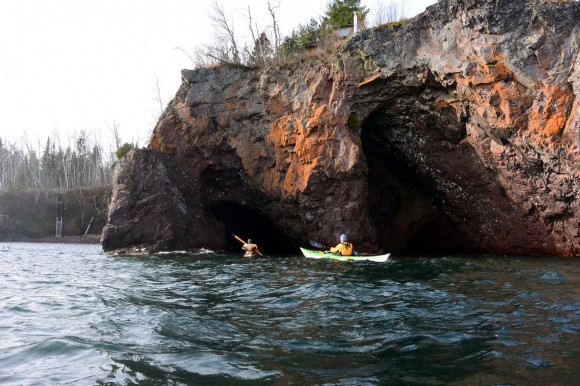 As we approached Shovel Point from the north we started to feel the lakes power, the swell grew in size to just over three feet. It is relatively easy to estimate wave height when they are three feet or less, you just watch other paddlers and see what remains of them when they are in the trough. When you just lose sight of paddler the waves are about three feet high. As we approached Shovel Point the waves were clearly growing and as Bernie commented they were breaking against the headland creating quite a spectacle.
By the time we reached Shovel Point it was clear that the last three quarters of a mile were going to be an “exciting slog”. The waves had built to between three and five feet, and then they were reflecting off the vertical wall of Shovel Point. Simple physics explains how the reflected waves interfere with the prevailing waves and create both calming and exaggerations of the underlying wave heights, clapotis is the kayaker’s term for these conditions. Due to the wave direction and the corner created by the coastline and shovel point, there was one particular area where repeatedly three waves would mesh together creating a foaming mountain of water. To be honest that was an intimidating sight. David later told us that the locals call this wave the Three Sisters after the mythical waves that legend has it sunk many a great ship on the lake, it didn’t sink us.
The waves were disorganized and big, easily surpassing six feet at times. The kayaks performed extremely well, rarely burying into waves. Generally the bows rising up the face and pivoting to slide down the backs. I kept a vigilant eye over my shoulder, firstly to ensure Bernie and Dave were doing okay but also to keep an eye out for the reflected waves. Numerous of the reflected waves provided the opportunity to surf into the wind, a really strange feeling to be roaring into the wind which by now was a steady 20 mph with occasional 25 mph gusts. The gusts whipped the tops of the waves sideways creating clouds of spray. I should state that the weather behaved exactly as forecast, the conditions were not a surprise.
My GPS showed the huge variation in speed as we crossed the last three quarters of a mile. The worst waves dropping our speed down to a near standstill and the largest surf accelerating us to the upper sixes. I kept my hips loose and concentrated on paddling with good form, the kayak took care of the rest. As I looked back at Bernie it was an impressive site to see six feet of his kayak sticking out over the top of a wave then come crashing down the back as he plowed through the clapotis. Not surprisingly I kept both hands on my paddle so no photographs were being taken during the excitement.
The whoop of combined delight and relief from Bernie when we landed said it all. What a beautiful, exhilarating and challenging paddle we had. A great testament to our equipment and the years of training. Bernie declared it was his “world record” for wave conditions with a huge grin on his face. 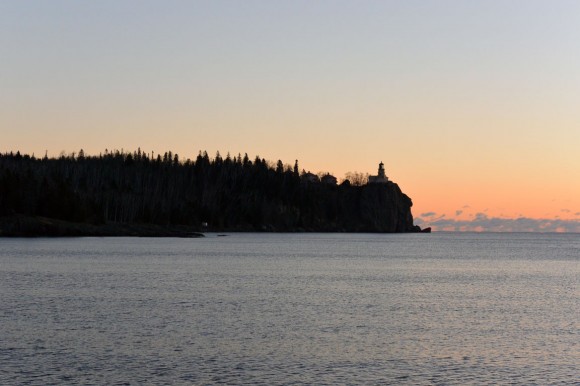 After portaging the kayaks and gear back to the car we drove to Split Rock State Park. Unbeknownst to us this weekend was the anniversary of the sinking of the SS Edmund Fitzgerald. As part of the anniversary the Light House was being illuminated. Literally hundreds of people were lining the beach watching and photographing the lighthouse as the sun went down.
We set up camp swiftly in the rapidly dropping temperatures. The forecast called for temperatures to drop in to the teens Fahrenheit. After a quick rehydrated meal and a dram of Irish whiskey to celebrate the paddle we headed off to our respective tents. Not surprisingly it was a restless night, the first night out for me is generally a time to get accustomed to the feeling of sleeping outdoors, the sounds, temperatures and firmness of the sleeping pad. 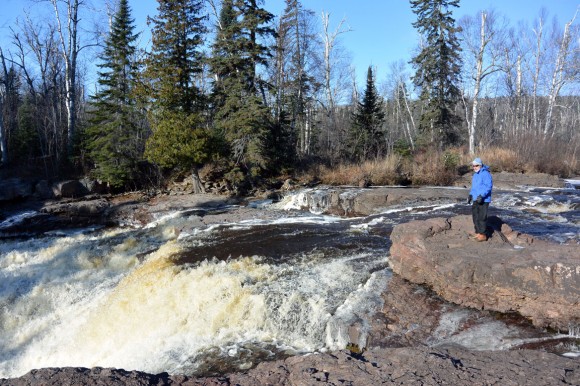 We awoke to the expected cold weather. The ambient temperature was seventeen Fahrenheit but the stiff breeze provided for a chilling minus one wind chill. We looked out at the lake and knew instantly that there would be no paddling for us on Lake Superior that day. We determined instead to hike and see some of the beautiful waterfalls in the region. 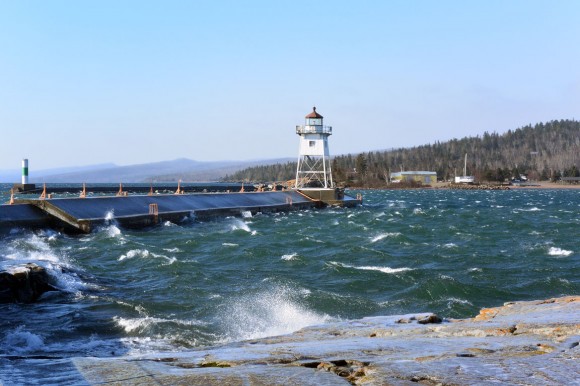 The wind was by then gusting to 46 mph according to the marine observation point. We ventured out along the breakwater as far as we dared, hanging onto the guard wires and leaning into the wind. The harbor was churning with short steep waves. Spray was blowing from the tops of the waves and freezing in midair. The ice spray covered us as we stood there photographing the amazing conditions. The pelting of the ice and the intense chilling of the wind forced us to beat a swift retreat to the local coffee shop where we watched with awe as clouds of ice were whipped up and roared out into the lake. 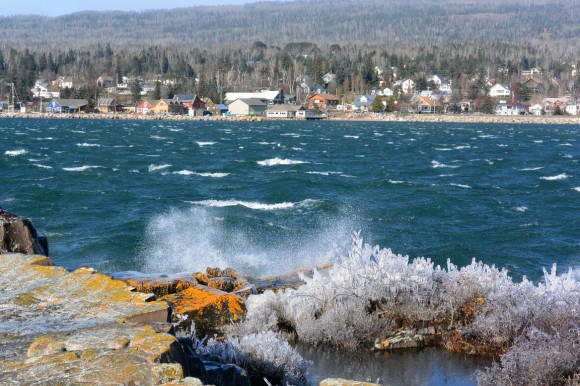 We had obviously made the only decision possible, not to paddle, it is hard to imagine anyone surviving long in the conditions we witnessed.
We broke camp and drove the long road home, happy to have sneaked in a wonderful paddle.

Many more pictures from the trip are visible here.

Bernie just sent me the NOAA Near Shore forecast for the day we paddled – they nailed the conditions perfectly: