Greenland rolling is like yoga, you can go through life without doing it, but if you do it your life will improve. That sentence alone should have been enough for some to stop reading further. Many people that I speak with have dismissed Greenland rolling for a variety of reasons; they can roll already, Greenland rolls have no practical purpose, the rolls don’t work in conditions, the rolls end in the wrong position to keep paddling, Greenland rolling is just for posers, they don’t want to compete, they don’t work in their kayak. I could keep going.
A while ago I was reading a forum thread and it was suggested that Greenland rolling and qajaq building should not be promoted and instead cherished and held close to the chest by the few devotees that were conversing. Personally I disagree with this opinion. Greenland rolling has enabled my paddling to improve in many areas, not just in rolling. By highlighting the benefits I hope to convince a few more people to give it a try and learn to roll their kayak the Greenland way, in the “Spirito Inuit”.
To truly understand Greenland rolling one must look through the plethora of documented rolls and examine the underlying principles that span them all. If one looks beyond the theatrics of the competition rolling list one can quickly classify them into four groups based upon starting and ending body positions. Starting forward finishing aft, starting aft finishing forward, starting aft finishing aft and finally starting forward finishing forward. In each of these groups the ending position is with a very low center of gravity with either one’s chest or back as close to the respective deck as practically possible given the paddler’s physique and kayak. There is an additional element to the finishing position that is often overlooked, the paddle, norsaq or hand is in a brace position ready to provide support as needed. A high brace when the paddler’s back is on the deck, and a low brace when the paddler’s chest is on the deck. This is a Greenland rolling principle – finish low, in a brace. 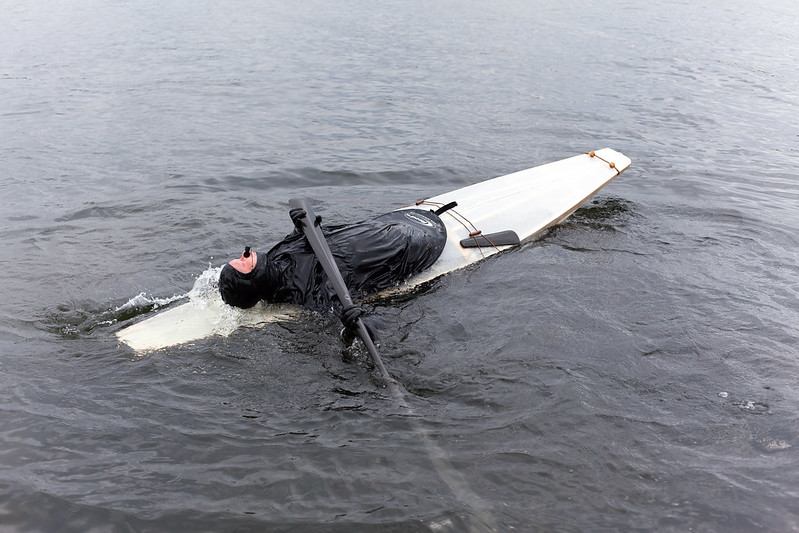 Each starting and ending body position described above is practiced in five consistent ways; first with a paddle, then with a norsaq or rolling stick, then with an open hand, then with a clenched fist, and finally with a brick held in the hand. By following this development progression one learns to stop depending upon the powerful lift created by a paddle and instead focus on using the entire body to right the kayak. Using one’s torso to float, one’s abdominals and legs to move the kayak, one’s back to arch towards the surface and one’s arms and shoulders to maximize the righting moment. This is a Greenland rolling principle – right the kayak using all your muscle groups not just your arms pulling on a paddle.
I have written numerous articles on the importance of using your buoyancy, so I won’t belabor this point, it is however often over looked how important it is to transition through the floating position while rolling. Greenland rolling is executed by passing through either a face up or face down body position. In both situations the same mechanical advantages are used. The shoulders and chest are parallel to the surface and positioned the maximum distance from the center of rotation of the kayak to allow the greatest moment of force to be developed by one’s buoyancy. Invariably this requires considerable flexibility to get one’s spine perpendicular to the keel and with one’s torso rotated perpendicular to one’s legs. Let’s be honest though, some people don’t float. Despite not floating, if the perpendicular body motions are used then the effect of the water resistance acting on their body is maximized by increasing its moment and so the principle still holds true. This is a Greenland rolling principle – move your body perpendicular to the kayak to maximize the righting moment.

Putting these principles into practice creates several opportunities that may not exist for people who are not practiced in Greenland style rolling. Let’s think for a moment about how we capsize. A momentary loss of balance, tripping over one’s own paddle, the impact of a wave. In each of these situations the only thing that is predictable is that the position your body is in, and its relationship to the paddles location is going to be unpredictable and varies considerably. Greenland rolling provides methods of righting the kayak from nearly every possible position without additional setup. When one starts out with a single roll that can be executed on just one side, the single option for recovery entails moving one’s paddle and body into a well-defined setup position from which one’s muscle memory can be engaged and the kayak righted. Probably the greatest cause of blown rolls is a hurried and potentially imprecise setup that drains one’s oxygen, creating muscular and mental tension and inhibiting the muscles’ memory from righting the kayak correctly. This results in an ignominious wet-exit. Accomplished Greenland rollers should need very little setup or adjustment when they capsize. Their skills provide them a map from any starting position to either ending position. This skill provides the potential for more reliable rolling and the ability to choose where on the kayak to recover: the fore or aft decks. 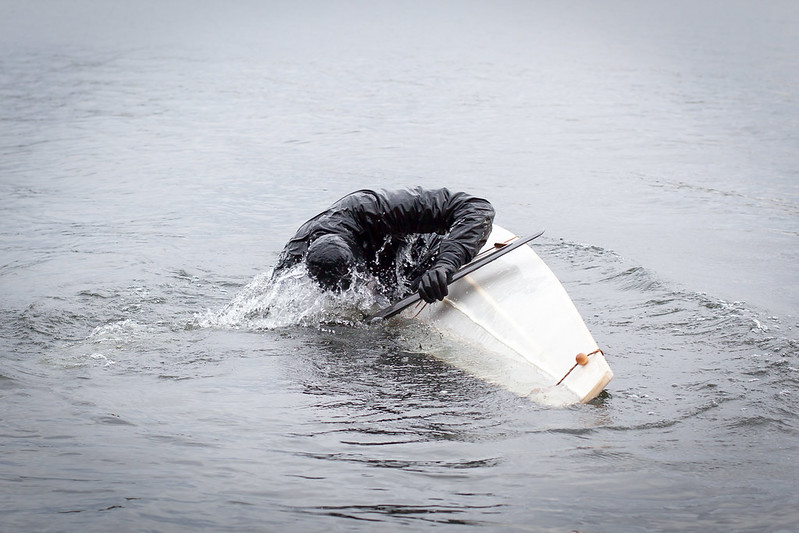 One of the principles described above entails ending in a brace position. Greenland rolling helps one to develop competent sculling and bracing. Each of the rolls also has the ability to end in either a sculling or static brace position. One doesn’t need to instantly start paddling after a Greenland roll to ensure stability. Instead paddlers are able to continue the paddles motion and scull for support, providing time to compose themselves and mindfully make their next move. By extension a blown Greenland style roll can be converted seamlessly into a sculling roll enabling the roller to recover without having to return to a setup position. The ability to migrate from one roll into another in midstream provides a powerful method of dealing with tough conditions, where confused waters can create challenging conditions if you have to rely on a single roll executed at precisely the right time.
Learning how to transition between rolls, and completing my rolling recovery map has provided me the ability to enter confidently into conditions that I may otherwise have shied away from, allowing me to grow as a paddler and learn how to take advantage of my kayak’s abilities.
Next time you see a Greenland roller practicing their craft don’t dismiss them as a poser, instead I ask you to think through how you might benefit from those skills and could potentially grow in confidence as a paddler.

My wife doesn’t camp, but if she did she would use a Therm-a-Rest NeoAir XTherm.