It’s easy to find kayaking events to attend in the mid-west of the United States, it is harder to find events specifically focused on traditional paddling skills. The ISK, our local paddling club, is no exception. Of the numerous training events offered throughout the year few, if any, are focused on traditional paddling skills. Many instructors do not teach the different strokes and styles of paddling that have evolved over the years for the Greenland or Aleutian paddles, many state incorrectly that the differences are minor and only require a “tweak” to change from a Euro-blade. We are fortunate to have a group of highly skilled local instructors and mentors that are able to teach the appropriate style of strokes with each paddle type and appreciate the importance of modifying your strokes and turns with each. 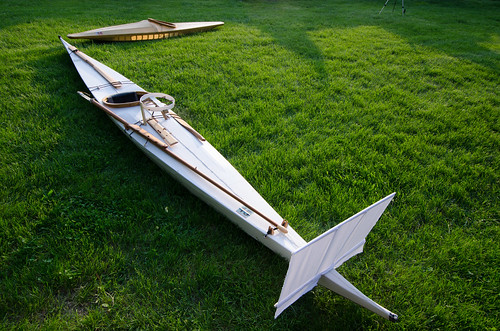 Beyond the paddle strokes there is a whole lot more traditional paddling that begs to be explored; hunting with harpoons, equipment designs like the tuilik and akuilisaq, rolling, building qajaq, carving paddles, sewing skins, bending ribs, plus a whole lot of history to learn to appreciate.

Lynette Woida and I conspired during this past winter to establish Qajaq Camp as a kickoff to a year of traditional skills events, with the hope to revitalizing the sharing and development of traditional qajaq skills within the local paddling community. Lynette and her husband Mike scouted out the perfect location for us just west of the Twin Cities on the shores of Lake Independence, replete with a group camp site and a barn big enough to hold us.

Registration for the event filled quickly. We had spots for 24 people, and there was demand for more. We kept the capacity limited as we decided an important aspect of the event was maintaining a low mentee to mentor ratio, and we wanted to feed people at the event so they could focus on the activities. Lynette did a stellar job of feeding everyone, providing a veritable feast on Friday night, tremendous soup and salads for Lunch, and coordinating a pot luck dinner on Saturday evening. 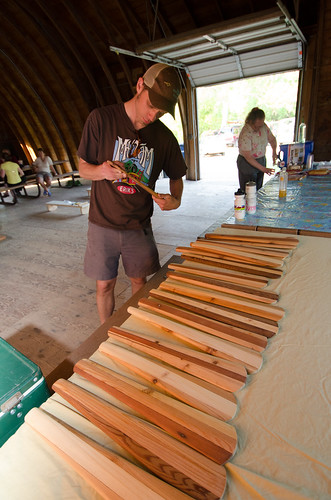 As a surprise gift Mike Woida laminated and carved a norsaq for every attendee, they were beautifully constructed and very well received by everyone that attended.

Friday afternoon there was a group paddle around the shore of Lake Independence, it was a glorious day, bright blue sky and temperatures in the mid 80’s. We kicked off the evening with a very brief welcome message from yours truly, reminding people of their responsibilities and touching on a few safety guidelines (PFDs, booze, lightening etc.) 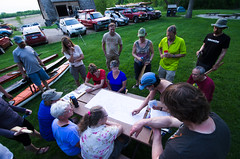 After dinner we had presentations by Renee, Tony and Sipke on the history of qajaq designs, the building methods (including hands on rib bending demos), and traditional hunting gear. The intense interest and enthusiasm of the campers told us we had both the right presenters and the right topics to get people fired up about traditional paddling. After the camp fire was lit Renee led us in smoke dancing, an ancient technique designed to keep the bugs away, it sort of worked for a few minutes, I had more than a few bite marks to show for the weekend.

On Saturday morning we held three sessions; rolling, harpooning and forward stroke. Each session was full capacity. I know from my experience mentoring with Cindy, there was a lot of learning and a great deal of progress made by many people. Many people who took part in the forward strokes session led by Pete and Renee commented on how much they learned and enjoyed the experience including the sand paddling, and paddle swap where everyone paddled with everyone else’s paddle to understand the nuances of each design principle. 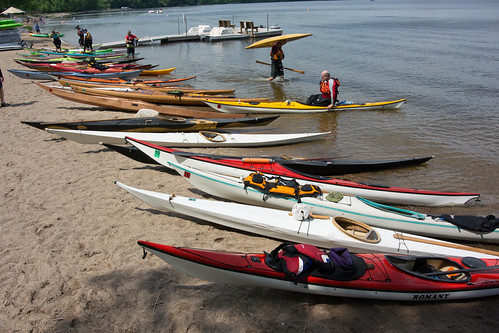 After Lunch had been served in the lake front pavilion we decided to get afloat quicker than planned as the weather radar was showing an approaching storm front. We had about 90 minutes of afloat time during which we held a maneuvers session, forward finishing rolling, forward stroke, harpooning and a few people just went for a paddle together to enjoy the afternoon. During the rolling session, we had several firsts; Fran got her clenched fist roll, and Lucia completed an excellent reverse sweep roll, Peter made progress on his offside chest scull, and Joan regained her roll.

The heavens opened a little after 2pm, and continued on and off throughout the afternoon. Many inches of rain fell, testing camping skills and equipment. 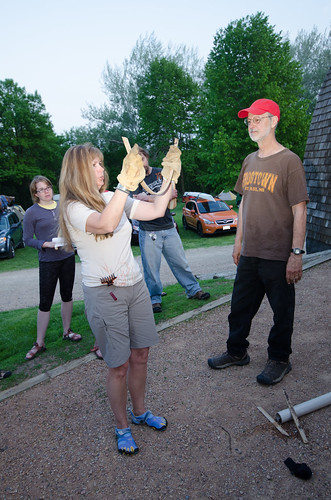 Despite the weathers attempts to put a dampener on our activities the group remained and we enjoyed the evening in the barn. The potluck supper displayed the culinary skills of many club members, I personally really liked Brock’s Moroccan dish, and Fran’s baked Brie. After the meal was cleared away we spent the rest of the evening playing Greenland skills games with the balance stools Sipke and Renee had bought. In addition there were many other balance and hand eye coordination games they had bought along. A highly competitive dominos games played out in one corner of the barn and regional micro-brews were sampled by many.

When Sunday morning finally arrived the forecast was bleak, continued lines of thunder and rain, so we broke camp and headed off home with piles of soggy tents and dry suits.

Despite the weather’s best efforts we had a great time, and feedback from the attendees has been very positive, we aim to repeat the event next year. During Saturday evening the mentors got together and have planned a few more traditional skills events for this summer and we look forward to announcing them soon.

Many more pictures from the event can be viewed here.

Thank you to Lynette, Mike, Tony, Renee, Sipke, Pete, Cindy and Dana for all their help in making Qajaq Camp a success, and thank you to the attendees for making this such a fulfilling weekend. You have all helped re-inspire me and others to continue the mentoring of traditional paddling, rolling and building skills this year.