When the ancient Inuit first took to their craft along the shores of Greenland their paddles were already influenced by generations of previous paddle carvers. The Inuit migrations from the east and west bought traditions and techniques developed along the shores of the northern Atlantic and Pacific nations. Predominately double bladed, the Inuit’s paddles evolution had been heavily influenced by the stealth and speed necessary for hunting. Modern paddlers’ needs have changed, and there are few left who subsistence hunt, so it is not surprising that the shape of their paddles has continued to evolve.
The Greenland paddle is a powerful tool. Many people seem only to associate them with kayak rolling. This stereotyping is probably exacerbated by people like me publishing rolling videos and there being few published articles on the use of the paddle for that at which it really excels; paddling forward and maneuvering the kayak. Many long distance paddling records have been set using Greenland paddles; remember the speed record set by Jo O’Blenis circumnavigating Vancouver Island? That was set with a Greenland paddle. Remember James Manke’s trip down the Grand Canyon last year? That was completed exclusively with a Greenland Paddle. When using the appropriate size and style of Greenland paddle for the conditions, and with the appropriate training, the Greenland paddle can excel in nearly all environments and conditions. Is it perfect? That is up to you to determine. What I hope to do is to make sure you appreciate the nuances of the Greenland paddle design, and hence help you on your quest for the perfect paddle. 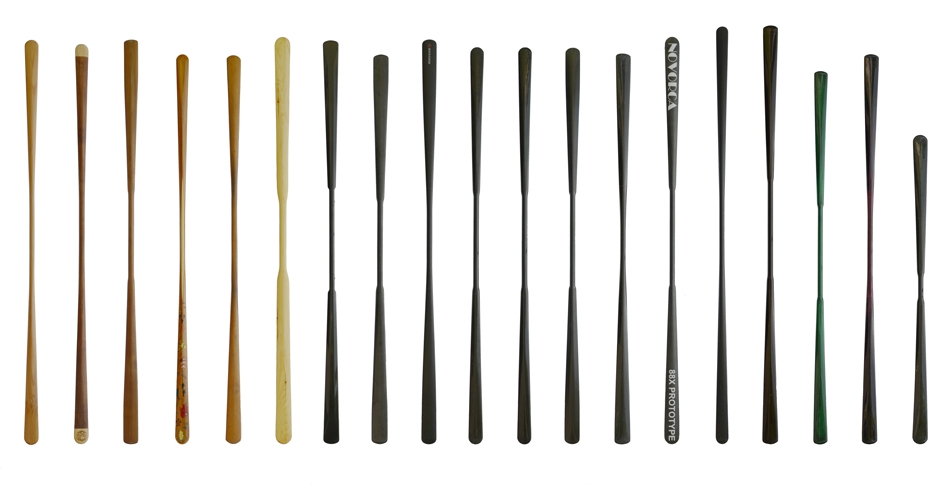 Much has been written about the principle that Greenland Paddles are sized based upon a set of anthropomorphic rules. These rules are well documented on many of the Traditional paddling websites. Length, width, Loom size, shoulder position etc. are all specified based upon the paddler’s body. One point that is frequently overlooked is that traditionally one’s kayak was also constructed using a set of anthropomorphic rules so not only did the paddle match the paddler, but the paddle also matched the kayak. Unless one is custom building a skin-on-frame kayak using the traditional measurement practices, it is very unlikely that the modern sea kayaker is paddling a kayak of similar proportions. Most modern kayaks are wider, flatter bottomed, shorter, and higher decked. The paddler is generally sitting raised up on a comfy foam or fiberglass seat, a stark contrast to sitting on a layer of animal pelts to protect your bottom from the cold water pressing the qajaq ribs into you. These changes in kayak design have resulted in corresponding changes in paddle design. We have also changed what we are doing in our kayaks. Rock hopping, surfing, river running, kayak camping, rolling competitions and racing have all evolved as kayaking has moved from a subsistence life skill to a sport and recreation. As our use of the kayaks has changed so too have the paddles we use.
If you look closely at the archives of most major paddling forums you will find plenty of raging debates questioning if the Greenland paddle is better than a Euro-blade paddle, arguing which is the “Proper paddle” for different tasks etc. My favorite remarks usually involve people hurling comments at Greenland paddlers asking when was the last time they hunted for seals. I am sure these discussions will go on for as long as there are such different designs of paddles in common use.
Rather than debate the merits let’s just assume for the rest of this article that you are one of those people who have decided, for whatever reason, that you are going to paddle with a Greenland paddle.
If you are interested in building a replica of an ancient paddle design used by the Inuit to hunt seals there are many great books published containing the surveys of all the critical dimensions of paddles that have been recovered by historians, my favorite is Kayaks of Greenland by Harvey Golden. Just as building a replica skin-on-frame hunting kayak will not necessarily result in a suitable kayak to fit you, so too building a replica paddle will not necessarily result in the perfect paddle for you. For many the point is not to build perfection: it is that recreating history can be a fun and rewarding task.
The remainder of this article is written to help those readers amongst us who want to pay homage to the origins of our paddling sport and use a traditional Greenland paddle, but wish to make it a practical, efficient and comfortable tool.
Size meets purpose and craft
Reduced to its most simple elements there are perhaps three absolutely critical design measurements on a Greenland paddle; overall length, blade width, loom length.Currently I like to paddle with three different length paddles, 84” 86” and 90”. Each paddle has a very different mix of dimensions, and each paddle has its own specialization.

Buying a paddle
I have met many people who think they have their perfect paddle. Many of these people have never had the luxury of trying and experimenting with paddles to understand the impact of the design shapes and sizes, and how they can make the difference between a good paddle and a great paddle.
Prior to investing in a commercial paddle I recommend you either try making a few paddles to understand what size and shape suits you, your paddling and your kayak, or borrow as many paddles as you can from different paddlers and find out how they feel when you put them to use. Simply picking up a Greenland paddle off a rack at a store or on a website and expecting it to be awesome is unlikely to result in you being happy together in the long term.
The quality of commercial paddles both wood and carbon varies considerably. Some manufacturers take great pride in creating works of art. Some craftspeople are highly skilled at timber selection, a vital part of the wooden paddle building process. Some are low cost, some are expensive. Some come in a whole range of sizes, some vary very little. Each is a compromise. Ask amongst your paddling friends and online network for recommendations, and read online reviews (I have published many). There are some true crafts people out there who are able to make very special paddles, maybe even your perfect paddle.

This article was published in Issue 42 of Ocean Paddler Magazine In July 2014.