I completed the Shrike-Skin qajaq project in time for my wife and my annual spring trip to the North Shore. The North Shore is the local’s term for the Minnesota Western shore of Lake Superior, and is home to a large number of State Parks and National Forest land. Each holding many treasures in the form of rivers ranging from babbling brooks to raging torrents. Each river’s character changes with the season, we like to visit in the Spring when we can witness the effects of the winter’s snow pack melting and cascading over the numerous waterfalls, plunging down the hill sides as the rivers race towards the “Ocean” as we affectionately call Lake Superior.

The trip’s primary purpose was hiking and waterfall hunting but I took the opportunity to bring the qajaq along for the ride as it presented a unique possibility for me to launch and have the maiden paddle on the Big Lake.

As luck would have it I found myself launching from the pebble beach of the East Bay at Grand Marais on a calm late afternoon. As I carried the qajaq down to the water edge, clad in my tuilik and neoprene gloves, I was prepared for the frigid water. An exclamation and the sight of running figures rapidly approaching stopped me in my tracks. A pair of photographers approached and asked if they could take my portrait, an unusual request by any ones standard. So for several minutes I stood on the beach and held the qajaq trying to look the part for them. 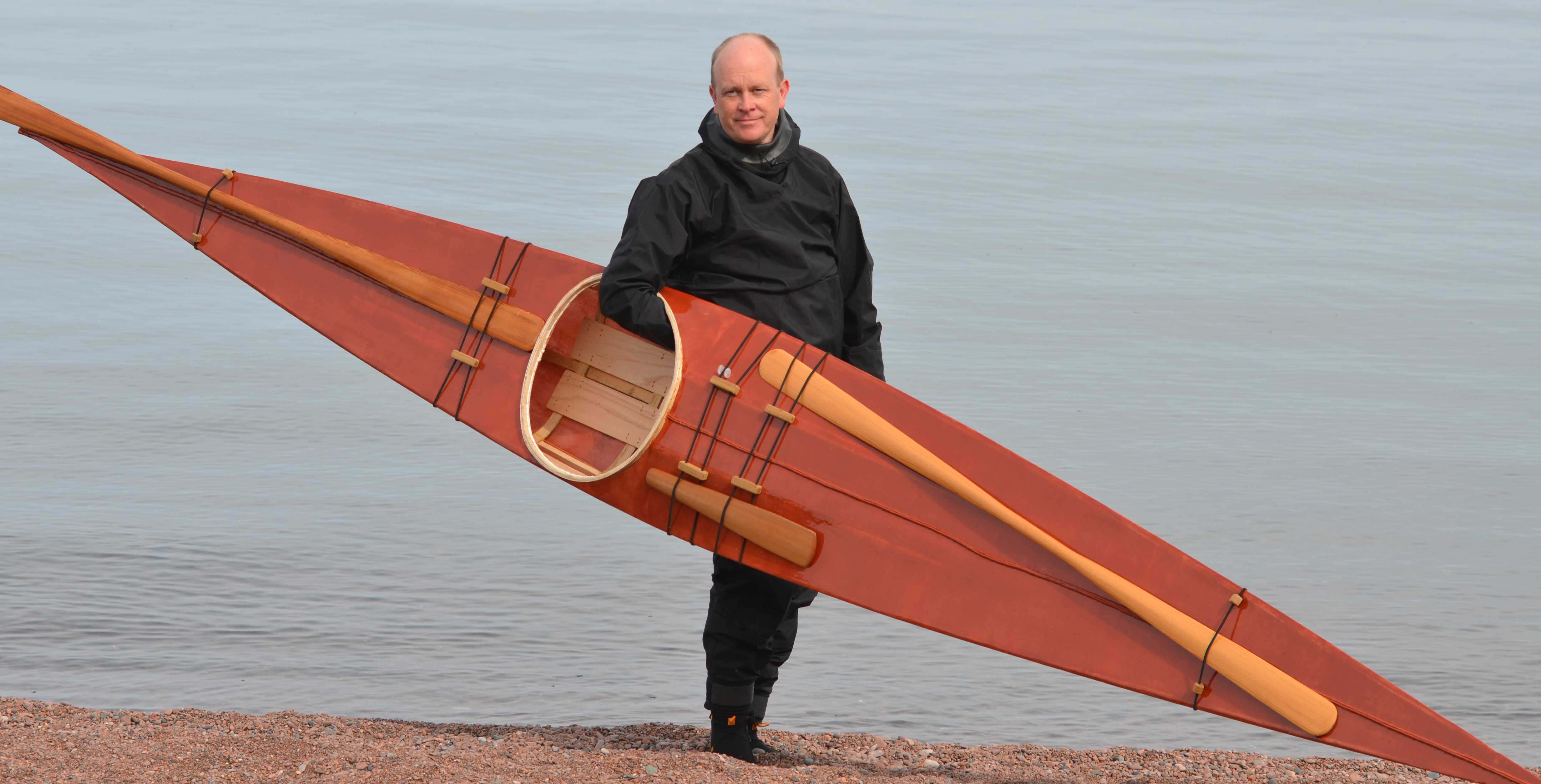 My wife stood on shore alongside them capturing the launch of my new qajaq. She learned that they were from Budget Travel Magazine, which had held a reader’s survey and Grand Marais, MN had been voted the coolest small town in the USA. The photographers were there to capture the essence of the place for an article to be published in July. They were intrigued and excited to learn what I meant when I said I would be going upside-down in a few minutes, so they stuck around for the launch.

The Shirke-Skin cockpit rim is the smallest I have ever made, in both circumference and height, at barely half an inch high it is just sufficient to capture and seal the bottom of my tuilik. It has proved more challenging than my previous designs to get situated but once it is on the tuilik has yet to pull off during use. The short cockpit rim combined with the low volume hull made entry a challenge, keeping the qajaq very flat and ensuring my weight did not go too far aft, thereby sinking the stern and allowing water to flood the cockpit. I gently slid my way into the qajaq and attached the tuilik.

I find any new launch of a home built qajaq, or qajariaq, an emotional event. Nervousness, combined with anticipation and excitement all create an unusual intensity. I had hoped originally to be able to spend some time communing with the qajaq really getting to know it  However the photographers presence created a feeling of obligation to demonstrate the capabilities of a traditionally built qajaq to the uninitiated.

I was wearing a tuilik made by Comfort Paddling, this has integrated bib-pants that create a dry suit (I have reviewed the tuilik previously you can read it here), under which I was wearing a warm fleece onesie from Reed Chill Cheater. Warm neoprene booties from Kokatat and gloves from NRS completed the thermal protection. I also was trying out the new Sinus-Saver nose plugs (amazing!). This gear combined to create a great fit with the qajaq. I pulled my self forward so the double deck beams crossed my thighs with the forward one just behind my knees, the contact was superb.

Feeling confident in the connection with the qajaq I quickly tucked and rolled into a balance brace. The water’s temperature searing my face like a furnace as I rolled through the freshly melted waters of Lake Superior. As I held the brace for what seemed like an age for the photographers, my head began to feel the pain of the cold water. The qajaq rolled with such an ease it took me by surprise how little effort was involved.

I had worked to make the qajaq a great roller using all the learning from the Shrike-R. I had added a few improvements that can only come from the skin-on-frame construction methods. First was a pair of custom made deck beams, the Masik and  Ajaaq Seeqqortarfik that I had carved specifically to be as low as they could be and still allow me to slide into the qajaq. I had shaped the ajaaq seeqqortafik to the upper curves of my thighs so It provided excellent contact. The rear cockpit coaming rests on the Ajaaq Isserfik a strong deck beam, I lowered this beam from its tradition position at the top of the gunwale to the center of the gunwale. The lower deck beam combined with the flexible skin allows the cockpit rim to press down so that the top of the cockpit rim is actually lower than the top of the gunwale when my weight is applied to it.

The Shrike-Skin hull was copied from the Shrike-R, and so had very low freeboard. When I lie back on the deck it becomes awash. Combine this low freeboard with the extremely low cockpit coaming and I found I was able to do rolls that were previously challenging, now with ease. As my confidence grew I rolled, reached through the crystal clear cold water for a rock from the bottom of the lake, and rolled up rock in hand, triumphant.

I still have a lot to learn about this amazing qajaq, I am eagerly looking forward to it. The Shrike-Skin is the first true qajaq that I have built. It was a great experience. I chose a single 2″ x 10″ x 18′ cedar plank to cut all the stringers and beams from, the ribs came from a chuck of green white oak. I purchased the skin and coating as a kit online. It was a remarkably low cost project, literally $350 and a ball of artificial sinew “string” I already had. I will be building more.