I knew something was up when Tammy yelled across the water “This is above my pay grade, we need your help”. Training camp had started as it always does with a furious paddle across Lower Herring Lake to arrive in time to hear the dinner bell on Thursday. The Lake Express ferry cancellation provoked the addition of a few hundred extra miles onto an already long trip out from Minnesota, but as has always been the case, the smiling faces, hugs and greetings of my qajaq family when I arrived, quickly pushed the journey out of my mind.

My mentoring started the next day with on land drills, working to help people discover the body positions necessary for easy rolling and recovery and allowing them to appreciate how the fit of a qajaq impacts their ability to learn and be successful at rolling before they transfer their skills to their larger modern kayaks.

I have written previously about all the great activities and training that training camp offers, this year was no exception. This is still unquestionably my favorite Qajaq USA sanctioned event of the year (read more here).  Rather than discussing the event I want to return to just one story, perhaps the headline of the event, the rising of Christine as the rolling prodigy or at very least the champion of Training Camp 2015.

Tammy was working with Christine, a new member of our Qajaq family at Training camp who was joining us for the first time, her father Mark (hence forth he will be known as “father of Christine, Champion of Training Camp”) had been a previous camper and he had convinced his daughter to come this year.

Christine is fearless in the water, I was told she played water polo, her physique, strength and comfort underwater made her the perfect candidate to learn to roll. She arrived without ever having rolled. Tammy helped her quickly transfer the on-land practice drills onto the water and Christine was happily balance bracing and butterfly rolling within minutes.

In response to Tammy’s shout I “ran” across/through the lake to see what was going on, to be greeted with a smiling tuilik clad Christine eager to do “what’s next?”. It quickly became apparent that Christine had grasped how her body moving through the water was causing the kayak to move. She was working in Tammy’s Tahe Greenland. We put her through her paces going from the butterfly roll swiftly through all the lay-back rolls in the Championship list. Culminating in the straight jacket roll which she completed on her second attempt, the elbow roll shown above came on her first attempt. I teased her that she was really beginning to irritate me with the ease with which she was advancing her skills, this simply provoked even greater engagement and success. 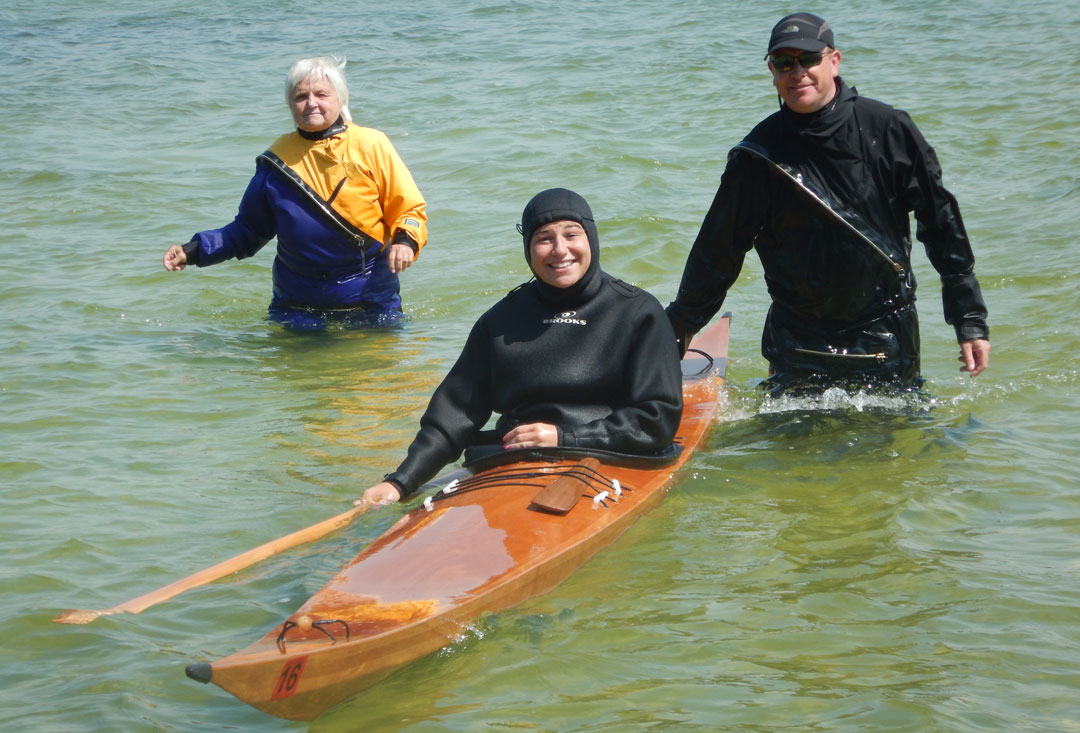 After a break I put Christine into my Shrike-R rolling hybrid and we started working on froward finishing rolls. They came just as swiftly as the lay-back rolls, checking them off sometimes with just one attempt.  The Shrike-R was foamed out and gave her better contact between her thighs and the fore-deck this helped transfer her leg drive to the hull, a real help on the forward finishing rolls.  Danielle was helping me with the mentoring at this point and it was unbelievable what we were witnessing. Christine was executing forward finishing hand rolls as if they were trivial, barely requiring any guidance or practice she executed several perfect forward finishing clenched fist rolls.

You might think that would be the end of the story, but it wasn’t. After her perfect forward finishing clenched fist roll (something I have only accomplished after days of continuous practice and stretching exercise) Christine laid back and rested for a while, then sat up and said the immortal words “What’s next?”.

A few years ago I had discussed with a friend the possibility of a forward finishing straight jacket roll, but we had dismissed it as a mythical monster akin to Sasquatch. Lacking any other challenge we started working with Christine on this roll. By now a crowd had developed on the docks watching the performance unfold in front of them. Christine quickly grasped what was going to be key to the roll. A radical ninety degree twist of her core, a huge backwards arch up to the surface and then a massive plunge down and finally across onto the center line. Her back arch was so tight and aggressive that her entire head would surface before she plunged down. It was like watching a porpoise. After 30 tries she was getting very close, she knew the actions it just came down to the timing. When her attempts failed, she recovered using a forward finishing hand roll, its self a remarkable achievement for most rollers. She rested for a while and then, after another dozen attempts she got it. The forward finishing straight jacket roll was in the bag.

If there had not been another witness standing next to me, I might have doubted it actually occurred. It was hard to believe what I had been present to see, to me it was a deeply moving and profound experience to see such a talented young lady demonstrate such a grasp of the body mechanics. Combine her athleticism with a gritty determination and desire for success and we had found our new champion. I don’t know if she will continue working on rolling. If she does I believe she will easily walk away with Qajaq Woman of the year. The next day she demonstrated the same appetite for learning on the ropes. Now we just need to help her with her forward stroke and harpooning and she will be indomitable .

Thank you Christine for coming into our qajaq family and sharing your spirit and enthusiasm with us. I feel refreshed and reinvigorated to continue my efforts to promote the qajaq culture and skills. 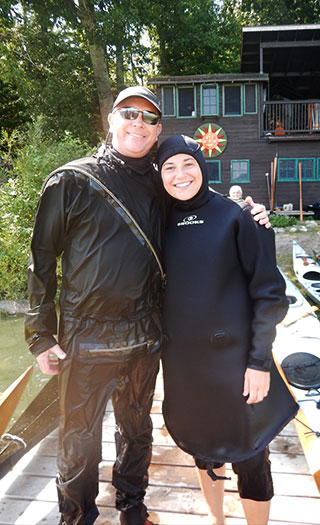 That evening we had a norsaq engraved with her new title “Champion” and we presented it to her at the camp dinner to help celebrate her accomplishment. 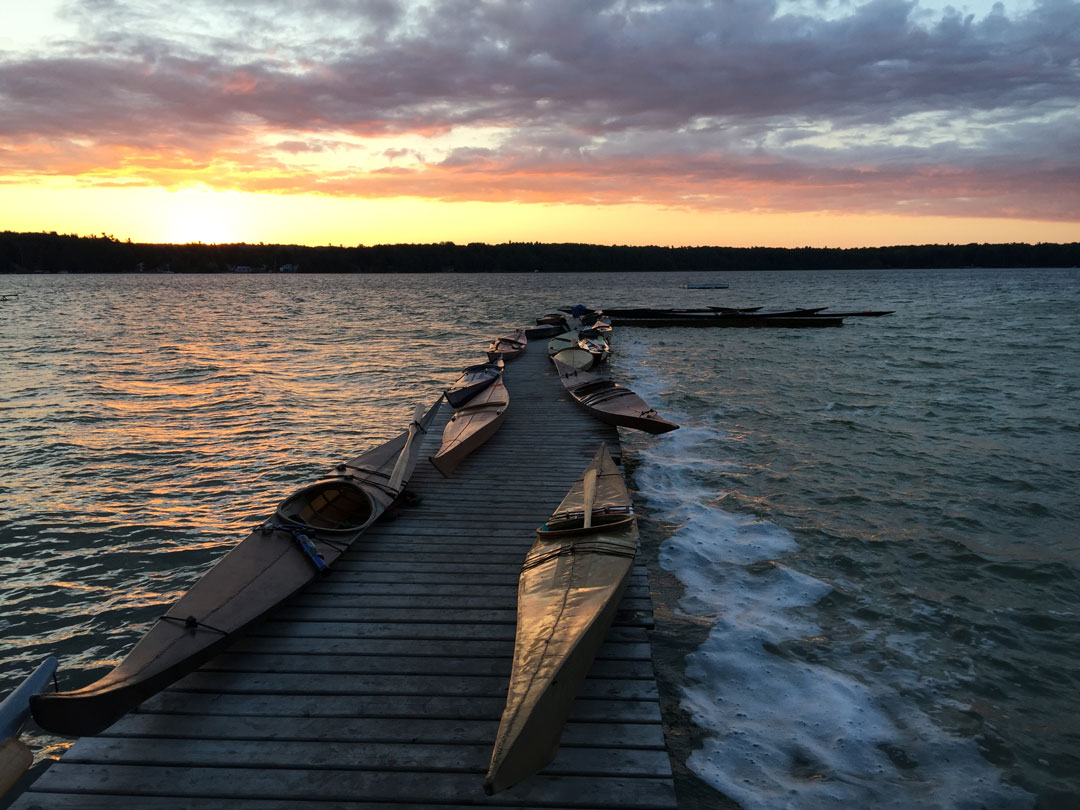 Dawn at Training Camp is always beautiful, Sunday morning was no exception. The global Greenland rolling community could be looking at the dawn of a new star – Christine.