Subtitle: How life changes are reinvigorating my kayaking.

I think it safe to assume that anyone who has read my blog posts over the past year probably already knows of my internal journey through mental trials and tribulations, so I will refrain from repeating the history of that complex, arduous, disastrous path. Needless to say, there is, and was, light at the end of the tunnel. Over time, I have come to be able to accept that the journey will make me a better person.

I don’t consider my journey a crisis, but we lack a better way of describing a transformational period during our mid-life. I am, after all, getting dangerously close to the big five oh. Things happen to me every time I am “between jobs”. Ah “between jobs”, those periods of life, when one tries to avoid, at all costs, labeling it with the societally scorned word “unemployed”. These moments provide me, albeit briefly, an opportunity to discover and invest internally in ways that the modern, over scheduled, pressure cooker lifestyle of employment rarely allows.

This past Spring was my third time through the unemployment ringer. The first time I moved continents from the UK to the USA. The second time I wrote a book, Rolling with Sticks. So, what to do the third time? How about making some major philosophical and life style changes? 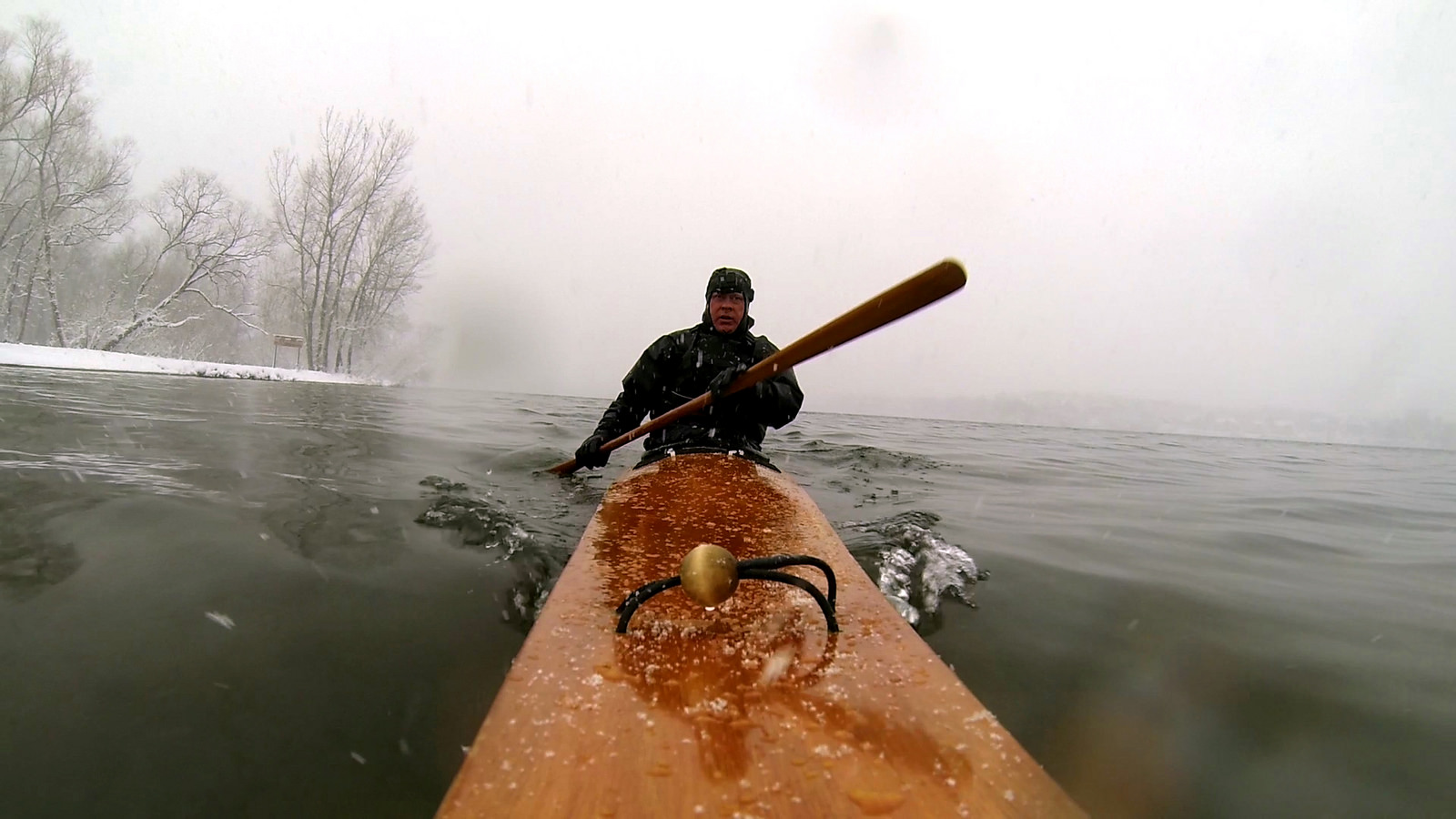 This time it all started with television. Television can be such a time suck. In the blink of an eye hours can disappear. It seemingly slows our brains like time being sucked into a black hole. For me Netflix is possibly both the worse and best way to watch TV. I have a seemingly never ending “My List” filled with content that at some point momentarily peeked my interest. One day, after having spent the morning applying for jobs, I slouched down in the sofa and flicked on the TV. The next show in my list was Samsara. The food sequence caught my attention, the beautiful filming of the diabolical conditions in which animals are housed, slaughtered, butchered and finally packaged and delivered to the supermarket. This stirred up some emotional response that led me to watch “Forks over Knives” which I followed with Cowspiracy, Farmageddon, Super Size Me, Fat sick and nearly dead, Food Inc., Cooked, An Inconvenient Truth, PlantPure Nation. The more I viewed these documentaries the clearer it came to me that my own actions were inconsistent with my belief system. So, I became a vegetarian. My motivation strangely was not the treatment of animals, for me the tipping point was understanding the inefficiency, unsustainability and environmental impact the production of meat as the protein source for the US population. So, plant based it was. I learned to bake bread from flour and water alone. I discovered the dismal availability and poor selection of locally produced vegetables in our grocery stores. And I started adding more plant based meals to our recipe collection. I am not Vegan, I still eat field raised chicken eggs and eat most cheeses. Life without cheeses is not worth living, and I have tried the god-awful vegan substitutes.

My routine check-up at the doctor’s revealed blood sugar processing levels that they defined as pre-diabetic. Psychic alarm bells sounded. It was time for me to get serious about my health before it was too late. One of the items the doctor mentioned that impacts the prognosis of pre-diabetes is alcohol consumption. At a time of high stress about a decade ago I had temporarily given up alcohol for a year, and  had been pleasantly surprised by the positive impacts it had on me. I had found it physically and mentally easy to give it up, however the social pressures of corporate life at times made it challenging to stick with. Alcohol is a great way to avoid the conflicts inside oneself, relaxing rather than resolving them. I found that I was at a time in my life where I needed to focus on resolving things rather than allowing them to fester. So, I committed to myself that I would stop drinking, for good this time. This change in lifestyle has resulted in weight loss, better sleep, a dramatic reduction in digestive problems and a much better mood on Monday mornings.

I suck at maintain a regular workout schedule. We have a great setup in our basement, treadmill, elliptical, rowing machine, free weights etc. but somehow my mind nearly always decides that snoozing is far more important. With the freedom of no regular working hours, I decided to try some yoga at the local studio which was offering a free class. I have always enjoyed yoga, but had rarely partaken in its practice. Many Qajaq USA events provide early morning sessions, some of which I had risen for and enjoyed. I don’t believe in destiny, but if I did, then this was a destined moment. The perfect moment in my life, my mind wrapped around a stick tormenting me, a lot of time on my hands, a local studio and a great teacher. I found my peace. I discovered that the time spent practicing yoga was able to clear my mind completely and focus attention inwards on improving myself. I now try and practice four times a week. I usually attend Vinyasa classes, with occasional Yin Restorative and Bikram sessions thrown in for variety. My strength, flexibility and endurance have all improved. My teacher tells me I am her most dedicated student. I like to practice each pose deeply and flow with a deliberation and precision of movement. I find that when executed in this manner even the most basic flow can become challenging, and thus provide an opportunity for the continuous development that I seek.

Let’s face it, shaving sucks, whether it is one’s face or a bikini line, the act of dragging a sharp blade across your skin is a time-consuming task that needs to be handled delicately and is fraught with potential risks. It has been my habit to rarely shave on vacations. Instead I gave myself a break from the ritual, and my skin a chance to enjoy its freedom from the blade. A paddling trip this Summer to the Boundary Waters Canoe Area Wilderness provided me the opportunity to develop a scruffy start of a beard, and rather than bothering to shave it I allowed it to grow. Like the beard itself, both Jacquelyn and I have grown to like it. Better still, it keeps me warm when paddling in the Minnesota winter months.

Part of my mental journey of recovery (see earlier post for background) has been to establish lists; reminders of what is important and good in life, people to call for help, and what to do when I am descending into the whirling pit of self-hate that hides out in my diseased mind. Lists are great, but I never seem to have them in my hand at the moments when they could be useful. Two things are front and center on my lists, my love for my life partner and wife, and my passion for kayaking. So now they are on my right and left forearm. I have Jacquelyn’s name in script on my left arm, perfectly positioned to remind me of the loveliness I get to go home to. And on my right arm is a historically accurate line drawing of a nineteenth century west Greenland qajaq and paddle. Both reminders help me daily. I think Jacquelyn was shocked when I had the ink work done, she loves the commitment it expresses and the reminder of how important we are to each other.

My phone’s alarm buzzes twice each day, once as a reminder to take my pills, and the other to remind me to make time for myself. The mental cleansing that yoga provides me led me to try meditation. Often, we fall asleep listening to a guided meditation, and now, each morning, I give myself ten minutes to meditate quietly in my own space, centering myself and allowing my mind to become clear and focused. Not only does it change my internal outlook, it also allows me to project externally a happier version of myself. Less self-absorbed with whatever challenge my mind had been preoccupied solving.

So yes, I have experienced rather a lot of changes in these past twelve months, I am currently a bearded, tattooed, vegetarian, teetotal, Yogi, Greenland paddler who meditates every day, and I love it.

Okay, so the title of this post referenced the impact on kayaking, and so I suppose I have an obligation to connect the dots. The outcome of all these changes has been to improve the way I think, and feel. My head is clearer and my body is fitter. I have become a more efficient human. The fitness and focus have both helped and been helped by my obsession with kayaking. I am able now to perform kayak rolls using body motions that previously were out of reach. I can paddle further with less fatigue. I can make better decisions and be a better companion to my fellow paddlers. The beard doesn’t really help, it messes with the seal of my tuilik. However, it does seem to keep me warmer. I am not complaining. My tattoos are a reminder on those days when I can’t get afloat that I have a lifetime of paddles ahead of me with Jacquelyn by my side (or in front).

My life is good, I intend to live it well.

Why I use a Greenland Paddle